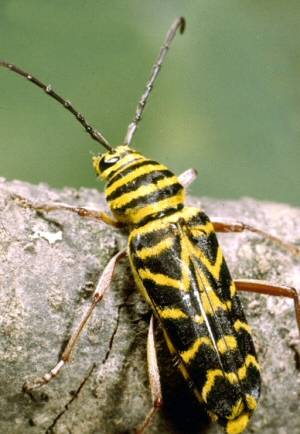 This species is restricted to black locust (Robinia pseudoacacia). It is not known to attack other species of Robinia, nor does it damage honeylocust.

Larvae tunnel into and through the trunk and limbs of infested trees, physically weakening them and making them susceptible to wind breakage. Repeated attacks often result in the production of little more than sprout growth. Many of the trees used in reforestation and land reclamation have been planted in soils badly eroded by wind or water and severely depleted of soil nutrients by poor fanning practices. Trees growing on such poor sites are especially susceptible to borer attack and often suffer serious damage during periods of prolonged drought. The degree of damage varies in different locations according to tree vigor and the influence of environmental factors such as light, temperature, drought, fire, grazing. and pruning. As the vigor of the tree increases, the borer damage decreases; within locust stands older than 10 years, the thrifty dominant trees are able to overcome attack; but the slowly growing overtopped trees are badly damaged or killed. 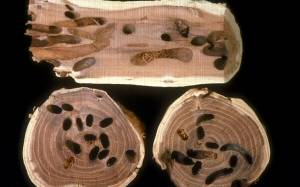 Adults are active in the late summer and fall, late August through October. They are commonly seen feeding on the pollen of goldenrod blossoms during the morning hours. Later in the day, sometimes well after sunset, they are seen on the trunks of black locust trees searching for egg laying sites. Eggs are usually deposited in rough bark crevices and around wounds on the trunks of living trees. Newly hatched larvae bore into the inner bark and construct small hibernation cells in which they spend the winter. Activity is resumed in the spring when the leaf buds begin to swell. At this time, oozing sap may be seen around larval entry holes in the trunk. The larvae soon bore into the wood where they continue to feed until mature, around mid-July. As the larva grows, it enlarges its tunnel to the exterior, through which it pushes its granular frass to the outside and through which the adult eventually emerges. There is one generation per year.

The adult beetles are about 3/4 inch long. Their jet black background color is marked with bright yellow bands extending across the thorax and wing covers, the third band on the wings being W-shaped. The legs are reddish and antennae are moderately long and black. They closely resemble the painted hickory borer but are active in the fall instead of the spring. Full grown larvae are legless, white, robust, and about 1 inch long.