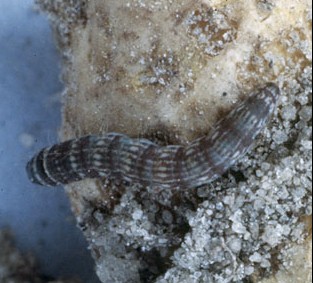 Injury is caused when a larva bores into the stalk of a host plant, thereby disrupting the growing point. Damage can be slight, or it can kill the plant. Stalk breakage can occur when larger plants are attacked. The larvae bore into pegs and developing pods of peanuts, and they may feed on the roots of host plants. Damage is most prevalent in crops grown on sandy soils during dry conditions.

This insect can overwinter as a larva or pupa. They usually spend most of the winter as larvae and pupate in late winter or early spring. Moths emerge early in the spring and lay eggs on or near the hosts leaves or stems. The eggs hatch in two to seven days. Larvae may first feed on leaves or roots or tunnel up the main stem of a plant. Later they construct underground silken tubes or burrows from which they bore into plants near the ground line. They become full grown in two to three weeks, leave their burrows, and spin silken cocoons under trash on the surface of the ground. In these cocoons, they change to pupae from which moths emerge in two to three weeks. There appears to be at least four generations per year in Oklahoma.

The male moth has brownish yellow front wings with grayish margins and several dark spots. The female's front wings are nearly black. The wing spread is about 1 inch. The larvae are slender, bluish green, brown-striped caterpillars about 3/4 inch long when mature. Larvae become very active and thrash about violently when disturbed.