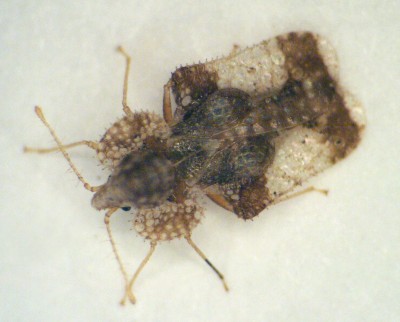 Most lace bugs have very specific host preferences. The sycamore lace bug feeds on sycamore, the elm lace bug on American elm, the oak lace bug on oaks, and the hawthorn lace bug on pyracantha, hawthorn, and quince. Other Oklahoma species of Corythucha feed on buckeye, black cherry, black walnut, hickory, alder and birch. One species feeds on sunflowers and related plants.

Various species of Corythucha can be found over the entire U.S. and in all parts of Oklahoma where their host plants are present.

Feeding causes yellow or white (chlorotic) spots to appear on the upper surface of the leaf. These are similar to leafhopper and spider mite damage but usually more extensive. Positive identification of lace bug damage is confirmed by the presence of shiny, black droplets of excrement on the underside of damaged leaves. Frequently, the cast skins of the nymphs remain attached to the underside of the leaves. 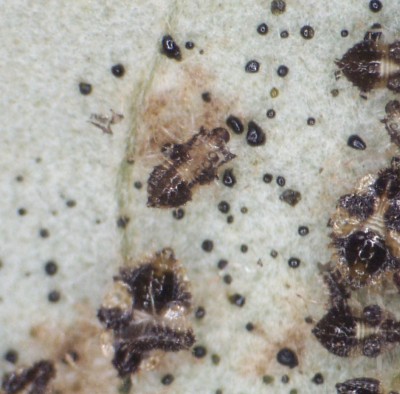 Lace bugs overwinter as adults in bark crevices, branch crotches, or similar protected areas of their host plants. They emerge about the time leaves of the host develop in the spring. Small black eggs are attached to the underside of leaves with a sticky brown substance. Within a few days, the eggs hatch and nymphs begin feeding on the leaves. With their sucking mouthparts they pierce the leaf and withdraw fluids and cell contents. A complete life cycle, from egg to adult, may be completed in approximately 30 days. Several generations occur each year in Oklahoma.

Adult lace bugs have beautifully sculptured wings that resemble an intricate, lacy network. There are also lacy extensions at each side on the front part of the body and an expanded, lacy hood that extends over the head. Some species are almost entirely white while others are marked with black or brown. They range in size from 1/8 to 3/16 inch. Nymphs do not have wings but usually have spines on the back.