More than 400 plant species within 95 families are susceptible to attack by this pest. Adult beetles not only damage numerous ornamental herbaceous plants, shrubs, vines and trees, but also small fruits, tree fruits, row crops, and many other plants. Beetle grubs will attack turf (lawns, golf courses, and pastures) and the roots of many other crop and ornamental plants.

These grubs feed primarily on the roots of grasses and other plants. Beetles devour leaves as well as flowers. Leaf tissue is eaten between the veins so that the foliage looks somewhat lace-like.

The beetle's life cycle takes one year in most established areas within the United States, only in the northern extremes does its life cycle require two years. The pest spends approx. ten months underground as a grub-like larvae. In Oklahoma, adults emerge from the soil in mid-summer (June to September). After mating, the female lays eggs 2 to 6 inches in the soil to start the cycle over again. 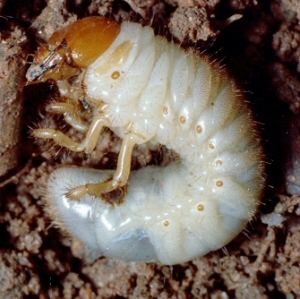 The Japanese beetle is brilliantly colored, oval, and less than half an inch long. Wing colors are coppery with fine longitudinal lines, and the body is a beautiful metallic green. The five tufts of white hairs projecting from under the wing covers on each side and the two patches of white hairs at the tip of the abdomen are the distinguishing characteristics.