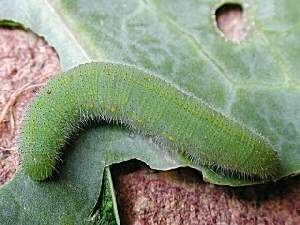 The imported cabbageworm prefers cabbage, broccoli, and cauliflower but will feed on turnip, collards, kale, radish, mustard, horseradish, and lettuce. The first generation may develop on wild hosts of the family Cruciferae if cultivated hosts are not available. 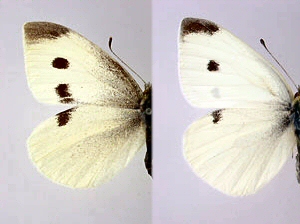 Damage appears as irregularly shaped holes of various sizes and the presence of masses of wet, greenish brown excrement deep among the leaves. Younger larvae feed on the outer leaves and older larvae feed on the more succulent, inner leaves. Unlike cabbage loopers, imported cabbageworms tend to bore into the center of the head (in cabbage) thereby doing more damage to the edible portion of the plant. If large numbers of larvae occur on small plants, they may kill the plants, severely stunt plants, or prevent head formation in cabbage and cauliflower. Infestations beginning near harvest may be ignored if control has previously been achieved as the outer leaves of most brassicas are not harvested and do not need to be free of damage.

The overwintering stage is a pupa attached to host plant debris. The butterflies emerge in early spring, usually sometime in March. Each female will deposit several hundred eggs, one at a time, on the leaves of host plants. Eggs hatch in four to eight days and larvae feed for 10 to 14 days before pupating. Pupae may be on the host plant or on nearby objects. The pupal stage lasts 7 to 12 days. There are four generations per year in Oklahoma and activity will continue until October or early November.

The adult is a white butterfly with a black area near the tip of each front wing and a black spot on the front edge of each hind wing. The female has two other black spots on each front wing while the male has one. The eggs are pale yellow and bullet-shaped. They are ribbed lengthwise and crosswise and are laid on end on the leaf surface. Larvae are green with a faint yellow stripe down the back and a row of faint yellow spots on each side. They have a velvety appearance because of numerous short hairs on the body. There are five pairs of prolegs on the abdomen and they are about 11/4 inches long when mature. Pupae are sharply angled and green, gray, or brown in color. They are attached to the lower leaf surface by a silken loop.