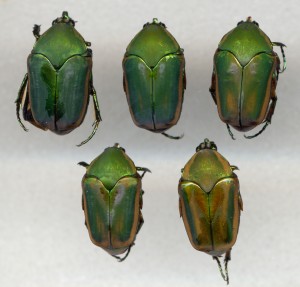 The beetles injure fruits of many kinds, including grapes, peaches, raspberry, blackberry, apple, pear, quince, plum, prune, apricot, and nectarine, and frequently feed as well on the sap of oak, maple, and other trees, and on the growing ears of com. They are attracted to ripe (especially overripe) fruits. The larvae feed on decaying organic matter in the soil or in well-rotted manure or compost piles. 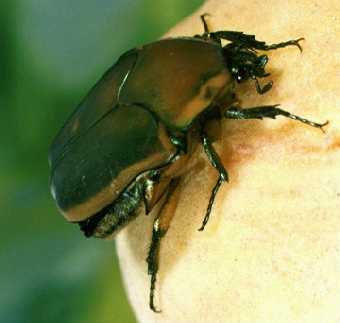 Adult beetles damage fruit by feeding on ripening fruits. Beetles gain entry into undamaged fruits by gouging with the horn on the front of the head, then feed on the flesh of the fruit. Several beetles may bury themselves entirely in a ripe peach. Their odor and excrement ruins most pieces of fruit they visit even if feeding damage is not severe.

This insect overwinters as a nearly mature larva in the soil. They feed and finish maturing in the spring and pupate in a cell in the soil. A few beetles may emerge in late May or early June, but most do not emerge until mid-June. They are common in July and August and some remain active through early October. Eggs are laid in late summer. The female beetles prefer sandy soil that is high in humus or organic matter. They burrow into the soil and lay their eggs 6 to 8 inches below the surface. The eggs hatch in about 2 weeks and the larvae feed on organic matter in the soil until winter approaches. There is one generation per year.

This beetle is larger and more robust than its close relatives, the common brown May/June beetles, measuring from 3/4 to 1 inch in length and about 1/2 inch wide. The color varies from dull brown with irregular stripes of green to uniform velvet green, the margins of the body being usually light brown varying to orange yellow. The lower surface is metallic greenish or yellow, or metallic dark brown with a yellow green tint. It is sometimes mistaken for the Japanese beetle, which is smaller (1/2 inch long) with brown wing covers margined with green. The larva is a typical white grub with a brown head and three pairs of short legs, but it is not as often found curled into a C-shape as are most white grubs. They are about 2 inches long when mature. Live larvae are easily distinguished by their habit of crawling on their backs.