The leaf rolls and folds made by the larvae and their feeding damage reduces leaf area, thus restricting the leaf in its function of making food for the vines. In severe infestations, the resulting defoliation may expose the berries to sunburn. Larvae occasionally feed on the fruit, breaking the skins of the berries and permitting the entrance of spoilage organisms. 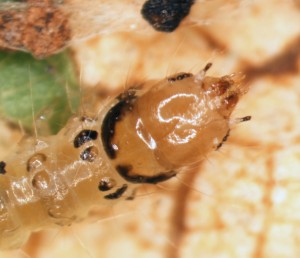 This insect overwinters as a pupa in a cocoon, mostly among leaf litter on the ground. The adults begin emerging in May. Eggs are laid singly on the leaves, often in the angles between a vein and the leaf surface. Smoother surfaces are preferred for egg laying. Newly hatched larvae feed in groups between leaves that they have webbed together. After about two weeks the larvae begin to roll the edges of the leaves and feed singly in these rolls. These rolls are made by spinning strands of silk from the edge of the leaf to points nearer the center. As the silk strands dry, they contract and bend the edge of the leaf. Other strands are then made that curl the edge of the leaf into a roll. The upper leaf surface almost always forms the outside of the roll. After reaching full growth, the larvae pupate in a small leaf fold or envelope at the edge of the leaf. There are probably only two generations per year in Oklahoma, but a partial third generation may occur in some years as larvae have been found in late September. 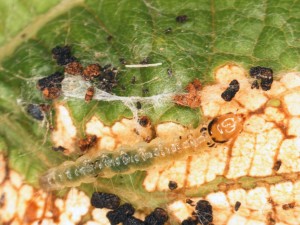 The adult is a very dark brown, almost black, moth with a wingspread of about 1 inch. The front wings each have two white spots. The hindwings of the female also have two white spots, while those of the male have only one large white spot. There are two white bands across the abdomen. The male antennae are thickened and distorted in the center; the female antennae are smooth. Young larvae have a pale yellow green, translucent appearance but when they begin to feed the ingested leaf tissue gives them a bright green color.