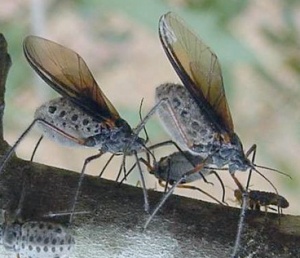 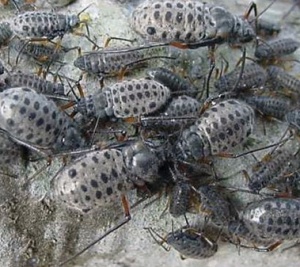 This aphid sucks sap through the bark of small branches. Serious damage is seldom reported in Oklahoma but can occur. Heavy infestations can kill infested twigs or branches. This species produces large amounts of honeydew which may fall on sidewalks, parked cars, etc. under infested trees.

Activity usually begins in late April in Oklahoma. An adult female gives birth to live young and a colony is formed on the underside of the branches of the host tree. Several generations occur during the summer and fall. Activity continues into mid-November in some years. Late in the fall females lay eggs in bark crevices or on the smooth bark of smaller limbs. The eggs are yellow when laid but later turn black. They are the overwintering stage.

This is the largest aphid in North America with adults averaging about 1/4 inch long. They also have long legs which makes them appear even larger. Males and some females are winged but egg laying females are wingless. They are brown with black markings (giving them somewhat of a mottled appearance) and have short, black cornicles. When alive they are often partially covered with a bluish white, waxy secretion.