This scale attacks many species and varieties of euonymus. It is occasionally found on several other plants, including camellia, celastrus, ivy, hibiscus, holly, and ligustrum.

Euonymus scale is often overlooked until it has caused serious damage. One symptom of a light attack is the occurrence of yellowish or whitish spots on the leaves. The female scales are usually found along the stems and leaf veins of the host plant. At times, however, the whole plant is "whitened" by the covers of the smaller male scales. When this occurs, the plants leaves may drop and sometimes a normally green plant becomes bare by midsummer. Heavily infested plants are usually killed if not treated. Plants growing close to buildings seem to be damaged more than those growing where there is free air circulation. 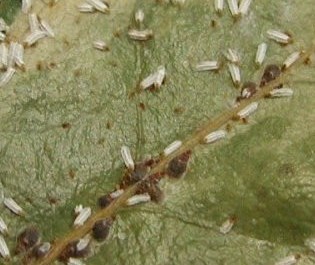 The scales overwinter as fully grown, fertilized females. Eggs are deposited under the female scale in the early spring. Egg laying and hatching occurs over an extended period from mid-April to mid-June in Oklahoma. The newly hatched nymphs (crawlers) move to other parts of the host plant or are blown by wind to other susceptible hosts. They soon settle and begin to feed. There are three more generations during July, August, and September.

The female scales are brown or dark brown, pear shaped, and slightly over 1/16 inch long. The exuviae (first molted skin) is at the narrow end. Male scales are elongate, tiny and chalky white in color with the exuviae at one end. As usual with armored scales, the actual body of the female is yellowish and sac-like with well developed mouthparts but without legs, eyes, or antennae. The adult male is a small, gnat-like insect.