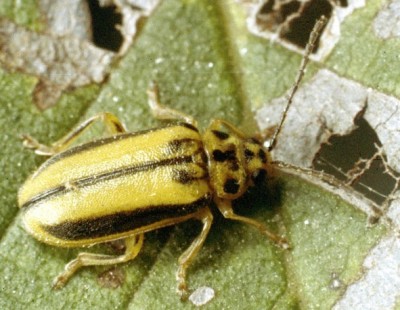 The elm leaf beetle is an introduced pest from Europe which feeds only on elm. Although most elm species are subject to attack, the beetles usually prefer Siberian elm and hybrid elms. The true Chinese elm is seldom attacked, and the American elm seldom suffers any significant damage from this pest.

Elm leaf beetle feeding damage may result in partial or complete defoliation of the tree. Severely damaged/eaten leaves will turn brown and often drop prematurely. Sometimes the entire tree may be defoliated by mid-summer. Most of the damage is caused by the larvae as they feed on the lower side of the leaves. Trees which lose their leaves as a result of elm leaf beetle damage commonly put out a new flush of growth which may also be consumed by the insects on the tree or later generations of larvae. Feeding damage by elm leaf beetles seldom kills an elm tree. However, severe feeding will weaken a tree, making it more susceptible to attack by other pests. 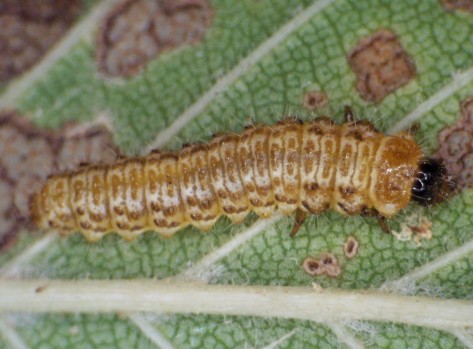 Elm leaf beetles overwinter as adult beetles in houses (where they are a nuisance), sheds, and protected places out-of-doors (under loose bark or house shingles). Adults emerge from their overwintering quarters during late April to early May, fly to nearby elms, mate, and lay eggs. The adults eat small, circular holes in the expanding leaves. The orange-yellow, spindle-shaped eggs are laid on end in groups of five to 25, always in parallel rows on the underside of leaves. A female will lay 600 to 800 eggs in her lifetime. Small black larvae feed on the undersurface of the leaves for about three weeks. Larvae feed in groups, eating the undersides of the leaves, leaving only the upper leaf surface intact, giving a skeletonized appearance. At the end of the feeding period (larval stage), the larvae move to the lower parts of the tree to pupate in cracks, crevices, or crotches on the trunk or larger limbs. Adults emerge in about eight days and lay second generation eggs. In Oklahoma, there are three full generations and sometimes a partial or complete fourth generation of elm leaf beetles.

Adults are about one-fourth inch long, yellow to olive green, with dark stripes along the outer edge of each wing cover. Mature larvae are about one-half inch in length, dull yellow, with two black stripes down the back.