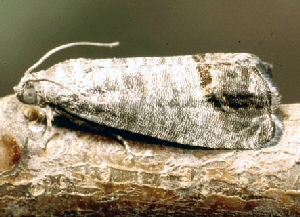 Apples are the most important host, but the codling moth will also attack pears, walnut, quince, crabapples, hawthorn, loquat, and some stone fruits, mainly apricots.

This is the primary pest causing "wormy" apples. The larval stage does the damage, tunneling in the fruit to eat the seeds and inner tissue. First generation larvae enter through the blossom end while second generation larvae are more likely to enter through the side of the fruit. This tunneling also leaves openings for disease organisms to enter.

The codling moth overwinters as larvae in cocoons. The cocoons may be found in tree crotches, branches, weeds, grass, litter, or any other protected place near the tree. They pupate in the spring and adults begin emerging sometime in April, about the time apple trees are in bloom. The adults mate and the females lay eggs at sunset when the temperature reaches 65 F or higher for two or more days. The eggs, about 75 to 100 per female, are laid singly on leaves and branches. The eggs hatch in 5 to 12 days, depending on the temperature. Newly hatched larvae crawl to the fruit and tunnel in at the blossom end. Larvae feed inside the fruit until maturity, generally 2 to 4 weeks. Mature larvae emerge from the fruit and pupate in protected places. New adults emerge in 8 to 20 days, beginning sometime in June. A second generation of larvae feeds in July and second generation moths emerge in August. A small third generation of larvae feeds in September. Some of the second generation and all of the third generation larvae overwinter.

The adult moth has gray to brown front wings with gray crosslines and a characteristic coppery brown spot near the tip of each wing. The hindwings are pale with fringed borders. The wing spread is about 3/4 inch. The eggs are transparent, flattened, and about the size of a pinhead. They develop a red ring and darken just before hatching. Young larvae are white with a dark head but older larvae are pink with a mottled brown head. They are about 3/4 inch long when fully developed.