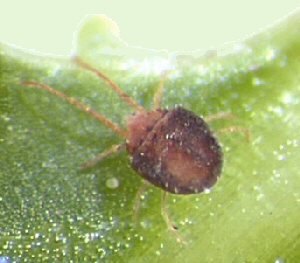 The clover mite is a plant feeder with a long list of known hosts. These include legumes (such as alfalfa, peas, and clovers), various weed species found in lawns, lawn grasses, certain ornamental plants and shrubs, and trees. 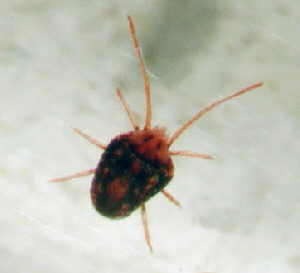 Clover mites seldom cause much damage to plants, but high numbers can cause a "silvered" appearance due to the loss of chlorophyll. They become a problem when they invade homes or other buildings. This happens most commonly in March and April in Oklahoma but has also occurred during the fall and early winter months. They do not feed on anything in the home but can leave a reddish orange stain if they are crushed on curtains, bedspreads, furniture, walls, or carpets.

Adult females lay small, round, red eggs in bark crevices at the bases of trees or in the cracks and crevices of buildings. Most eggs are laid in the spring before temperatures reach 85 F. The adults then die and the eggs remain dormant during the summer. Eggs begin to hatch in the fall as temperatures drop below 85 F. Optimum egg hatch occurs at 65-70 F and with high humidity. The mites feed and develop during the fall, warm periods in the winter, and in the spring when temperatures are above 45 F. Males have never been found in this species. Some populations (or species) have one generation per year while others have several.

Clover mites are very small (about 1/30 inch long) and red or brown in color. They have eight legs and are not insects (they are close relatives of ticks and spiders). They can be identified by the flattened, scale-like hairs on the top of the body and the long front pair of legs that extend forward, often giving the appearance of antennae. There is some controversy about whether this is one species or a complex of closely related species. If the house-invading clover mite is considered a separate species, it will be named B. borealis Oudemans.