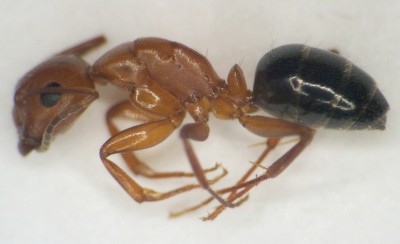 Carpenter ants rarely cause structural damage to buildings. Although most carpenter ant damage is cosmetic, the ants are nevertheless considered serious pests by homeowners. Under natural conditions, carpenter ants nest in live and dead trees and in rotting logs and stumps. However, they will also construct their nests in houses, telephone poles, and other man-made wooden structures. Nests are begun in deteriorating wood which has been exposed to moisture. Often, the colony will extend its nest to adjacent, sound wood. Nests are commonly found in porch pillars and roofs, window sills, and wood in contact with soil. 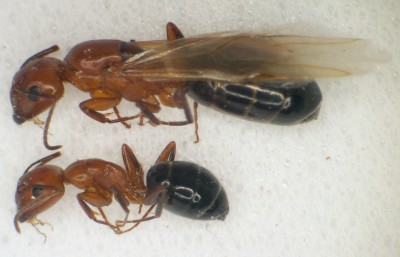 The colonies of carpenter ants are often long lived. Each colony is founded by a single fertilized queen. She establishes a nesting site in a cavity in wood. She then rears her first brood of workers, feeding them salivary secretions. She does not leave the nest nor feed herself throughout this period. The workers which are reared first assume the task of gathering food with which to feed the younger larvae. As the food supply becomes more constant, the colony population grows very rapidly. A colony does not reach maturity and become capable of producing young queens and males until it contains 2,000 or more workers. It may take a colony from three to six years or more to reach this stage. Each year thereafter, the colony will continue to produce winged queens and males, which leave their nest and conduct mating flights from May through July.

Large - from 1/4 inch (6.4mm) for a worker up to 3/4 inch (19.1mm) for a queen, black, or sometimes red and black. Carpenter ants are active indoors during many months of the year, usually during the spring and summer. When ants are active in the house during late winter/early spring (February/March), the infestation (nest) is probably within the household. When carpenter ants are first seen in the spring and summer (May/June), then the nest is likely outdoors and the ants are simply coming in for food. The natural food of the ants consists of honeydew from aphids, other insects, and plant juices, but they will readily forage for water and food scraps within the house.