The nine-banded armadillo (Dasypus novemcinctus) is one of about 20 species of armadillo in the Americas, and is the only armadillo that occurs in the U.S. The word ‘armadillo’ is Spanish for ‘little armored one’, which is an apt description as they are covered with thick protective scales, and has earned the nickname of ‘possum on the half-shell’. Armadillos are mammals and have sparse hair mostly on their underside. The nine-banded armadillo typically has a single fertilized egg that splits into four, so it gives birth to four identical young. Another unique characteristic is that, while armadillo can swim, they sometimes walk under water when crossing shallow ditches. The armadillo expanded its distribution north in recent decades; however, it is sometimes reduced in numbers in northern Oklahoma following prolonged cold winters as it is not cold adapted. Armadillos do not hibernate, but they become less active during cold weather. During the winter, they are more prone to feed during the day when temperatures are warm. Armadillos feed on invertebrates such as insects and earthworms by digging in loose soil using their excellent sense of smell and long claws. They also dig up shallowly rooted annuals incidental to their foraging for invertebrates.

Armadillo digging becomes a nuisance when it happens in the home landscape. 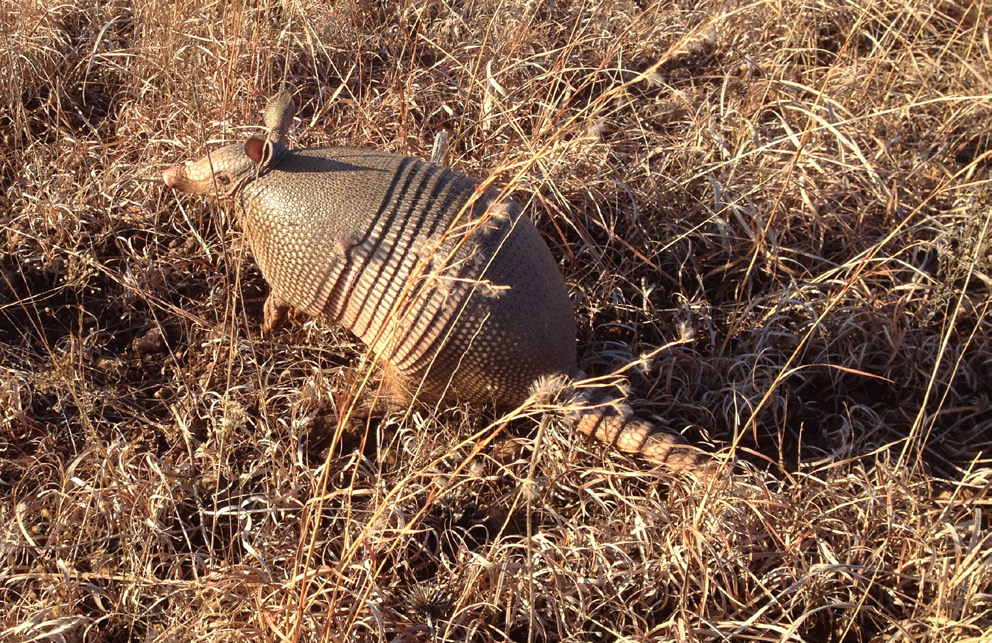 Image 1. Armadillos are common across Oklahoma and frequently cause turf damage to home lawns.

Damage from armadillo is generally most pronounced in the summer months as lawns are irrigated. This makes the soil easier to dig in and brings invertebrates closer to the surface. Armadillo damage is easy to identify as it is noted by multiple shallow holes (usually up to 6 inches). They will often root similar to pigs, especially in loose mulch. Skunk and squirrel damage can look similar, although it is usually smaller in diameter (less than 4 inches) and shallower (less than 3 inches) than armadillo damage. The armadillo generally digs burrows in forested areas. These burrows are used to rest and avoid predators.

One issue that gardeners should consider before trying to control armadillo damage is to examine their personal tolerance level. What may be considered a minor inconvenience to one gardener may be completely unacceptable to the next. This is not a trivial matter, as it determines when and where management is applied. Homeowners should be aware that there is seldom a quick and easy fix to any wildlife damage problem. Often the cost (time and money) of control exceeds the damage caused, and in this particular case, damage is mostly aesthetics or nuisance. Whether the nuisance warrants control is related to the tolerance and preference of the homeowner, so consider this before starting any control measures.

If the damage is tolerable, you may still want to fix the damage. Damage to rhizomatous grasses such as Bermudagrass is typically manageable as healthy grass can quickly fill in bare patches. Cool season grasses, such as fescue, are more problematic because the bare patches will need to be reseeded in the fall. Additionally, the extra irrigation required by cool season grasses in the Oklahoma summer make them especially attractive to armadillos. Regardless, you may want to fill in the digging with soil and turf. Digging in flower beds likewise will require some smoothing out. If you choose to fix these spots, wear gloves. Not only will this protect you from skin lacerations, it will protect you from the possibility of coming in contact with leprosy. Armadillo is the only other mammal other than humans that is known to become infected with leprosy. While the probability of infection is likely low, it is not recommended to handle armadillos or disturbed soil with bare skin. 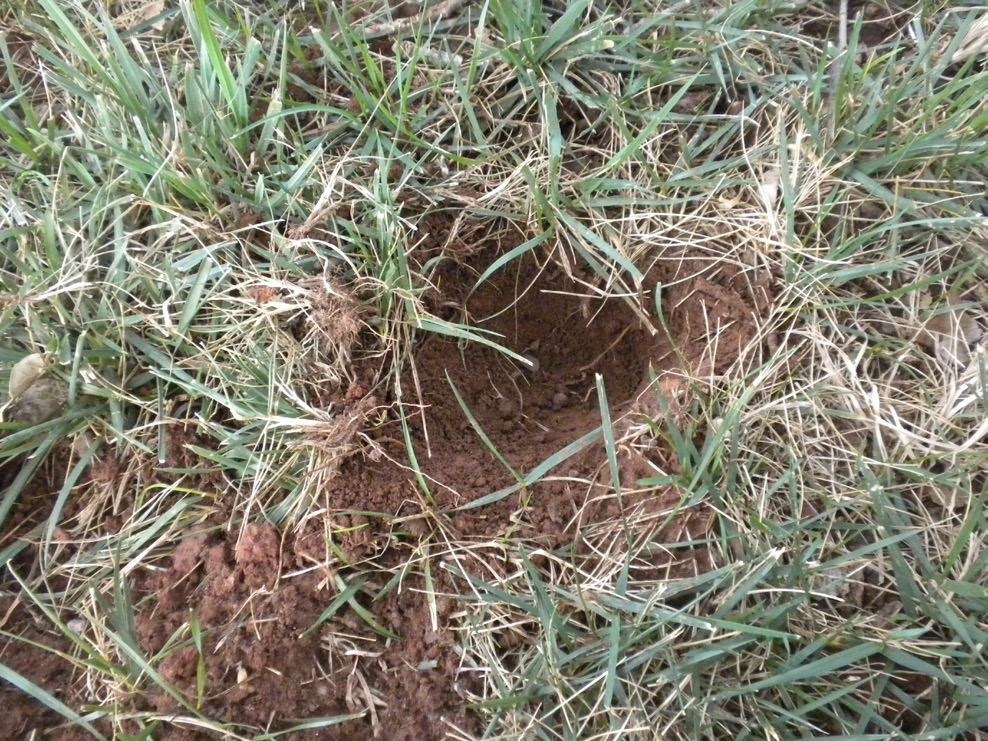 Image 2. Armadillos dig and root in lawns and mulch. Tree squirrel and skunk damage can look similar but is usually smaller in diameter and depth compared to armadillo damage.

Repellants are not considered effective for keeping armadillos out of the landscape. Similarly, scare tactics do not provide relief. Exclusion is effective to reduce armadillo damage to small garden beds. While armadillos can climb over and burrow under fences, fences generally keep armadillos out of an area. Fences more than 12 inches tall should eliminate most armadillo use, just be sure the fence fits closely to the ground to discourage armadillo from rooting under it. For lawns and other large areas, exclusion is not practical. Applying a soil insecticide to control the armadillo’s food resources is another possibility. However, if armadillos are habituated to your lawn, damage may occur for some time even if food resources are reduced. In fact, dam-age may temporarily increase as the armadillo searches for dwindling food. Additionally, soil insecticides can harm many beneficial insects. For these reasons, targeting the armadillo rather than the insect community is recommended unless there also is damage from a specific insect pest. Contact your local county Extension educator to discuss insecticide options.

Armadillos are not protected in Oklahoma and may be trapped or shot all year. Shooting is an effective method where legal. Be sure to check local ordinances regarding discharge of firearms. However, as armadillos are primarily nocturnal–especially during the summer–shooting may not be a practical control. They are most active in the very late hours of the morning (2:00 to 5:00 a.m.), at least during the hot summer months. Some homeowners have had success using a motion-activated light that rings a buzzer and wakes them up when an armadillo is present. While this can work, using a trap can get you a good night’s sleep. Note that if you approach an armadillo with the intent of killing it at close range (which is possible because they have poor eyesight), they often jump several feet off the ground when frightened, and can cause injury if you are standing too close.

Trapping is highly effective using an approximately 12-inch x 12-inch x 32-inch live catch trap. The smaller live catch traps designed for skunks are too small. Traps with doors on either end are most effective, since it doubles your chances. If you know which direction the armadillo is coming from, double door traps are not needed. With armadillo trapping, no bait is used, but rather funnels, although some homeowners report success using eggs, rotten fruit or a trap that recently had an armadillo in it. Any type of barrier can work to funnel the armadillo into the trap. Existing barriers such as walls on homes, dense vegetation and privacy fences can be used. If no existing barrier exists, use temporary fence. Poultry wire held up with rebar or other rigid stakes works well. The barrier does not need to be tall as armadillos rarely climb and will typically forage along any barrier they encounter. I recommend at least 12 inches of fence. The wire needs to be secured with rebar flush with the trap door. Do not leave any space between the trap door and the wire or the armadillo is likely to push through the gap. 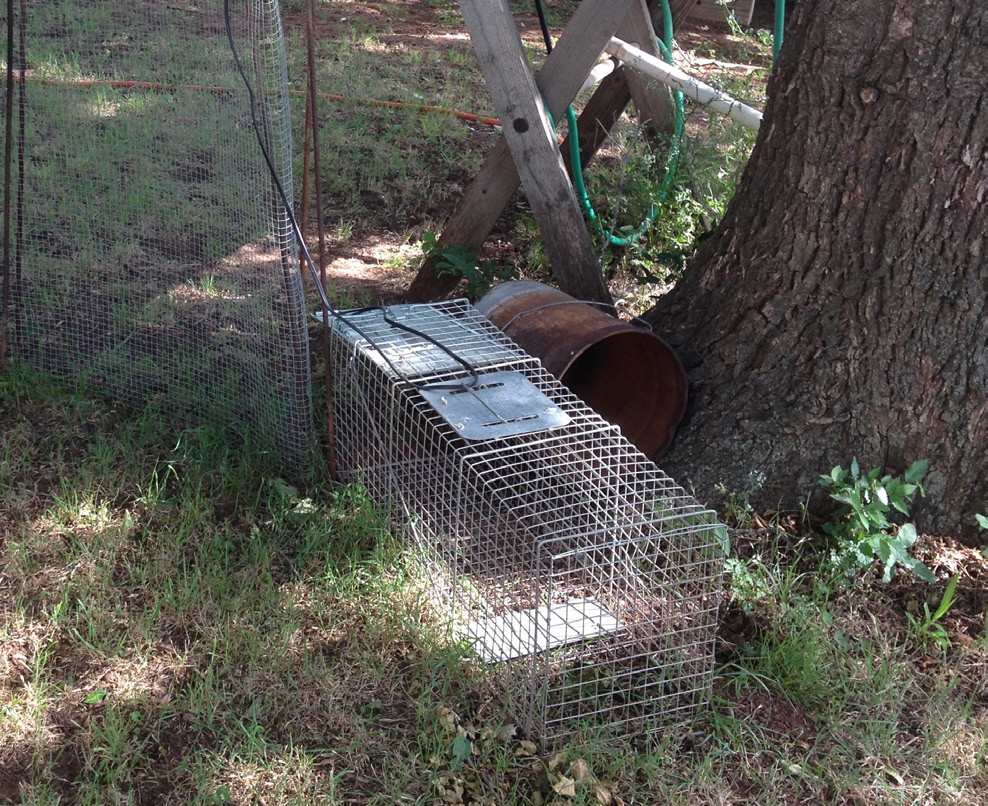 Image 3. Armadillos are generally easy to capture in a live-catch trap. While no bait is needed, the use of existing barriers and/or temporary barriers will greatly enhance capture. The idea is to create a funnel for the armadillo. This trap set has used existing barriers such as a tree to help funnel the armadillo. Notice the poultry wire held in place with rebar. Fresh soil covering the bottom of the trap would also be a good idea.

Place the trap either in the area of the landscape where damage is pronounced or where armadillos are entering the landscape (if known). If damage is frequent, assume the animal has a burrow nearby (less than 100 yards) in a wooded or riparian area. Look for burrows as a place to trap. Otherwise position funnels in the direction the armadillo is thought to be coming from to increase the chances of intercepting it. Armadillos are often attracted to freshly irrigated lawns, likely due to the smell. Think about irrigating the area around the trap to increase chances of capturing the armadillo. Another thing that can help with trap success is to line the bottom of the trap with freshly dug soil. It is unclear whether the smell of the soil is attractive, or whether the armadillo feels more secure walking into the trap with soil under foot rather than feeling the wire mesh.

Once trapped, it is not legal to move the armadillo to another location and release it unless you have landowner permission. However, transporting animals presents many problems such as disease transmission, displacement of existing wildlife and stress on the animal moved. Therefore, it is recommended that any trapped armadillo either should be humanely killed or else contact a professional nuisance wildlife control operator (https://www.wildlifedepartment.com/law/nwco-operators) to have them remove the animal. There will be a fee associated with this ser-vice. If you do decide to kill the armadillo, do it as humanly as possible. A shot to head or spine with a 22-caliber rimfire rifle is sufficient and is more discrete than other firearms. Drowning is not humane! Before shooting, make certain that there are no rocks or other hard objects under the armadillo—prevent a ricochet. Also wear eye protection to prevent debris from injuring your eyes. To reduce the potential of leprosy transmission, use gloves when handling the armadillo or the trap.

While armadillos can be caught fairly easily, after a few episodes of trapping and disposal of the animal you may decide the damage is tolerable. If so, consider cutting back on irrigation to lessen the likelihood of future damage.

Learn the best options to eradicate or suppress bermudagrass from a home garden plot.