9:00 a.m. Quail Habitat Management Field Day James Collins Wildlife Management Area The WMA is located 23 miles northeast of McAlester. We will meet at the headquarters. From the town of Featherston, turn south and follow the signs south for 3 miles to the area. (GPS: 35.043815, 95.474813)
VIEW ALL

These materials are intended to accompany three case studies programmed in the DeerCalc software. There are three scenarios: a small-size, a mid-size and a large farm. The program has three files for the small-size startup, one for each of the first three years of operation. There is one file each for the startup years of mid-size and large operations.

The following prices and materials are constant across the three scenarios.

Cost of water and feed troughs

In all scenarios, insurance and repairs are estimated to be around 2 percent to 2.5 percent of value per year.

The small-size operation consists of four pens of approximately 15,000 square feet and one pen of approximately 30,000 square feet. Pens are arranged in a block with a central alley. Four pens are 123 feet square. The fifth pen is 123 feet by 246 feet. The alley is 12 feet wide. Outside corners are cut at a 45 degree angle to mitigate deer behavior of congregating in corners. In between pens, a guillotine gate is installed. These gates allow deer to move between pens or, when closed, prohibit movement between pens. Entry gates into the main alley are 12 feet wide by 8 feet high. These gates are wide enough to block the alley and so aid with sorting and moving animals between pens. The exterior of the facility is surrounded with a two-wire electric fence to keep predators (mostly dogs) out of the pens. See Figure 1.

Labor for construction is assumed to be provided by the owner/operator. Pens are constructed over a three-year period to aid with cashflow and match space requirements. In year one, the three pens on the left side are constructed. In year two, the alley and the bottom right pen are built. In year three, the large pen is constructed. 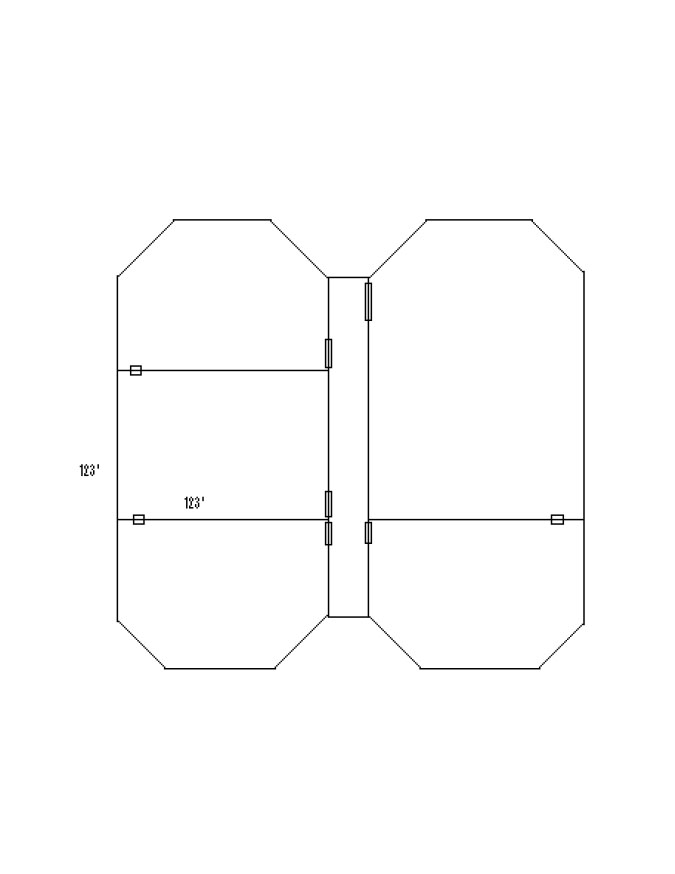 In addition to material costs, the grower will need to purchase a dart gun for administering medications and anesthetizing deer for veterinary care. Dart guns range from $300 to $3,000. A serviceable dart gun, powered with .22 caliber blanks, can be purchased for $700.

A standard ration for deer will include alfalfa and a high protein (20 percent), high fat (8 percent) pellet such as Purina 595 or other “sweet feed.” (This is not an endorsement of Purina products or any other company’s products.) Alfalfa price will vary annually with local supply and demand conditions. A bale of alfalfa will vary from $6 to $12 in Oklahoma. A high protein, high fat pelleted feed will cost around $440/ton.

Four adult deer will consume a bale (65 pounds to 75 pounds) of alfalfa in one week. The bale needs to be “flaked” as deer will typically only consume leaves. Fresh alfalfa ideally is fed daily with unconsumed stems removed from pens. Alfalfa that is exposed to moisture will spoil quickly and harbor pests, so it should be removed from pens and the area surrounding the pens.

Adult deer (bucks and does) will consume about 4.2 pounds per day of a sweet feed (20 percent protein, 8 percent fat) daily. Again, fresh feed should be offered daily. Refusals should be removed if exposed to moist conditions or unconsumed for more than two days. The amount fed can be reduced if substantial refusals are observed.

New-born fawns should be allowed nurse from their dams to consume colostrum. Within a few days of birth, doe fawns are typically segregated and bottle fed. Milk replacer will cost $36 to $45 for 25 pounds. It will typically cost around $100 for milk replacer per doe fawn. After two weeks, doe and buck fawns will consume a maximum of one pound of sweet feed. After weaning (around 12 weeks of age), both buck and doe fawns should be fed sweet feed (up to 4.2 pounds per day) and alfalfa.

All captive deer in Oklahoma should be vaccinated for Blue Tongue and Epizootic Hemorrhagic Disease (EHD). Vaccine currently costs $250 for 100 ml. A single dose is 2 ml to 3 ml (or cc) for mature deer. Two or three doses are administered annually for adult deer. The annual vaccination cost per breeding animal is $10 to $23 per head. Fawns will require an initial vaccine of 2 ml with a later booster. The cost for vaccinating a fawn is $10 per head. Consult with your veterinary for recommended dosage and number of booster vaccinations in your area.

About every three months, animals should be dewormed. Worming pellets cost $24 for 50 pounds. Four does will require 100 pounds per treatment. Note, lower cost methods of internal parasite control might be available. Oral dewormers might be administered in drinking water. Check with your veterinarian for advisability of this method. External and internal parasites can also be controlled with topical and/or injectable parasiticides. Fawns are wormed after four to five months of age.

Other veterinary expenses that should be budgeted include therapeutic treatment for pneumonia using injectable antibiotics. A single dose of penicillin will cost $1.20 to $1.60 for a 6 ml to 8 ml injection. Darts for use in a dart gun cost $16 for five darts. A herd of four does will require at least three packages annually. Miscellaneous veterinary supplies, including needles and syringes, are budgeted at $8 per head. If TB/Brucellosis testing is required, an addition $50 per head should be budgeted.

The “start-up” scenario assumes that the grower purchases four bred (natural service or artificially inseminated) does. Bred does of unproven or low-quality genetics will cost around $1,500 per doe. Note, high genetic quality does will cost more than $5,000 per head and can be cost in excess of $10,000 per doe. By purchasing bred does, the grower will not need a breeder buck in the first year.

In the second year, the grower will need either a breeder buck or to artificially inseminate (AI). Note, even if artificially inseminating, a breeder buck is usually used to get 100 percent (or close) conception rates. A 1.5-year-old breeder buck of lower quality can be purchased for $1,500 to  $2,000. Artificial insemination is costly, but may be necessary if the breeder decides to improve herd genetics. Very good quality semen is currently available for $300 per straw. (One straw can be used to breed two does). However, the veterinary costs are high. The drugs for anesthetizing and breeding currently cost about $310 per head. A veterinarian will charge around $250 per doe for artificially inseminating. The total cost to AI is about $710 per doe, making the purchase of a breeder buck desirable for most small producers.

The quantity of death loss in captive deer populations is highly variable. Outbreaks of EHD and Blue Tongue can claim more than 50 percent of herd in a few days. In some areas of Oklahoma, losses to EHD and Blue Tongue are rare but, in other areas, outbreaks occur annually. For budgeting purposes, a minimum loss of 10 percent should be considered for all age classes.

Producers will generally not sell deer until their third year of operation. However, there are markets for younger deer. Lower quality or unproven quality genetics can produce weaned doe fawns with a market value of $500 and wean buck fawns with a market value of $750. At 1.5 to 2.5 years of age, an open doe might bring $750 and a bred doe $1,250. A yearling buck can bring $1,000 or more depending on antler size. At 2.5 years of age, a buck might bring $1,500 or more.

The mid-size operation is shaped similar to Figure 1, except that there are six pens of equal size. Each pen is approximately 30,000 square feet (173 feet by 173 feet). The 12-foot central ally is maintained in this scenario. As in the small-size scenario, labor for construction is assumed to be provided by the owner/operator. Construction is completed in a single year, but could be spread over three years if necessary for cash flow considerations.

Most veterinary expenses are the same per head as in the small-size scenario. However, does will be artificially inseminated and “clean-up” bucks used. AI procedures are expensive, as discussed above, $710 per doe for semen, drugs and veterinary services is budgeted.

As above, a minimum loss of 10 percent should be considered for all age classes.

Semen might be sold. For budgeting purposes, 50 straws are sold at $300 per straw.

The large-size operation will usually be a “turn-key” operation, with the owner/operator providing little or no labor. The layout of pens and working facilities will differ from the two previous scenarios because of the increased size and number of pens. Additionally, the large-size producer will have a working facility with sorting/holding pens, an enclosed alley and drop-floor chute. No material requirements are provided for a large-sized operation. A quote was obtained from an experienced, local contractor. For a turn-key operation with 20 pens of 40,000 square feet, alleys, an 80-foot by 120-foot pole barn, sorting/holding pens and chute, a price of $300,000 was estimated.

Feed costs are the same per head as in the mid-size scenario.

Veterinary expenses are the same per head as in the mid-size scenario, except that semen prices will be higher. Semen costs can be as much as $15,000 for the highest quality bucks.

As above, a minimum loss of 10 percent should be considered for all age classes.

No animal sales before three years of age will typically take place from a large-size operation. After three years, 2.5 year old bucks will start at $10,000. Semen will typically be sold. Given the genetic potential of the operation’s breeder bucks, prices for semen can be as range from $300 to $1,500 per straw, and even higher, depending on antler size.

Learn how to utilize the farm financial trends worksheet to gain insight into your farms financials performance and changes in financial position.

Learn about evaluating financial performance and position by using criteria such as liquidity, solvency, profitability, and financial efficiency.