Straw Bale Bed: A Way to Garden While Building Soil

What is a Straw Bale Bed?

A straw or hay bale bed is a type of bed that can be used for raising vegetables (pepper, tomatoes, onion, grain amaranth, etc.), flowers, herbs, and cover crops (cow peas, vetch, etc.) directly on or in bale(s) , with the possible addition of growing media (plant nutrients) from compost, soil or other sources (Figure 1).  Generally, the growing season and planting time for bale gardens is roughly the same as that for conventional beds.

Straw or hay bales from alfalfa, wheat, oats, rye or other cereals are suitable for making such a bed. Straw bales are preferable over hay since straw contain less seed than hay. The straw or hay bale should be tight and held together with two to three strands of twine, preferably made from a biodegradable material such as sisal, but synthetic materials can also be used. Biodegradable twines should be positioned parallel to the ground to avoid their hastened decomposition.

More importantly, straw bale beds offer the opportunity to grow quality produce that is relatively dirt and insect free (Figure 2). For example, vine plants have superior quality produce because they stay on the straw escaping ground pests and soil contact. Bale beds also allow earlier planting in the spring and extended production into the fall and winter months because the straw tends to insulate the plants, and as it decomposes, provides heat to keep plants warm. 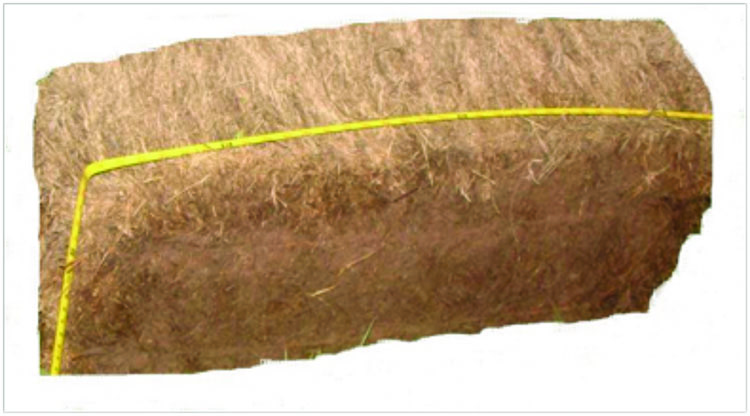 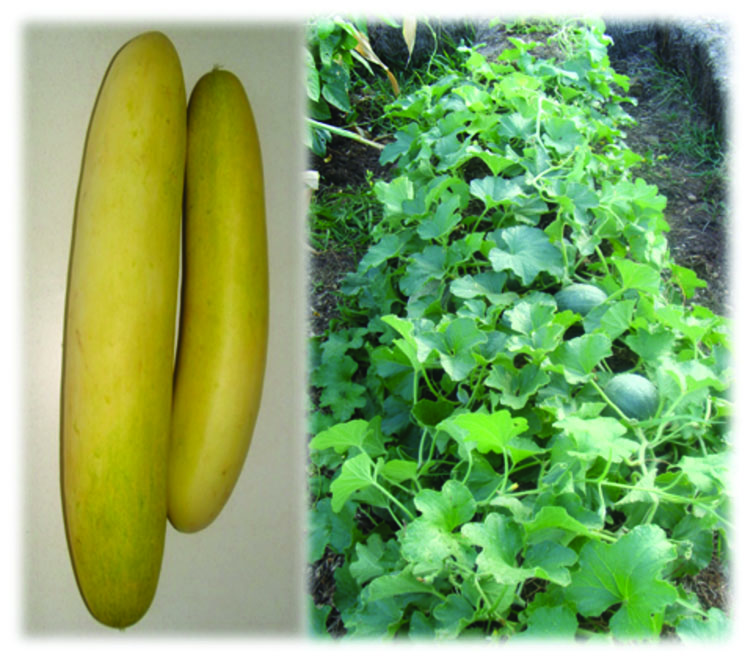 Figure 2. Quality produce (cucumber-left and cantaloupe-right) grown on straw bales in Stillwater, OK without use of any pesticide.

Straw or hay bales can be obtained from several different places. They can be purchased from local stores or obtained directly from a hay producer, or any farmer baling straw. Straw bale house builders may sell unused bales. If purchased, prices range anywhere from $2 to $5 per bale in Oklahoma. Depending on the grower’s needs, either old or new bales might be purchased. Old and intact straw bales can be used right away and are generally cheaper than new bales. Purchasing old unused straw bales from farmers or house builders may help them recover part of their investment on these bales.

Bales can be arranged based on space, type of production, and mobility needs. The grower can also design the placement of the bales for an attractive appearance.  In any case, ease of maintenance should be considered when designing the garden.  Planting height, row width, sun exposure, and watering convenience are important.

Fresh straw bales must be watered and allowed to decompose for at least one to two weeks before planting. This is important because if seed or seedlings are planted into a fresh bale, the microbes in the bale will use any nutrients present to breakdown (or decompose) the straw depriving the growing seedlings of nutrients such as nitrogen, phosphorus and other essential elements. Decomposition is an exothermic process, this means that substantial heat is released as the fresh straw is broken down.  This can further damage seed or seedlings placed directly into a fresh bale.  Thus, old or pre-seasoned bales are very desirable for bale gardening.

There is a method of speeding up this seasoning of new bales in situations where a gardener may need to hasten their planting.  Applying a nitrogen rich fertilizer to the bales, then watering it in thoroughly will help to accelerate this decomposition process.  This can be repeated at regular intervals until a substantial temperature change (or spike) is no longer detected several inches deep in the bale.  Generally, a bale is ready to be planted when the temperature remains fairly constant at a depth of about 3 to 4 inches.

There are two ways to plant the ‘bed.’ One way is to make pockets or holes about 3 to 4 inches deep by gently loosening and carefully removing a small amount of the straw (Figure 3 a). The number of pockets can vary depending on what the grower plans to grow. Generally, it takes about 10 to 15 minutes to make four pockets or holes on a straw bale. The other method is adding or spreading soil materials on the top of each bale (Figure 3 b) also called a flat straw/hay bale bed. For both methods, the growing medium can be a compost or manure mixed with blood meal and other nutrient rich materials. Approximately 1 pound of compost is needed to fill each pocket. For the flat bed method, a 2- to 3-inch deep layer of compost works well. Once the growing media is in place, the bales need to be moistened. It is important to induce a good rooting environment for successful production on bale beds. 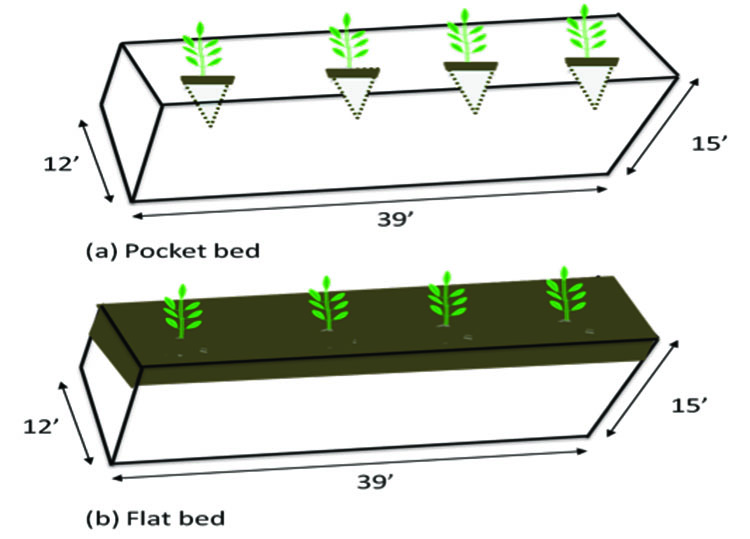 For both the pocket and flat methods, seedlings can be transplanted to the bales or seeds can be planted directly into bales. Direct seeding when possible is the preferred practice because it allows germinating seeds to form extensive roots within the growing profile. The number of plants per bale depends on the space requirement of the specific species and varieties of crops, as well as productivity. For example, two cucumber, cantaloupe or zucchini plants can be established on a straw bale and about four to six cowpeas, three to five peppers or tomatoes, etc.

Watering is perhaps the most crucial consideration in bale gardening. This is due to the fact that the water infiltration rate is high in straw bales. There are several ways to handle this issue. An effective, less labor intensive, watering system can be achieved with the set up of timed drip irrigation or a soaker hose system. Low-input resources can be used innovatively to build an alternative passive watering system. For example, a 2-liter soda bottle or a gallon milk container can be used for watering. The soda/milk bottle can be pierced in two to four places to allow water to drip. Then the container can be filled with water and placed about 1 inch away from the target plant. This can last for a couple of days, depending on the size of the pierced holes. Liquid organic nutrients as well as compost tea can be added to this water, serving a dual purpose; just like a large scale fertigation system.

The nutrient supply for plants established in straw bales is also critical. Growers must ensure that an adequate supply of the major nutrients (nitrogen, phosphorus and potassium) is available to the plants. This helps offset the demands of the microbes as they break down the straw or hay (immobilization) as well as replacing nutrients lost through irrigation (watering). Nitrogen deficiency is very common. If crops show yellowing of old leaves before their physiological aging, it is an indication of nitrogen deficiency. Purpling is a symptom of phosphorus deficiency. Leaf margin necrosis is a symptom of potassium deficiency. Generally, if any of the 16 essential plant nutrients are in short supply, growth and final yields will be affected.

Straw bale beds can be enriched with the application of soil, manure, compost, or a mixture of these. There are also several organic fertilizers available on the market. After establishment of the garden crops, compost tea, blood meal and fish meal can be added, depending on the fertility requirement of these bale grown crops. If rain is abundant, some nutrients such as nitrogen and sulfur might be supplied through deposition. Foliar application of macro and micronutrients is also a good way to ensure balanced nutrition in bale gardening.

The greatest benefit of the straw bale garden is the fact that no major weed control is needed. Weed problems will seldom be encountered, thus negating the need to use chemicals for control. It is possible to see some volunteer plant emergence, but these are generally less competitive and easy to remove mechanically or manually. If raw manure is used as the added medium for growth, it is likely more weeds are seen than if properly cured compost is used. Since the grower visits the raised garden frequently, it only requires a matter of minutes to pull out any weed seedlings quite easily.

Insect control in a straw bale garden is also much easier than in an equivalent conventional situation. Because the bale elevates the plants above the ground level, there is little to no problem with ground dwelling pests. As the bales are used in only one growing season, there are no residual populations from previous crops present in the system. There should not be any pests introduced from the growing medium if it is properly composted or obtained cleanly from a dealer. The pests present in a straw bale garden will tend to be of the winged variety. These are controlled normally through sprays, baits, or other appropriate methods.

The Longevity of the Straw Bale in a Garden

Generally, it is recommended to replace straw bales at the end of the growing season. Bales used for gardening do not last very long due to the necessary frequent watering and high microbial/root activities which occur in them. The high temperatures in Oklahoma further hasten this decomposition; thus bales will not support two production seasons. At the completion of the growing season or before the start of the next, used bales can be incorporated into the ground for conditioning the soil or possibly used in the rows between the bales as mulch for grass and weed control. The old straw can also be added to compost piles for quick and complete decomposition. Given the nutrients needed for vegetable production, this method can help in reducing costs associated with fertilization.