Emerald ash borer, Agrilus planipennis, is a non-native metallic woodboring beetle accidentally introduced to the U.S. from Asia. This invasive species attacks only ash trees, Fraxinus spp., and is responsible for the destruction of tens of millions of native North American ash trees. The beetle has been spreading rapidly due to movement of firewood and other infested materials. Emerald ash borer has been discovered as close as south central Missouri and is expected to invade Oklahoma. A key to effective management is early detection, which is enhanced via correct identification of signs of the insect and its damage symptoms. 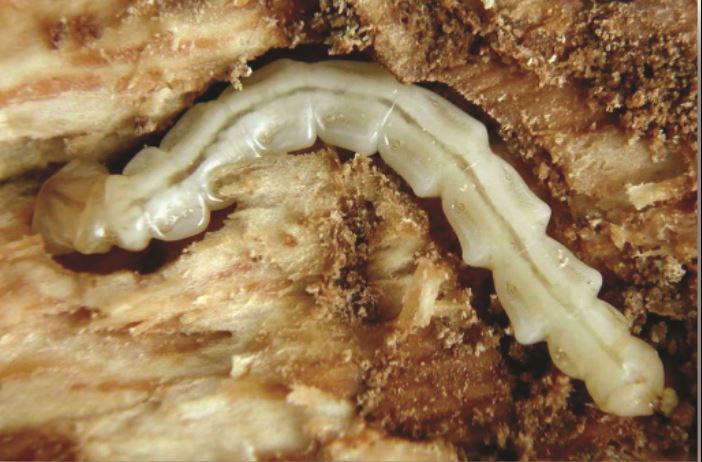 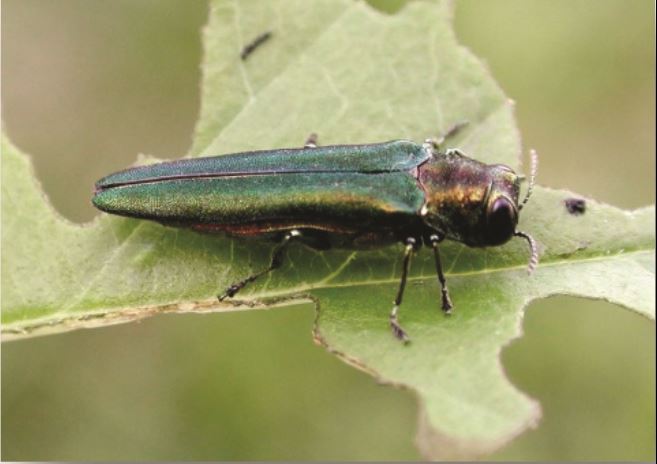 Susceptible ash species include white, green, blue, and black ash. Infested trees begin to show symptoms of stress within a few years of initial attack. Early damage appears as dieback, starting in the upper canopy and advancing throughout the tree over several years. 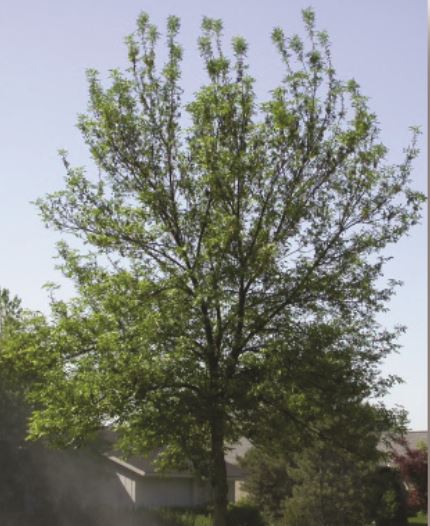 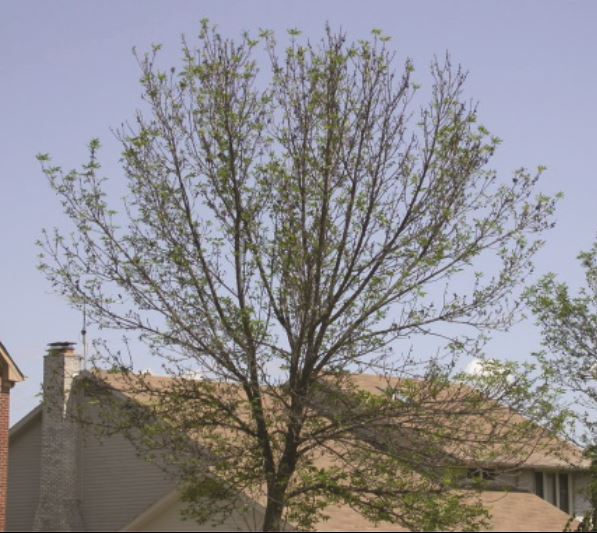 Infested trees become girdled as the flow of food and water is cut off by larval feeding. Secondary shoots sprout through bark of the trunk and limbs as the tree attempts to outgrow the damage. Secondary (epicormic) growth can also appear as aerial shoots that bolt through the soil from roots. 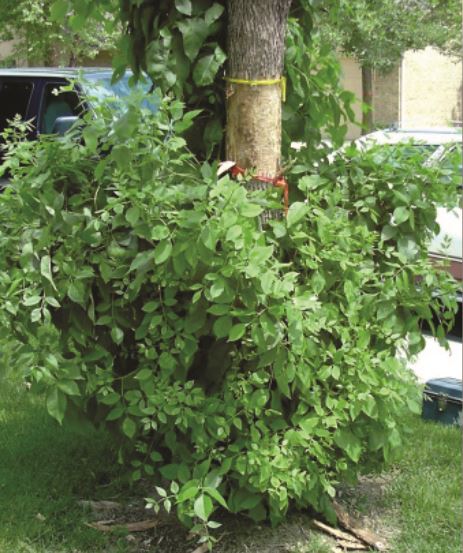 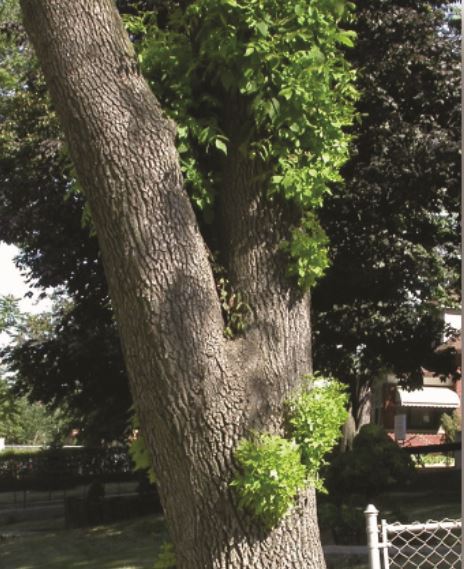 Larval feeding galleries become targeted by tree defenses, some of which attempt to wall off damaged tissues with a layer of corky tissue. This thicker layer pushes on the outer bark and causes visible splits along the trunk. 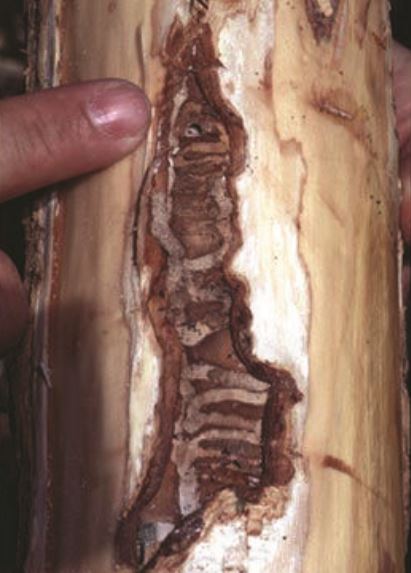 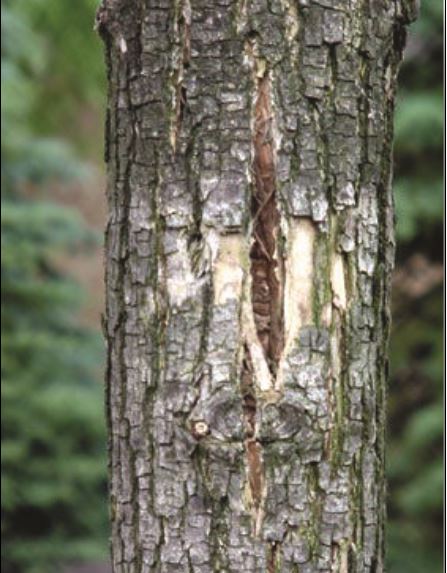 Larvae feed on the vascular tissues of the tree, starving the tree of nutrients and water by girdling it. Non-symptomatic trees can harbor larvae for several years before any outward symptoms of stress appear. Adults form distinctly D-shaped exit holes. 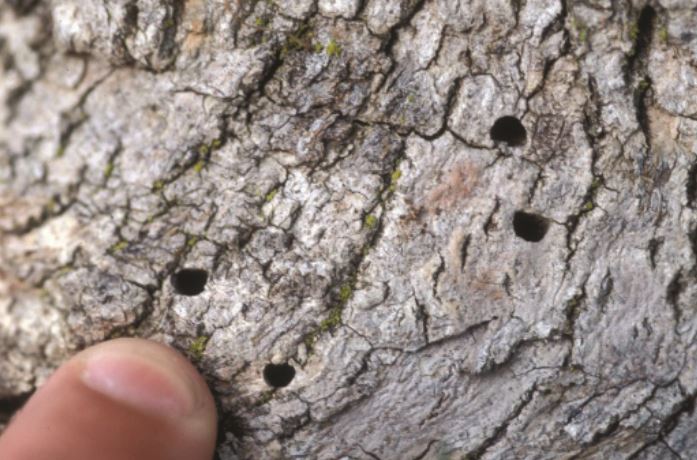 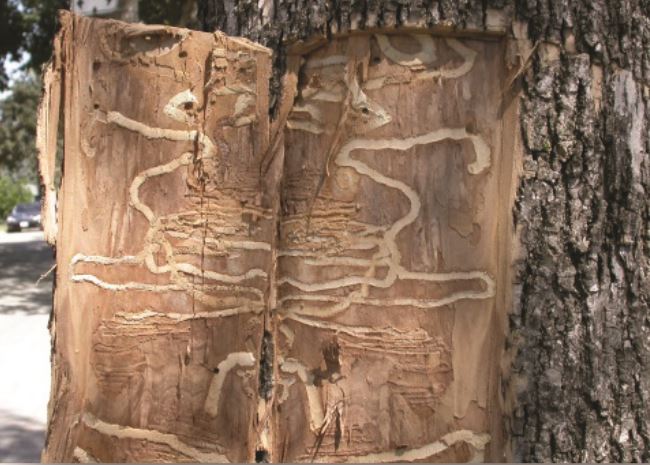 Woodpecker attacks can become severe as these predators hunt for larvae and pupae beneath the bark. The outer bark tends to flake off as the birds forage for food, causing a “blonding” effect on the trunk and limbs. While woodpeckers are efficient, they cannot control the pest. 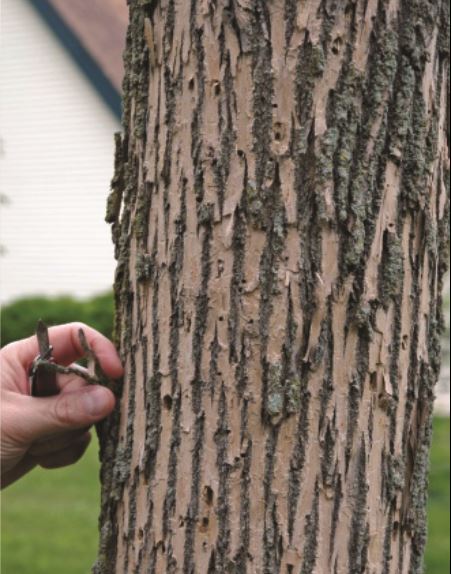 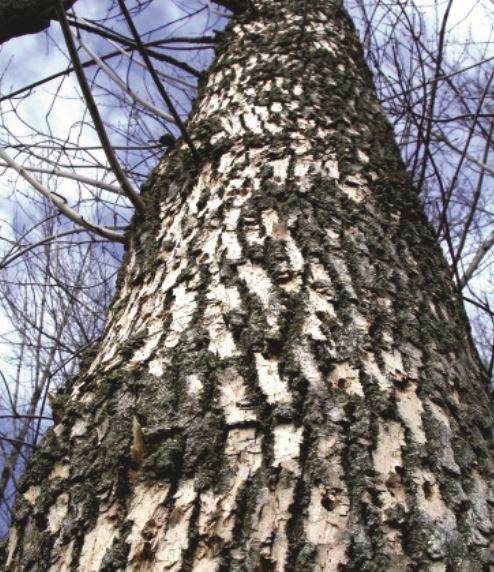 If you encounter any of these signs or symptoms of emerald ash borer in your area, please contact USDA Animal and Plant Health Inspection Service (APHIS) at (405)609-8840 and Oklahoma Department of Agriculture, Food, and Forestry (ODAFF) at (405)522-5971. For more information about emerald ash borer, please visit the national Emerald Ash Borer website at www.emeraldashborer.info and the Don’t Move Firewood campaign website at www.dontmovefirewood.org.

Oklahoma State University, in compliance with Title VI and VII of the Civil Rights Act of 1964, Executive Order 11246 as amended, Title IX of the Education Amendments of 1972, Americans with Disabilities Act of 1990, and other federal laws and regulations, does not discriminate on the basis of race, color, national origin, gender, age, religion, disability, or status as a veteran in any of its policies, practices or procedures. This includes but is not limited to admissions, employment, financial aid, and educational services.Issued in furtherance of Cooperative Extension work, acts of May 8 and June 30, 1914, in cooperation with the U.S. Department of Agriculture, Director of Oklahoma Cooperative Extension Service, Oklahoma State University, Stillwater, Oklahoma. This publication is printed and issued by Oklahoma State University as authorized by the Vice President, Dean, and Director of the Division of Agricultural Sciences and Natural Resources and has been prepared and distributed at a cost of 42 cents per copy. 0314 GH.