This fact sheet focuses on the types, number and geographical distribution of septic systems installed in the state since 2002. Aside from being a source of information about recent septic systems trends in Oklahoma, this fact sheet may be used as a reference to formulate business decisions by stakeholders in the septic systems industry (e.g., installers, haulers and pumpers, suppliers and manufacturers). Policy makers may also use this information when considering adjustments in septic systems-related regulations and training programs. 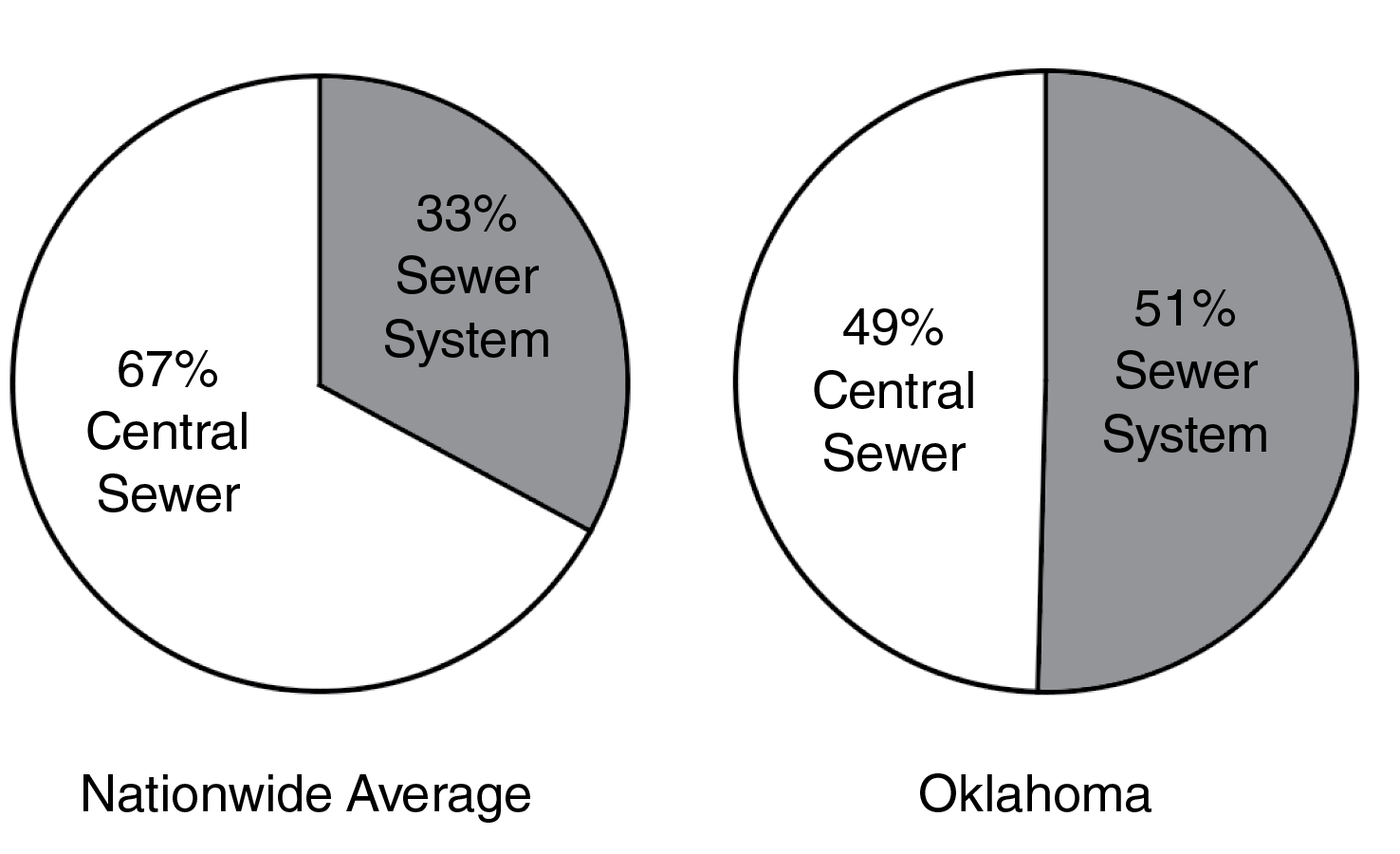 The Septic System Industry and the Home-building Industry

The septic systems industry is closely tied to the home-building industry. As many as 9,000 systems were installed in Oklahoma during the height of the housing market in 2005, but decreased to only 4,600 units when the market was down in 2012 (Figure 2). The number of units installed in the state has increased to an average of 5,600 since 2014, due in part to the improvement of the housing market. Factors that impact the home-building industry such as mortgage interest rates, cost of home-building materials and the demand for newly built houses will continue to affect the septic systems industry.

Figure 2. Trends in total and single housing units built in Oklahoma along with the number of septic systems installed annually from 2002 to 2017. (Data sources: US Census Bureau and Oklahoma DEQ)

Until 2012, conventional system (also known as pipe-and-gravel or gravity-fed system) was the most common system in Oklahoma (Figure 3). Conventional system does not need electricity to function because flow of the wastewater through various components is driven by gravity. This system requires the least maintenance, but requires good soil and a relatively large area for installation. It typically works well for a 20 to 30 years when used and maintained properly.

Figure 3. Trends in relative percentage of various types of septic systems installed in Oklahoma from 2002 to 2017. (Data source: Oklahoma DEQ)

The aerobic treatment system/unit (ATU) has become the most popular system in the state since 2013 (Figure 3). ATUs may be installed in less-than-ideal soils (shallow, very fine or very course soils) and require relatively smaller land areas; however, they use electricity and have the most intensive maintenance requirements among the systems installed in Oklahoma. Current trends show a shift from a system with the least intensive maintenance to a system that requires frequent maintenance and uses electricity.

Figure 4. Dominant type of septic system in each county in Oklahoma during 2015 to 2017.

Variation is Septic Systems across Oklahoma

Properties of the soil, such as texture (coarseness or fineness of soil) and the depth to a flow-restricting layer largely determines whether a certain type of septic system will be permitted for installation. Because soil texture and thickness varies across the state, the types of septic systems vary. In Payne County for example, areas in Perkins with medium-textured soils are generally permitted for conventional system installation, but just a few miles northwest in Stillwater, ATUs are widely required due to the predominance of clayey areas. For more details about the influence of soil properties on septic system decisions, refer to Fact Sheet PSS-2271, Soil-based Septic System Decisions in Oklahoma.

Rainfall rate and frequency and evapotranspiration (ET) rates also drastically vary across the state, which affects the distribution of septic systems. For example, there are very few evapotranspiration/absorption (ET/A) and lagoon systems at the southeastern and eastern edges of the state (see Figure 5). This is because low ET and high rainfall rates in these areas do not favor the optimum functioning of these two systems.

Being located in an Oklahoma DEQ-designated Water Body Protection Areas (WBPA) also affects the type of system permitted. Regardless of soil and climate conditions, areas in the WBPA, specifically those within 660 feet from a listed water body or scenic river corridor, require ATUs with a nitrate-reduction component.

Figure 5. County averages of the number of septic systems installed in Oklahoma from 2015 to 2017. (Data source: Oklahoma DEQ)

Population density obviously influences where septic systems are installed. The Tulsa and Oklahoma City metropolitan areas have substantially higher population densities compared to the rest of the state. As expected, these areas have the greatest concentration of septic systems (Figure 5). This is particularly true for the ATUs and conventional systems – the two most common systems in Oklahoma. For details about recent numbers of the various types of septic systems installed in each county go to: http://spotlight.okstate.edu/osu-septic.

Since 2014, there has been an uptick in septic system installation compared to the recent record lows in 2012 and 2013. This could indicate a positive outlook for the short-term future of the septic systems industry.

A recent shift from conventional systems to aerobic treatment systems as the most-widely used septic system in the state means that now Oklahomans most frequently use a high-maintenance system with the most components that could malfunction. In light of this drastic change, it is prudent to revisit regulations that govern the maintenance requirements for ATUs and septic systems, in general.

At: https://www.census.gov/construction/bps/stateannual.html. Accessed in June 2018.

YESNO
Fact Sheet
Septic Systems – What to do after Severe Weather

The different types of septic systems, how they work and the proper way to maintain them including where to go for help.