Scorpions are not classified as insects but as arachnids. This makes them close relatives of ticks, mites, and spiders. There are approximately 50 species of scorpions that occur in the continental United States, but most of these are found in the Southwest. The exact number of species in Oklahoma has been estimated at between three and five, but only one species is common to the entire state.

Around the world, scorpions range in size from one half inch to over seven inches long, depending on the species. The most common species found in Oklahoma is about two inches long. All scorpions have eight legs, two large pincers (pedipalps), and a segmented tail. This long, slender tail is usually arched over the back of the abdomen and contains a bulb-like venom gland and a stinger (Figure 1). Scorpions have small eyes and very poor vision. They are predatory arthropods that detect their prey primarily by acute senses of touch and sound. 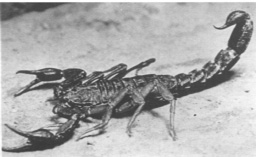 Scorpions are dry-land creatures and are not normally found in extremely damp areas. However, they do require some moisture and are often attracted to the damp areas around plumbing, condensers, and the evaporators of air conditioning units.

Scorpions usually hide during the day and become active at night when they feed and mate. Most species hide under stones, logs, boards, rubbish, and the loose bark of fallen trees and posts. When scorpions enter buildings, it is often because their outdoor habitat has been disrupted in some way. Houses in new developments may experience an influx of scorpions because construction work has destroyed their natural habitats. Scorpions may also enter older buildings in search of prey or shelter. Late spring and early summer rains often cause scorpions to seek dryer habitats. Cracks and crevices around the outside of a structure can allow scorpions easy access into buildings.

Scorpions do not usually enter houses in the winter because cold weather makes them sluggish. Those found inside the house during winter are probably summer visitors that never left.

Inside the home, scorpions are most often found in crawl spaces, wall voids, and attics, but they are also attracted to kitchens, bathrooms, and other areas where water is available. As summer temperatures rise, scorpions move out of the hotter areas of the home and into the cooler living areas. It is during this time that most scorpion stings occur inside the home.

Scorpions feed on insects, spiders, centipedes, and other scorpions. Since they have poor eyesight, they do not stalk or chase their prey but lie in wait for it. They use their pincers to grab the prey, crush it, and draw it to their mouth. The scorpion then ingests the body juices of the prey. To make feeding easier, scorpions will sting larger creatures to immobilize or stun them. Scorpions have been reported to survive for almost two years without food and water. This survival time depends upon the species and its developmental stage.

Scorpions mate in the fall or early spring. After an elaborate courtship process, lasting anywhere from 24 to 36 hours, it can take from five months to over a year for the eggs to mature within the female. Females do not lay eggs; the young are born alive in semi-transparent sacs. A female can produce anywhere from 14 to 100 young in one litter. Once the young scorpions free themselves from their egg sacs, they climb onto the back of the mother and remain there until after their first molt several days later. Young scorpions are nourished by a yolk material stored in their bodies and, contrary to hearsay, do not eat the body of the mother.

After their first molt, young scorpions leave their mother and begin to fend for themselves. At this time, the young scorpions are already capable of stinging. It takes about one year for the young to reach maturity. Depending on the species and the environmental conditions, scorpions can live for three to five years.

Scorpions are basically shy creatures, aggressive only towards their prey. They will not sting humans unless they are handled, stepped on, or otherwise bothered. For most people, a scorpion sting is slightly more painful than a bee or wasp sting. The venom can produce considerable pain around the area of the sting, but swelling is generally limited. In some people, sensations of numbness and tingling may develop in the area of the sting for four to six hours. After this time, the symptoms start to regress and will normally disappear within 24 hours.

A scorpion sting can be treated at home without having to go to a hospital or physician. However, in the case of young children or hypersensitive individuals, medical attention should be sought immediately. The sting of the species of scorpion we have in Oklahoma is not considered to be lethal and rarely causes few problems. If traveling, however, remember that there are other species of scorpions that can be more venomous, especially to the young or elderly. The majority of the more venomous stings can be treated with an antivenom. When administered early, this serum has saved lives.

Treat a scorpion sting by washing the area with soap and water and applying a cool compress. If the pain is uncomfortable, an over-the-counter pain reliever such as aspirin or acetaminophen may be helpful, but you should consult your physician first. Elevating an affected limb may also provide some relief. Do not administer any sedatives, such as alcohol. If swelling or pain persists, or if breathing difficulty occurs, seek medical attention immediately. Do not take any chances, especially with small children or the elderly.

After following these precautions, you may notice an increase in scorpion activity in or around your home. This is because their habitat has been removed and they are looking for a new place to live. You should then consider treating your home with chemicals. If scorpions are extremely common in or around your home, it is suggested that you use a pest control company to treat the premises. A pest control company will have the equipment, chemicals, and know-how to treat the area properly.

When chemical control is needed, properly labeled insecticides should be applied to baseboards, under furniture, and all interior and exterior cracks and crevices (pesticides for homeowner use are provided in Fact Sheet EPP-7312). Other areas that will likely need treatment include the attic, garage, and crawl space. Areas that are in contact with the soil should also be treated (foundation, siding, porches, etc.). Treatment must be thorough. It is preferable to use dust formulations of insecticides in attics, wall voids and crawl spaces. After completing your clean up and sealing efforts, outdoor insecticide treatments should help eliminate scorpions before they gain access into the home.

Information intended for home growers regarding concerns about pesticide residues, drift, toxicity and their application methods.