Symptoms of Sclerotinia stem rot of canola generally appear after flowering in the spring. Affected plants ripen prematurely or wither and die before seed is produced (Figure 1). Elongated white lesions are normally found at the base of the plant (Figure 2) or in the middle parts of the stem, where leaves attach to the stem. Stem lesions are initially soft and water-soaked, then become dry and bleached-white in color. With wet and humid conditions in the plant canopy, a white and cottony growth of the fungus may be visible on and around infected stems. Affected plants may remain upright or may lodge when killed during or after pod fill stages of crop development. Upright dead plants are easily observed in a field with severe disease. Sclerotia, the seed-like survival structures of the pathogens, develop in, and sometime on the surface of affected stems during the late stages of disease development. The presence of sclerotia is a definitive characteristic in identifying Sclerotinia diseases. Sclerotia are black, irregularly shaped and hard. Sclerotia of S. sclerotiorum are highly variable in size and shape ranging from 2 to 30 mm (Figure 3). Sclerotia of S. minor are more numerous and smaller in size ranging from 2 to 5 mm (Figure 4). During extended periods of cool, wet weather in late winter and early spring, sclerotia germinate to form tiny cup mushrooms about ¼ inch wide and shaped like a golf tee. 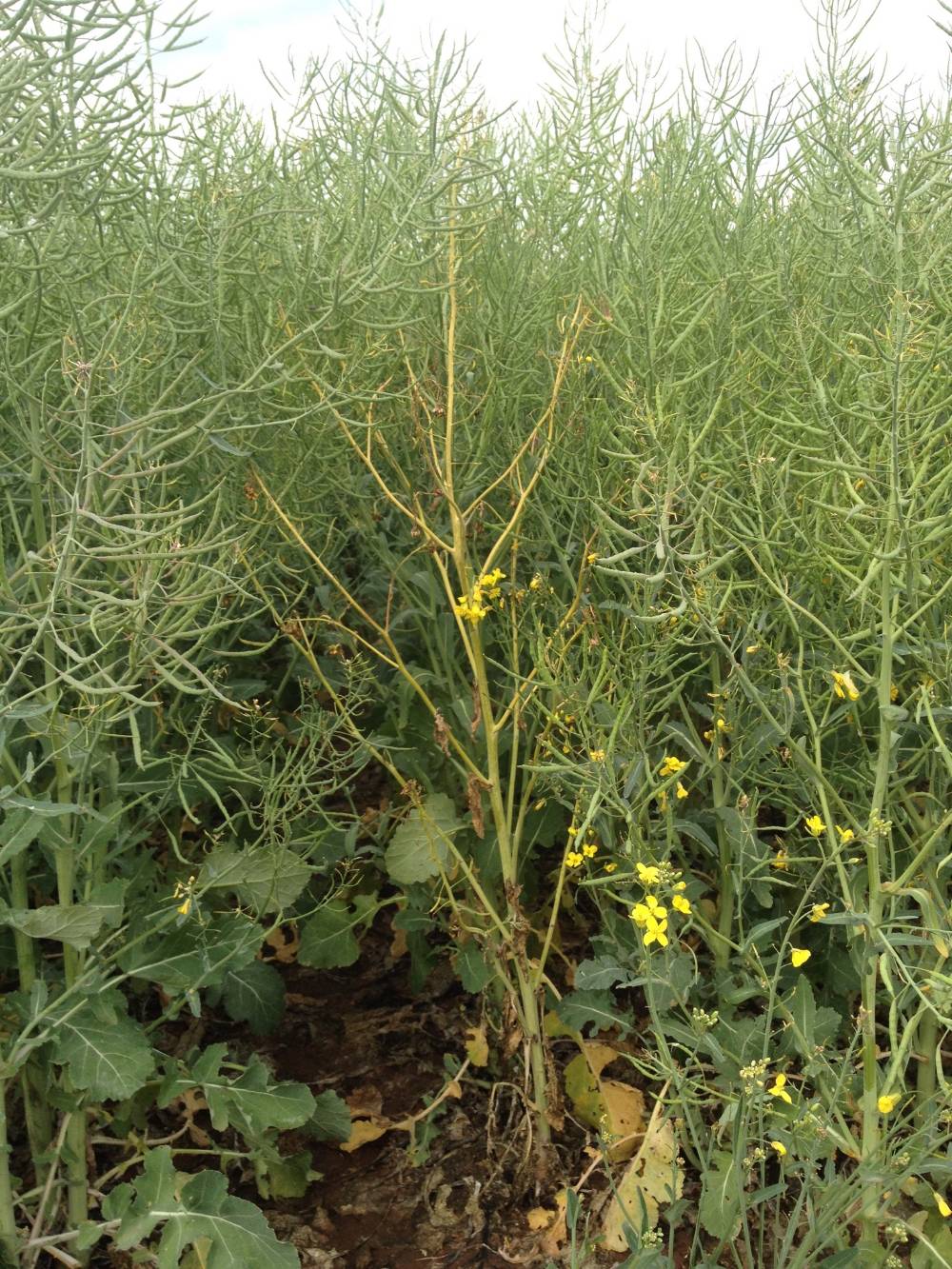 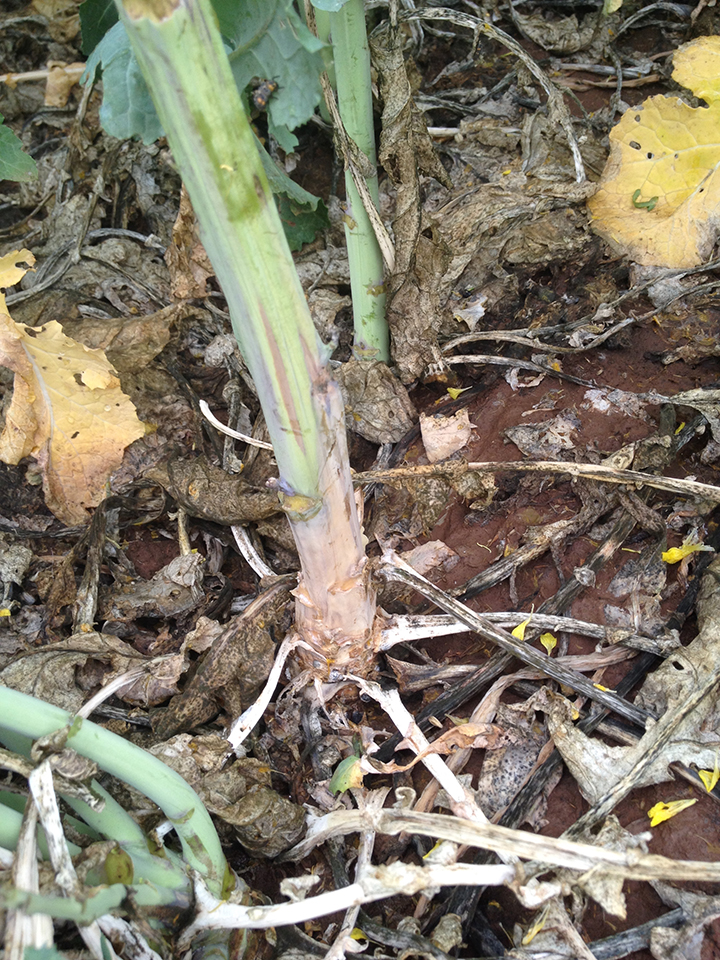 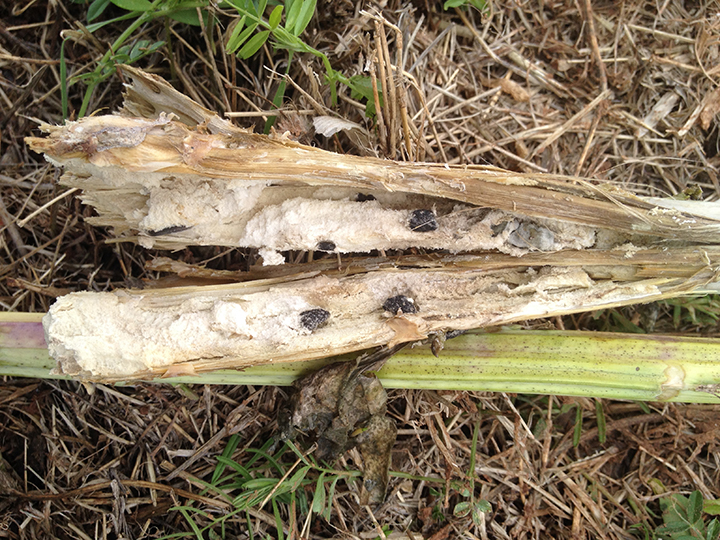 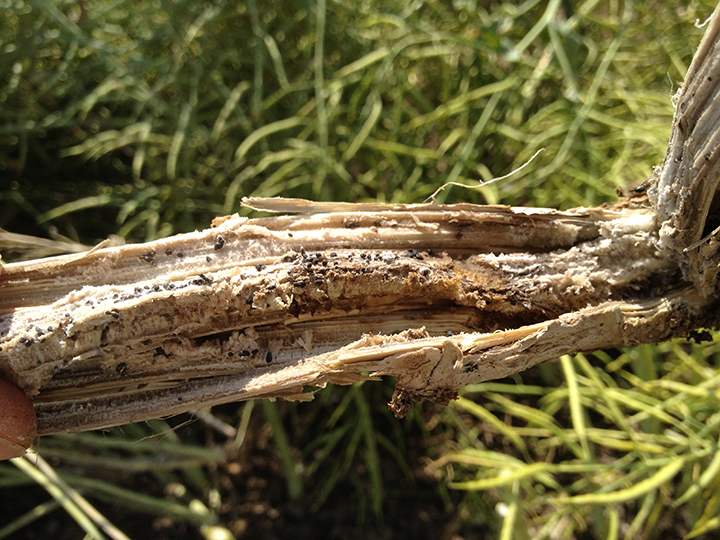 Sclerotia that are produced on previous crops and survive in the soil for extended periods (up to 10 years) serve as the source of disease outbreaks. Sclerotia near the soil surface can germinate directly to produce tufts of fungal strands that can infect nearby stems and leaves in contact with the soil or germinate to form a tiny cup-shaped mushroom that produces airborne spores called ascospores. Ascospores germinate and colonize flower petals during bloom stages, which then fall from the upper plant and lodge on lower plant parts where they cause infection. Spores can germinate and directly penetrate living floral petals, but old canola petals that die after flowering provide a better nutrition source for the fungus. The fungus can then invade healthy plant parts and grow between the cells, moving into the leaf petioles, branches and eventually into the stem. As nutrients become limited when the plant begins to die, sclerotia are produced mostly in the cavity of decayed stems. Sclerotia are released to the soil during harvest, tillage and natural stubble decay, where they can initiate another disease cycle.

Environmental conditions are important in the regulation of Sclerotinia stem rot infection and development. Because there is only one disease cycle per year, the weather prior to and during canola flowering is particularly important for disease establishment, and several conditions must occur simultaneously for disease to develop. Rainfall levels of 1 to 2 inches during a 1- to 2-week period before flowering provides sufficient soil moisture for germination of sclerotia and spore production. Extended wetness in the plant canopy favors disease development from spores settling on petals. Low humidity and rainfall before flowering decreases the risk of infection, and dry conditions during petal infection can limit disease progress. Temperature influences disease severity to a lesser extent than moisture. Temperatures in the range of 55 to 80 F favor infection and disease development. However, if temperatures exceed 85 F or are below 50 F, disease development is inhibited even with adequate moisture. Additionally, cultural practices, such as high plant densities and high levels of soil fertility may promote disease development by creating a dense plant canopy that retains soil moisture and high humidity levels.

Sclerotinia stem rot of winter canola has not yet reached severe levels in Oklahoma, therefore management practices should focus on limiting the build-up of the fungus in fields. Because resistant varieties are not available, fungicide application is the primary management strategy in canola production areas where Sclerotinia stem rot is a severe problem.

Crop rotation is effective in limiting the buildup of sclerotia in fields. However, its effectiveness is limited where levels of sclerotia are high because the fungus can survive for up to 10 years in the soil. Many broadleaf crops and weeds are susceptible to S. sclerotiorum and S. minor. In general, grass crops and cotton are not susceptible to Sclerotinia stem rot. Therefore, wheat and other small grains, corn and grain sorghum are good rotational crops for cropping systems with winter canola. Because winter canola has increased in popularity as a rotational crop for wheat to control grassy weeds, wheat it is an ideal crop to delay the build-up of Sclerotinia stem rot. Crop rotations with soybeans and peanuts should be avoided. Additionally, good control of broadleaf weeds is important in cropping systems involving winter canola. Ideally, canola should be planted after at least two years of planting non-susceptible crops. Although some sclerotia will persist in infested fields, an effective crop rotation program will slow the buildup.

Effective cultural practices may help reduce levels of Sclerotinia stem rot and help prevent its build-up where the disease is not serious. Canola should be managed using recommended seeding and nitrogen fertility rates so that an overly dense canola canopy does not result, which would provide ideal conditions for disease development. Soil and crop debris should be washed from swathers and combines used in infested fields or in unknown areas to prevent the introduction of Sclerotinia and other soilborne pathogens into clean fields.

Where the disease is severe, fungicide application during flowering is the primary management strategy for Sclerotinia stem rot. There are several fungicides registered for use on canola that are effective against Sclerotinia diseases. Applications are generally made at early bloom and again two to three weeks later, if needed. Fungicides work to prevent flower petal infection by airborne spores of the fungus. Their effectiveness against direct infection by germinating sclertoia in the soil is unknown. Fungicide application in the spring may also help with other diseases such as Alternaria black spot and powdery mildew, but not black leg, which requires application in the fall during rosette stages of crop development. Fungicide application for Sclerotinia stem rot is a significant expense and is only recommended where the disease has a history of reducing yield. Consult the latest edition of the OSU Extension Agents Handbook of Insect, Plant Disease and Weed Control (Circular E-832) for more information on fungicides registered for use on winter canola.

The fungus Coniothyrium minitans parasitizes and kills sclerotia of Sclerotina in the soil. Coniothyrium minitans is commercially available as Contans WG® fungicide, which is sprayed on the soil prior to planting or onto crop debris at the end of the season. Contans WG® has been effective in vegetable crops, such as lettuce, but has generally been too expensive for field crop use.