Potato is a cool-season crop and is grown through the spring months and harvested in early summer in Oklahoma. Fall potato production usually results in poor plant stands and low production due to high soil temperatures at planting and during early crop development. Potatoes grow best in fertile, well-drained, sandy loam soils. Planting on poorly drained soils usually results in a poor plant stand due to seed piece decay and poor-quality potatoes at harvest. Soils susceptible to wind erosion or have poor water-holding capacity should be avoided. A good potato yield in Oklahoma is 200 to 250 hundred weight per acre. High temperatures or insufficient moisture in the late spring and early summer, while the potato tubers are forming reduces yield. With good management and weather conditions, yields of 300 hundred weight per acre are possible.

Select the potato variety best suited to your conditions and market (Table 1). It is also good to try new varieties in on-farm trials. Successful varieties can then be introduced to customers for input on making decisions for future varieties.  Buyers contracting potato production for chipping will designate the variety to be grown.  Potato varieties to consider are also given in Extension Fact Sheet  HLA-6035 “Commercial Vegetable Varieties for Oklahoma” available on-line.

Potatoes grow well with a wide variety of soils, and soil pH can be as low as 5.0, with best production between 5.5 and 6.8. Potatoes are less susceptible to scab when soil pH is between 5.0 and 5.5. If pH is too low, apply dolomitic limestone. Based on OSU soil test results, amounts of P2O5 (phosphorus) and K2O (potassium) are recommended (Table 2). Fertility recommendations based on your soil test results for specific vegetable crops can also be found on-line by going to the OSU Soil Testing website. Other fertility recommendations are available in Extension Fact Sheet HLA-6036 “Soil Test Interpretations for Vegetable Crops.”

Apply 55 pounds per acre N along with recommended P2O5 and K2O by either broadcast preplant incorporated or one half broadcast and one half with the planter in bands placed 3 inches to 4 inches to each side and 1 inch to 2 inches below the seed piece. Top dress or irrigate additional N when tubers begin to form. Two top dress applications of nitrogen at 75 pounds per acre, then 70 pounds per acre each may be needed. Too much nitrogen can be detrimental and decrease tuber quality, grade, yield and slow down maturity. Soils having a high amount of nitrate-N from previous fertilization, green-manure crops or livestock manure will require less N fertilizer. Potassium sulfate is preferred to potassium chloride as the potassium source since skin color and specific gravity may be adversely affected by potassium chloride.

Good water penetration and aeration are musts for proper growth and tuber formation. Excessive tillage and land preparation cause compaction and should be avoided. To be effective, the soil should be plowed below any compacted layer within the normal root zone, then disk harrowed before planting. Spike-tooth harrowing to break up clods and level the soil may be needed just prior to planting.

Use only certified seed tubers. Potato production costs are too great to risk using non-certified seed. Certified seed of good quality grown in the northern U.S. normally produces the largest yields, the highest quality tubers and the fewest disease problems. Pieces of large seed tubers are used for planting. Small whole tubers can be used with equal results. Seed pieces should be 11/2 ounces to 2 ounces in size. Using smaller seed pieces usually results in lower yields. Cut seed pieces can be suberized (healed over) before planting, but planting fresh cut seed is a normal practice, since growers usually lack the time and space to store large quantities of cut seed before planting. Treatment of seed pieces with fungicides may not always be necessary, as research has shown that such applications are likely to increase yield only when the cut seed pieces must be stored three or more days prior to planting. Seed required to plant an acre depends upon seed piece size and seed spacing (Table 3). Distance between rows is commonly 36 inches.

Planting should begin in early March in central Oklahoma and mid-March in northern Oklahoma to promote early crop development and avoid extreme summer temperatures. There are several types of planters available that place the seed pieces in the soil and apply fertilizer and systemic insecticides in one operation. Seed depth should be about 4 inches below the top of the planted bed. Soil is ridged over the row by throwing soil to the plants during early cultivation, so about 6 inches of soil cover the seed piece when tuber formation occurs. Depth for hilling differs among varieties.

Potatoes develop larger and more extensive root systems in response to proper cultivation. Loose, friable soil improves tuber set and development of smooth, well-shaped and even-colored potatoes. Cultivation may be necessary to control weeds, keep soil hilled-up, and aid water penetration and soil aeration. Cultivate only when needed. Deep cultivation should be avoided since many roots are damaged. Extra cultivations are expensive, increase soil compaction and reduce yield. Cultivation should be completed by the time plants reach full bloom.

Weeds must be controlled in potato fields, since they compete with the crop for water, nutrients and light, and are hosts for insects and diseases. Weed control can include systems that utilize cultivation only, herbicides or a combination of cultivation and herbicides. An effective weed control program takes into account problem weed species in the field. Fields containing perennial weeds should be avoided. Herbicide selection will involve becoming familiar with labeled herbicides for potato, understanding field weed pressure and what weed species the potential herbicide will need to control. In addition, growers should understand how the herbicide will be applied (i.e., pre-plant incorporated (PPI), preemergence following planting (PRE), postemergence (POST), and after crop emergence at drag-off or as a lay-by application). As with all pesticide applications, make certain to read and follow label instructions to ensure effectiveness, crop health and applicator safety. Various herbicides can be applied by ground rig or through the sprinkler irrigation system. For herbicide recommendations consult the most recent edition of OSU Extension Agents’ Handbook of Insect, Plant Disease, and Weed Control (E-832).

Soil moisture is probably the most important factor determining potato yield and quality. Twenty or more inches of water is required to produce a potato crop in central Oklahoma. When irrigation is practiced to supplement rainfall, it should be applied in frequent, but light amounts. Secondary growth and growth cracks occur when irrigation or rainfall occurs after moisture stress. Potato can be successfully grown using several types of irrigation including overhead sprinkler, furrow and drip irrigation systems. The soil should be kept uniformly moist until tubers have reached full size. Considerations for irrigation management decisions include: the effective rooting depth of potatoes is 2 feet; soil should not be allowed to dry below 65 percent of field capacity; moisture levels above field capacity will seriously affect yield and quality of potato. On extremely sandy soils, it is nearly impossible to prevent the soil from drying below 65 percent of field capacity, due to the low water-holding capacity of sandy soil.

Potatoes should never be planted in fields that have been in sod or grass the previous year. By avoiding this situation, one greatly decreases the chance of having wireworm and white grub problems. If potatoes are planted in soil that was in sod the year before, a soil insecticide should be used to prevent damage to the tubers from these insects.

Once emerged, potatoes are susceptible to cutworms, flea beetles, and leafhoppers. Flea beetles and leafhoppers generally are not major problems in Oklahoma. Cutworms are sporadic problems and can be severe in certain years. Treatment for cutworms is usually performed at planting or just after emergence.

Colorado potato beetle is the major insect pest of potatoes. Adults overwinter in the soil and emerge about the same time the potatoes are emerging. They usually appear in mid-April and feed on the young foliage. Eggs are deposited on the lower third of the plant on the underside of leaves. Larvae appear in mid-May and can cause extensive defoliation. Larvae are more easily controlled when they are small, and they also cause the least damage at this young stage. Thus, controls should be timed to coincide with the presence of small larvae.

Colorado potato beetles can be controlled with systemic soil insecticides or with foliar sprays. Crop rotation also aids in reducing their numbers. Potato fields planted after non-host crops (peanuts, wheat, sorghum, etc.) have fewer beetle problems than fields planted to potatoes the previous year(s). Defoliation by Colorado potato beetles affects potato yields most when the tubers are sizing. Early and late defoliation usually does not decrease yields enough to warrant treatments. Late defoliation after tuber sizing can be beneficial because beetle feeding may assist in killing the vines.

Other potato insects include aphids, which transmit viruses and can also stress the plants by sucking plant juices. Blister beetles can cause defoliation as they move en masse across the field; however, they are seldom plentiful enough to warrant treatment. 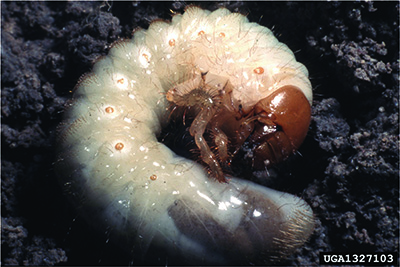 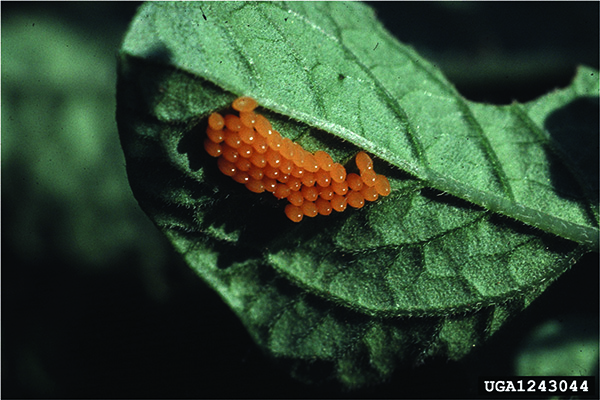 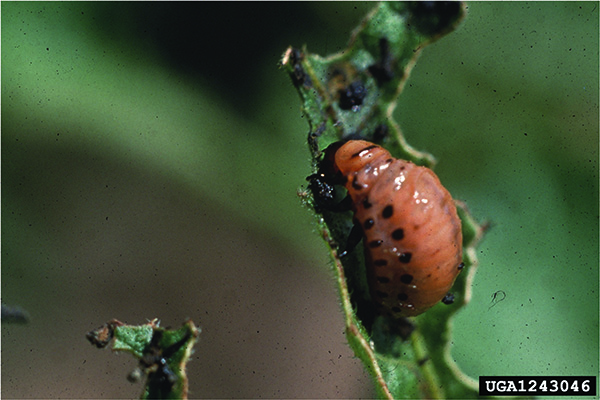 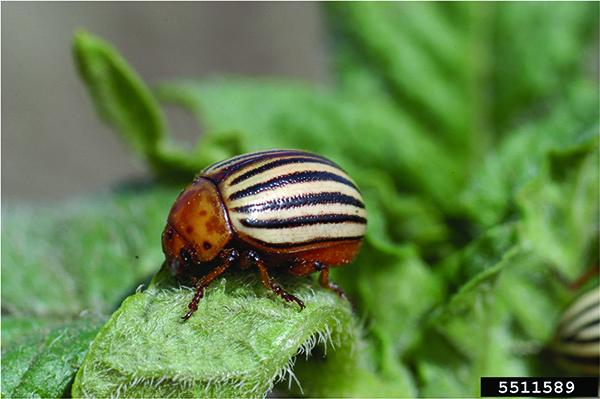 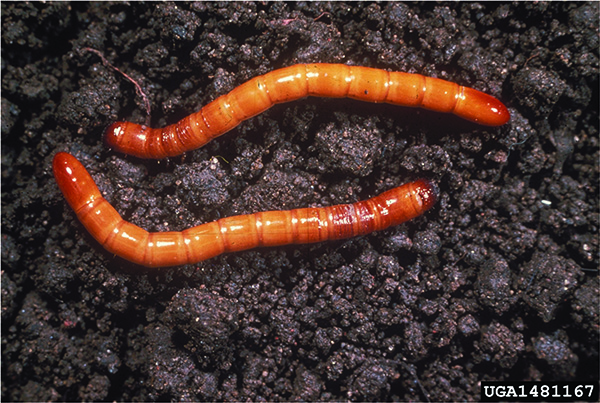 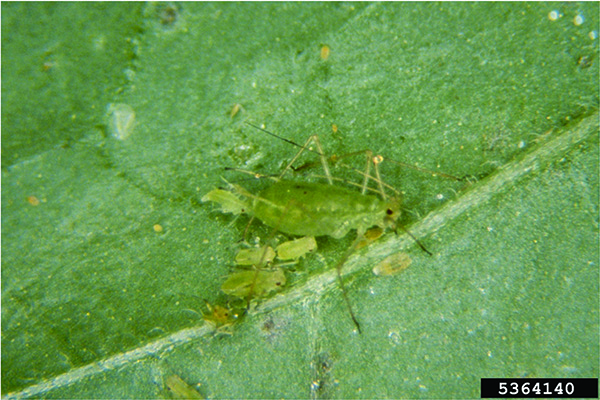 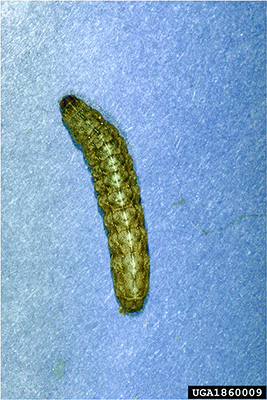 A very common fungal disease of the foliage is early blight (Alternaria). Fusarium and Verticillium wilts are also caused by fungi. Blackleg, a bacterial disease, is characterized by a blackening of stems and a yellowing and curling of leaves. Tubers of the potato are also subject to attack by a variety of pathogens. Various Fusarium species and the blackleg bacterium cause tuber rots. Rhizoctonia solani forms black sclerotia on the surface of tubers, which gave rise to the name black scurf for this particular disease. Another fungal disease of the tuber surface is common scab (Streptomyces).

Digging potatoes begins in late June and continues to the end of July. For the highest quality table stock potatoes, the tubers should be fully matured before digging. Vines may need to be killed by vine beaters or chemicals to promote good skin set. However, since potatoes are edible at any time, the question of when to dig must be decided by the grower. Considerations include price, demand, market conditions and expected yields. Early potatoes are sometimes dug before optimum maturity to take advantage of certain limited market demands and high prices. Processors may require a test for reducing sugars be made to determine if tubers are in the acceptable range for chipping into light-colored chips.

Potato harvesting is almost fully mechanized. The harvest machinery digs and loads the potatoes on trucks for transport to a shed where tubers are washed, graded and sized for bulk marketing or packed in bags or boxes. Due to high temperature conditions during harvest, speed is very important in handling the potato crop from digging to loading for shipment. Tubers bruise easily during harvest at temperatures above 85 F and below 50 F. Soil condition, tuber condition and harvester operation are important factors influencing bruising. Besides bruising, other common market defects are rots, cracks, skinning, enlarged lenticels, heat sprouts, greening and numerous diseases.