Phytophthora Blight of Cucurbits and Peppers

Phytophthora blight, caused by the fungus, Phytophthora capsici, is a widespread disease of cucurbits and peppers throughout much of the vegetable-producing areas in the eastern U.S. The disease has occurred less frequently in Oklahoma, where it has been observed on squash and watermelon. The disease is destructive and complete crop failures can occur with favorable conditions. The fungus requires very wet conditions for optimal reproduction and disease development. During periods of heavy rainfall and local flooding events, the risk of Phytophthora blight development is greatly increased. Once established in a field, management of Phytophthora blight is difficult and usually requires an intensive integrated pest management (IPM) strategy that incorporates careful site selection, host plant resistance, cultural practices and fungicide application. Phytophthora capsici is closely related to the potato late blight pathogen, Phytophthora infestans, which caused the Irish Potato Famine in the late 1840s, underscoring the devastating effects Phytophthora diseases can have. The purpose of this fact sheet is to aid in the identification of Phytophthora blight symptoms and provide management strategies to hopefully prevent its establishment.

Phytophthora blight symptoms can vary depending on the crop, the part of the plant infected and the stage of crop development. Usually, symptoms first appear in low-lying areas of a field where standing water commonly occurs. On squash and pepper, the most common symptom is crown rot. Elongated, soft lesions occur on the stem close to the soil line (Figure 1) and may extend several inches upward (Figure 2). Crown rot lesions are initially dark and water-soaked in appearance, but eventually turn light brown. Crown rot lesions girdle stems, resulting in rapid wilting and death of affected plants. On watermelon and cucumber, fruit rot is the primary symptom (Figure 3). Fruit of all known host plants are susceptible to fruit rot, whereas crown rot symptoms are more host specific. For example, crown rot is common on pepper, squash and pumpkin; but rarely occurs on eggplant, cucumber, cantaloupe and watermelon. Fruit rots are circular in shape and usually covered with a white, powdery layer of mold that largely consists of the pathogen’s reproductive structures, called sporangia (Figure 4). Fruit rots can be especially common when fruit is in direct contact with the soil surface. Fruit rot caused by Phytophthora blight can be confused with other, less damaging fruit rot diseases such as Pythium leak and Choanophora rot. It is important to note that several days or weeks may be needed before infected fruit show rot symptoms. Therefore, harvested fruit that were symptomless at the time of harvest may develop rot later, causing substantial losses in transit to market. Under severe disease pressure, foliar symptoms may also consist of circular to irregular brown spots with pale green margins. 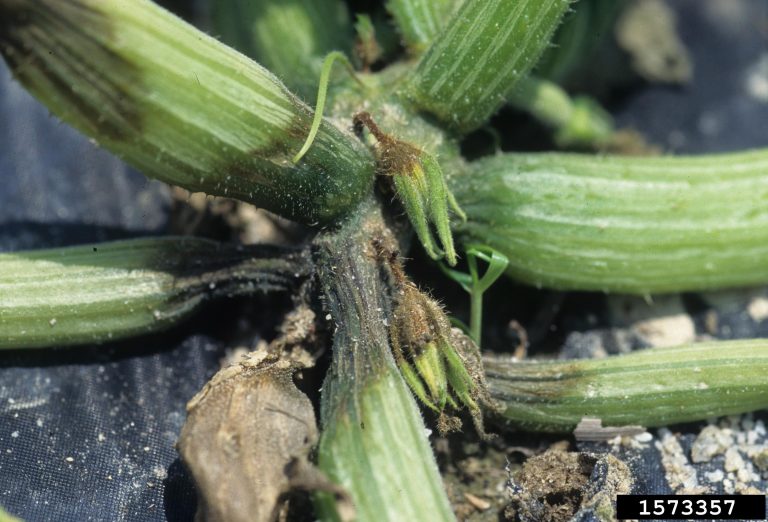 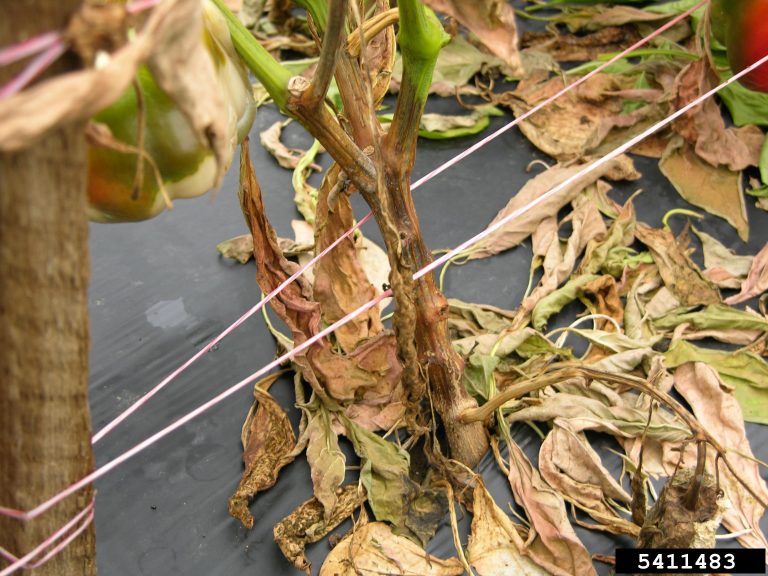 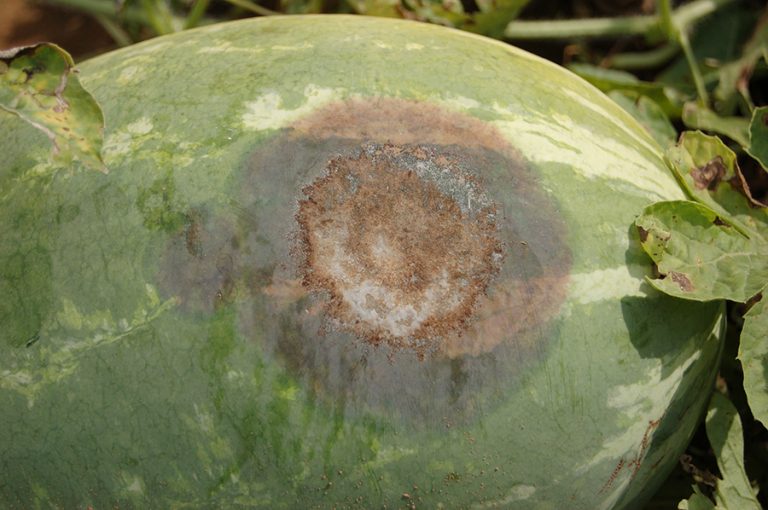 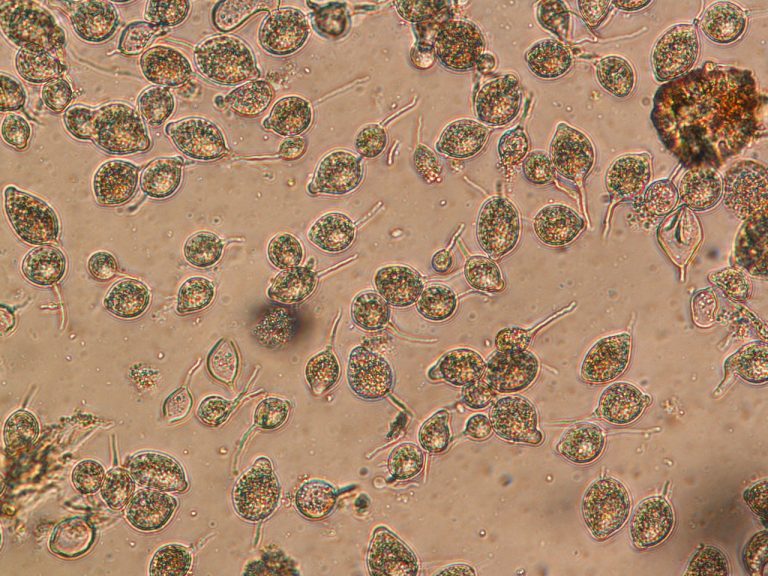 Phytophthora capsici is a soilborne plant pathogenic oomycete, a fungus-like organism that requires warm and wet weather for growth and disease development. Oomycetes are related to algae and thrive in water. Overwintering structures of P. capsici, called oospores, usually serve as the primary source of disease development. Oospores are persistent survival structures and can remain dormant in soil for up to 10 years. With favorable conditions consisting of saturated soil with standing water and temperatures between 75 F and 85 F, oospores germinate and infect plants directly or produce sporangia (Figure 4), which germinate by releasing spores called zoospores. Zoospores are motile, swimming, single-celled spores that are chemically attracted to host plants where they attach to plant surfaces and initiate infection. Zoospores move in surface water and infect plants near the soil surface or can be splashed onto aerial plant parts, where they cause fruit rots and leaf and stem lesions. As the disease develops, more sporangia are produced on diseased plants and can be carried to other plants or plant parts by wind or water, resulting in further spread of the disease. Multiple disease cycles are possible during a growing season, which contributes to the potential of this disease to cause severe damage. Dry conditions and a lack of standing surface water limits disease development. Since both mating types are usually present within a field, oospores accumulate in soil and plant debris, serving as a primary source of infection for subsequent crops.

It is important to properly identify Phytophthora blight because of the long-term impact it can have on vegetable production. Identification can be done through microscopic examination of diseased plant parts and/or molecular methods. However, microscopic methods are usually easier, more rapid and less expensive. Phytophthora capsici can be differentiated from other Phytophthora species most easily by its sporangial characteristics. Influenced by light and other cultural conditions, sporangia can have subtle to obvious differences in shape and size and are borne on stalks of different lengths and branching characteristics. Experienced diagnosticians rarely have trouble identifying P. capsici. Molecular methods are primarily used to differentiate closely related strains of this pathogen such as mating type, and in population and genetic variation studies.

Phytophthora blight of peppers and cucurbits is difficult to control. Currently, there is no single management strategy that is highly effective. Therefore, several methods used together in an IPM program are usually needed. The primary areas of focus in an IPM program for Phytophthora blight include site selection, sanitation, genetic resistance, cultural practices and fungicide application.

Site selection: It is best not to plant susceptible crops in a field infested with P. capsici. Through careful site selection, it may be possible to greatly reduce the chances that Phytophthora blight will ever become a problem. Avoid planting susceptible crops adjacent to fields known to be infested and where water runoff may be received from an infested field. To reduce the risk of a new infestation, low-lying fields with poor drainage where water collects also should not be planted with crops susceptible to Phytophthora blight.

Sanitation:  Sanitation practices are important for preventing the introduction of P. capsici into a field or production area. Avoid importing soil from unknown areas on equipment or plant roots where peppers or cucurbits are to be planted. Soil and plant debris clinging to equipment should be washed off before entering clean fields. Dumping diseased culls onto a production field is also a way to inadvertently introduce the pathogen into a new field and should be avoided.

Cultural practices:  Where Phytophthora blight is established, cultural practices should be used to reduce standing water that favors disease development. Raised beds should be formed in such a manner that water is drained off the field and firmed so depressions from transplanting, which can retain standing water, are minimized. Because P. capsici is an oomycete adapted to survival and spread in water, avoid irrigation with contaminated surface water. Use of well water or otherwise clean irrigation water reduces the chances for introducing P. capsici and other plant pathogenic Pythium and Phytophthora species into clean fields. If possible, overhead irrigation should be avoided in favor of drip irrigation,  to reduce puddling and rain splash, which favors disease spread. Irrigation timing should also be carefully managed to minimize the amount and duration of standing water. No-till production systems following small grains can be used to help promote water infiltration into the soil. The small grain stubble also helps minimize water splashing. Rotation with non-host crops is not very effective where the disease has become established because of long-term survival of oospores in the soil, but should be practiced in clean fields to minimize the build-up of disease.

Chemical control:  Fungicide programs can be used to reduce losses where Phytophthora blight is anticipated. Programs have relied on preplant banded application and early-season foliar application of the fungicides, mefenoxam or metalaxyl. However, in areas where Phytophthora blight is a chronic problem, resistance to these fungicides has become widespread, rendering them ineffective. Other fungicides have been developed for use to supplement or replace mefenoxam/metalaxyl as foliar sprays. In general, these fungicides are specific for oomycete diseases such as Pythium damping off, Pythium leak and downy mildews. Fungicide applications must be made preventively and prior to symptom appearance to be effective.  Fungicide programs for Phytophthora blight may fail with extended periods of rainy weather. Results are often inconsistent among fungicide trials conducted in different areas. Consult the latest edition of the Extension Circular E-832, OSU Extension Agents’ Handbook of Insect, Plant Disease and Weed Control for a listing of fungicides registered for use on peppers and cucurbits to control Phytophthora blight.