Rental agreements and rates are influenced by the landowner’s costs, the tenant’s expected earnings, previous rates charged, competition for the land, government programs, tax laws and the non-agricultural economy. The results of a statewide farmland leasing survey conducted in 2016 are reported here. Respondents were individuals contacted through the Oklahoma Cooperative Extension Service who agreed to complete periodic surveys plus recipients of a mailing by the Oklahoma Agricultural Statistics Service. Approximately 330 surveys were returned with useable data. Figure 1 shows regions of the state used in reporting survey results: northwest, southwest, northcentral and east. 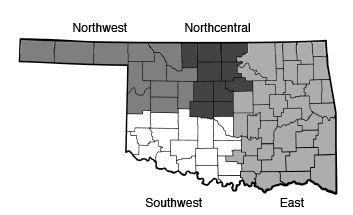 On average, rental agreements for native pasture had been in effect for 13 years, 11 years for Bermudagrass and 10 years for other pasture (Table 1). The statewide average lease size was 467 acres for native pasture, 226 acres for Bermudagrass and 204 for other pasture. Median values are provided as an additional measure of the central tendency of the survey response distribution. The median is the value at the midpoint of the survey responses. Survey results document some regional differences in rental rates and average sizes of tracts rented. Figures 1a and 1b show the distribution of statewide responses regarding acres and the years held for native and Bermudagrass pasture leases, respectively.

Figure 1a. Relative Frequency for Rental Statistics for Native Pasture, 2016-2017.

Figure 1b. Relative Frequency for Rental Statistics for Bermudagrass, 2016-2017.

Most tenants and landlords in Oklahoma appear to be satisfied with their lease agreements. About 65 percent of the respondents classified their leasing agreements as good or excellent from the standpoint of fairness with an additional 22 percent classifying their agreements as adequate. These levels of satisfaction have remained steady during the past several years.

Common methods of renting pasture include:

In addition to factors previously mentioned — the landowner’s costs, the livestock owner’s expected earnings and previous rates charged, etc. — the kind and quality of pasture, fences, location and water also influence the pasture rental rate. Negotiations determine the type of agreement and the relative weight given to different factors. 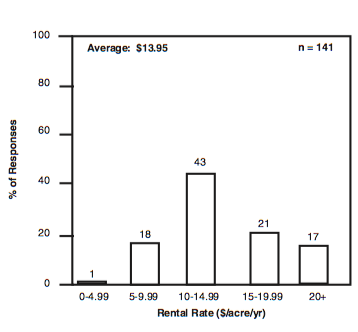 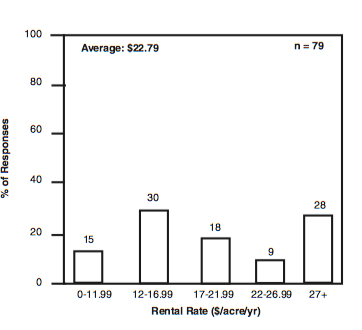 Pasture rental rates for stockers on small grain winter grazing averaged $0.38 per pound of gain and $0.45 for leases including grazeout, down sharply from 2014 levels (Table 3). Pasture lease agreements may assign responsibility for checking livestock, providing salt and minerals or supplemental feed or pasture, and repairing fence to the tenant or landlord or both. Table 4 summarizes the distribution of survey responses by type of pasture: small grain winter grazing, small grain grazeout and other pasture (includes native, Bermudagrass and other improved pasture). Generally, the livestock owner was responsible for most of the terms of the pasture lease, although there are opportunities for sharing by both parties. In the winter grazing leases, less responsibilities were reported to be shared compared to the 2014 survey, with some responsibilities like fertilizer costs shifted to the pasture producer.

Many lease agreements specify terms and conditions beyond the rental rate, which affect the value of the lease and the “real” rental rate. Tenants may or may not be allowed to hunt, harvest pecans, cut timber, use buildings or other improvements and lease out hunting privileges. Lime application costs or similar costs for improvements in which the benefits are returned over a number of years may be shared by the landlord and tenant, or if the tenant pays for them initially, repaid by the landlord at a fixed rate per year.

Tenants may be required to maintain fences, spray or clip weeds annually, provide liability insurance, share oil field damages, maintain terraces and leave strips of grain in the field for game. Landlords may provide a well and water, fencing material, or land for a mobile home. Tenants may ask for several months notice if the landlord wishes to terminate the lease agreement. In some cases, leases contain an option to buy with rental payments applied to the purchase price.

“Fair” rents must be negotiated between tenant and landlord. Regional or state average rental rates may be used as a beginning point for discussion and negotiation of rental rates. However, differences in land quality and improvements, and restrictions on land use can greatly impact the value of potential leases. Likewise, differences in family living expenses and hired labor costs can be substantial for different operations, affecting the maximum rental bids.

New legal restrictions and liability factors may call for changes in future farm lease agreements. Some farm management firms include language requiring that the tenant will be responsible for following label restrictions in the use of pesticides, for remaining in compliance with the farm’s conservation plan, and for disposing of wastes in a manner approved by the Environmental Protection Agency, etc. Some leases already stipulate precisely what fertilizers, pesticides, and seed may be used on the property. Both landlords and tenants must be aware of changing environmental laws and regulations to avoid potentially costly liabilities.

Related Publications and Other Resources

In addition to publications, worksheets and free downloadable sample lease forms are available on the site.

A 2020-2021 survey reporting the rental agreements, rates and influencing factors of leasing pasture land in Oklahoma.

How to determine fair rent, convert crop share to cash basis, increase flexibility to your cash agreement and advantages and disadvantages to a cash lease.

A 2018-2019 survey reporting the rental agreements, rates and influencing factors of leasing pasture land in Oklahoma.

A 2018-2019 survey reporting the rental agreements, rates and influencing factors of leasing farmland in Oklahoma.