Public school performance is always an important issue for communities. This is true both for parents considering raising their families in a particular location and for nearby businesses who may end up employing graduates of the local high schools. While the research relating school performance to economic development is mixed, there is significant evidence that improvements in education levels are linked with reduced crime, improved health of children and improved civic participation (Lochner and Moretti 2004; Currie and Moretti 2003; Dee 2004).

One issue of particular interest for Oklahomans is whether smaller schools tend to perform better or worse than average. One study using data from the mid-1990s found that consolidating Oklahoma school districts to make them larger would actually lead to decreased test scores (Jacques, Brorsen and Richter, 2000). This report uses 2014 data from more than 400 high schools across the state to (1) compare performance measures across school size and (2) attempt to determine whether the size of a high school plays a role in various measures of school “success.”

Figure 1 displays the locations of cities with high schools across the state, and also breaks out schools considered “small” (defined as less than 50 total enrolled students for the purposes of this report) and those considered “large” (more than 1,000 enrolled students). It is not surprising that the majority of small high schools are located in the more sparsely populated western half of the state, including six in the three Panhandle counties. It is also not surprising that most of the larger high schools are located near the major metropolitan areas of the state (Oklahoma City, Tulsa and Lawton). The average enrollment across state high schools is 375 students.

The remainder of this report presents some basic statistics about the performance of Oklahoma high schools by size and discusses the results of a simple analysis designed to uncover whether smaller high schools perform better or worse than larger or medium-sized schools.

The data for this report comes from the Oklahoma Educational Indicators Program (OEIP), which is funded by the state Office of Educational Quality and Accountability. Profile reports are made available at the state, school district and individual school levels. The reports are available at www.schoolreportcard.org and data is available for the years 1997-2014. The individual school reports include three distinct sections:

These report cards pull data from the Oklahoma State Department of Education, the State Regents for Higher Education, the Department of Career Technology Education and the Oklahoma Tax Commission, among others. A detailed analysis of the methodology behind the report and a summary of the 2014 community characteristics, educational process and student achievements results can be found in the OEIP’s State Report and Background and Methodologies (2014). This data is also supplemented with the newly implemented A-F School Report Cards, available at www.afreportcards.ok.gov. This numerical rating system gives a number grade (0-100), which is an indicator of the percentage of students, regardless of background, who are currently meeting or exceeding grade-level academic standards.

Figure 2 provides scatterplots and some basic correlations between school size and four common measures of high school success. Figure 2(a) demonstrates that there is a slight positive correlation between average GPA and size; however, the wide array of GPAs for schools with less than 250 students is evident. Figure 2(b) presents the strongest correlation, suggesting that larger schools outperform smaller ones in terms of average ACT score. However, some very small schools do quite well for this measure. Figure 2(c) demonstrates a slightly positive relationship between school size and school report card grade and Figure 2(d) suggests that larger schools have a higher rate of college-bound students. Overall, these correlations provide some evidence that larger high schools tend to outperform smaller ones in Oklahoma.

As another way of looking at this data, Table 1 breaks the four performance metrics above into three categories of schools:  small (<50 enrolled), medium (50 to 1,000) and large (>1,000 enrolled). The variation in GPA across the categories demonstrates that small high schools actually have slightly higher averages than larger schools. However, the average ACT score and school report card grade generally increases with school size. The percentage of college-bound students is similar between small and medium students, but is higher for large schools.

Other school characteristics vary across school sizes as well (Table 2). In particular, the percentage of parents attending parent-teacher conferences is much higher in small schools, and although the total number of teachers is much smaller, the teachers per enrolled student are actually higher at smaller schools. Teacher experience and salary are comparable across the categories. Interestingly, the average number of days absent increases as school size increases, as does the percentage of single parent families. 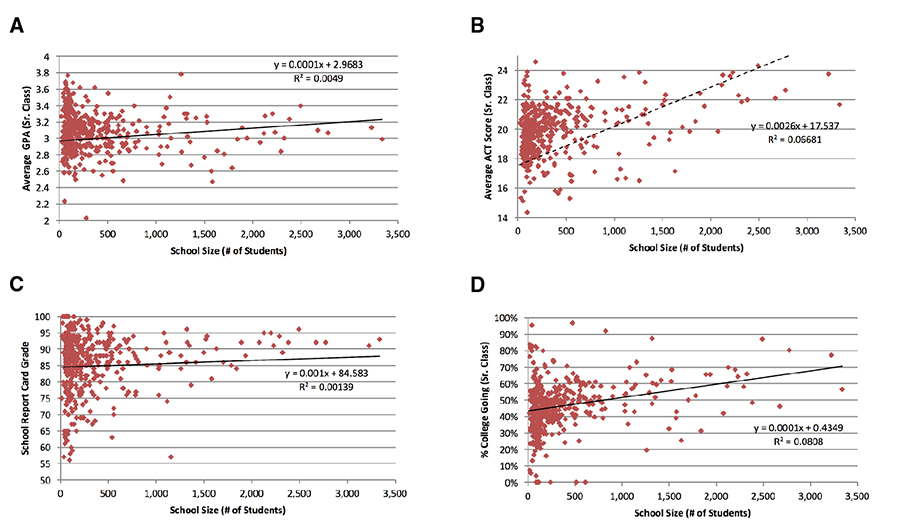 The simple correlations displayed in Figure 2 show that generally, school performance increases with size. However, that correlation did not take any other factors into consideration – like the education level of the local population, the number of teachers per student or the percentage of single parent households in the area. To single out the impacts that each specific factor might have on school performance, a technique known as regression analysis is used. This statistical process helps explain how one variable changes when any one of the predictor variables change. Table 3 displays the results of regression analysis using a host of potentially influential predictor variables on each of the measures of success. If being a small school is an advantage (or disadvantage) for a particular success measure, there would be a statistically significant coefficient associated with the ‘small’ variable (defined as less than 50 enrollment).

The results from Table 3 suggest that even after controlling for other factors that could affect school performance (including district population), there is still a negative affect associated with a school being “small” for three of the four measures of success. For the average ACT score, there is no statistical significance reported. Other variables that are highly statistically significant across the four measures are the percentage of students eligible for free lunch (negatively related in all four cases), average teacher salary (positively associated in three of four cases) and the percentage of local residents with a college degree or more (positively associated in three of four cases).

Interestingly, when the definition of a “small” high school is changed from 50 students to 100 students, being “small” no longer has any statistically significant impacts on any of the measures in Table 3. Thus, there does seem to be a cutoff point after which the negative relationship no longer holds.

There are undoubtedly many positive aspects of smaller high schools, including smaller class sizes, more parental involvement and higher CareerTech participation. However, the current results demonstrate that for several traditional measures of high school success, smaller high schools in Oklahoma do perform worse than their larger counterparts.

A board chair is a member of the board of directors elected by the panel for a specified term and has a key leadership role within the duties that follow.