The Madagascar hissing cockroach, Gromphadorhina portentosa (Schaum), is native only to the island of Madagascar. Madagascar, the fourth largest island in the world, is located off the east coast of Africa. It has a tropical to subtropical climate that supports an extremely diverse fauna, including some of the largest insects in the world. On Madagascar, this insect is primarily a food source for larger animals such as lemurs, birds, and lizards. Worldwide distribution is limited to laboratories, classrooms, and pet stores. The large size and relative tameness of this species makes it an ideal insect pet. The following material was written to provide owners of such a pet or classroom project information on the biology and care of the Madagascar hissing cockroach.

The Madagascar hissing cockroach (MHC) is approximately 2 to 4 inches long and weighs 1/4 to 7/8 ounces. The roach is heavily sclerotized, giving it a brownish or black color over the entire body. Immediately after the molting process, the MHC will exhibit a white coloration until the exoskeleton hardens. The cockroach should not be handled during this time to avoid hurting it in this delicate stage. Unlike many other cockroaches, this species is wingless, but can run rather quickly. The male roach has two large tubercles (bumps) on the dorsal surface of the prothorax (Figure 1). At first glance, many people confuse these tubercles with eyes; however, the head is actually located underneath this area and is protected by the heavy armor of the prothorax. The female MHC also possesses these bumps; however, they are not as prominent and are rather smooth (Figure 2). Both sexes possess a modified second abdominal spiracle (breathing port on the side of the body). By forcing air through these spiracles, they can produce a hissing sound during mating, fighting or when they are disturbed. The roaches are equipped with special pads on their feet that allow them to climb most surfaces, including glass. 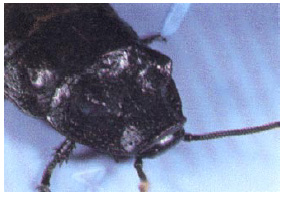 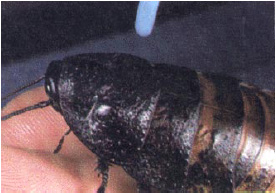 The MHC is one of the rare ovoviviparous species of roaches, producing eggs that hatch within the female’s body. This makes it appear that the female is giving birth to live young. After fertilization, the eggs are actually incubated by the female in a special brood pouch within her body. The gestation period under laboratory conditions is about 60 days. The female pushes the nymphs out of her body after they hatch. The roach exhibits gradual metamorphosis (development as eggs, nymphs and finally adults), where the immature nymphs look similar to the adults but are smaller. The nymphs undergo six molts (six nymphal instars). It requires nearly five months for the roaches to become sexually mature.

Similar to other cockroaches, the MHC is negatively phototactic (moves away from light) and, therefore, is nocturnal in activity. The MHC is also omnivorous (eats anything), but is strongly attracted to peanut butter, bananas and oranges. When living in colonies, this species exhibits a definite social hierarchy. Males will establish and defend a territory on a rock or other similar structure for several months. He will leave it only for brief periods to obtain food and water. Female MHC are gregarious (form groups) and have not been observed to fight either among themselves or with males. Females and nymphs are allowed on the defended area that may harbor several adult females and an assortment of various-sized nymphs, but only one male. When a male intrudes on a neighboring male’s territory, a fight will ensue. One male will attempt to push the other out of his territory. During the battle, a great deal of movement and hissing will occur; however, no harm is done to the loser. Mating behavior of the MHC is elaborate and involves posturing and hissing by the males to attract females.

The MHC is relatively easy to care for and makes an excellent pet. Owners should maintain their pets in an area that provides a dark, moist and secluded environment. Often laboratory colonies are maintained in large, dark trash cans, with cardboard dividers or wire mesh to add extra surface areas for the roaches to climb. Entomologists working with roaches usually keep them in glass or plastic aquariums (like hamsters). Wood chips, moist peat or sphagnum moss may be provided as a type of bedding they can burrow under to hide from the light. Small rocks or tubes can be added for the roaches to have a territory to defend. Screen covering or another secure type of lid for the cage is necessary. Specially padded feet enable MHC to climb any surface, so it is important to make sure the cage is adequately sealed. Be sure to provide adequate ventilation for your pets and do not allow the medium (living environment) to dry excessively. An occasional misting of the medium with water will provide the proper humidity for the roach’s cage. The cage should be placed in a warm location (72 F to 76 F). Higher temperatures (80 F or better) will increase activity and breeding, while lower temperature (70 F or lower) makes the MHC sluggish and inactive. Do not keep these roaches at temperatures lower than 65 F. High temperatures in their native habitat often exceed 100 F, and the MHC thrives in warm environments.

Because they are cold-blooded animals, MHC may require an external heat source to maintain proper metabolism. This can be achieved in several ways. One simple method is to maintain room temperatures between 80 F and 85 F. Unfortunately, this is impractical unless a separate insectary-type room is available. A more efficient way of providing heat is with a heat tape or heating mat that attaches to the bottom of the aquarium. Hot rocks, which are synthetic rocks containing a heating element, are another option. These heating devices are designed for reptiles and are available at most pet stores. Placing the device at the end of the aquarium will create a temperature gradient allowing the insects to properly regulate their own body temperatures. Unless you plan to breed the roaches or have a poorly heated room, an additional heat source is unnecessary.

The MHC is an opportunistic feeder, often utilizing ripened fruits that fall to the rain forest floor in Madagascar. This fruit will provide much of the moisture required for the MHC; however, they occasionally drink dew from surrounding plants.

Captive MHC enjoy a wide variety of foods including dry, processed foods for dogs, cats, fish, chickens, monkeys and rats. Supplement the diet with fruits and vegetables, including orange slices, banana peels, carrots, apples, grapes, sweet potato peelings and potato slices. Use small pieces (one inch square or less) and feed moist food sparingly, since high concentrations of fermentation gases are harmful. The MHC colony at Oklahoma State University thrives on a steady diet of dry dog food and water. This colony has been maintained for more than sixteen years, with many successful generations reared. Water is provided using a cotton wick method. A tightly sealed plastic container is filled with water. A small hole is drilled in the lid of the container and a wick is placed through the hole and into the water. Roaches can then drink from the wick as it soaks up water. Wicks can be made from cotton rolled into appropriate lengths. They may also be made from nylon stockings or other absorbent materials. Water may also be provided in a small dish or cup. It is important to place a small sponge inside this type of container so smaller roaches will not fall in and drown.

After you have your colony or individual roaches for a while, you may begin to notice tiny light-colored creatures crawling on the roaches. Similar to dogs getting fleas, the MHC sometimes carries mites. These mites only live on the roaches and will not harm them or live on humans. Their presence often indicates a problem with sanitation within the cage. Leaving food or dead roaches in the living environment can attract these mites and provide a medium for their survival. Mites can be removed by gently shaking the roach in a plastic bag with a small amount of flour added. The mites fall off the roach and into the flour. Remove the roach, then tie up and discard the bag. Gently spray the excess flour off the roach with plain water from a plant mister or wash bottle. Mites may also be removed by brushing the roach with a small paintbrush. Repeat the treatment if mites reappear. Do not attempt to use a miticide to kill the mites, since this will also kill your pet.

When handling a MHC, pick up the insect very gently around the thorax (the hard section behind the head with the bumps) or simply pick up the container and dump the cockroach onto your hand. Be careful not to jerk the insect, since the feet have sticky pads and hooks that grip tightly. If you pull too hard, you may injure the insect. Do not attempt to hold the roach down with your hand. The sharp spines on the legs can be used as a defensive mechanism and can draw blood. Simply let your pet roam about freely from one hand to another. The MHC will not bite and is not extremely fragile; however, always be as gentle as possible.

Madagascar hissing cockroaches can be used in classrooms or at home to study or observe insect life processes, behavior and even art. These large insects serve as excellent specimens to demonstrate basic or advanced experimental concepts about the insect world. The next page has a compilation of possible studies or observations to conduct on your MHC.

Each of these studies is not exclusive of one another, nor do they represent the realm of possibilities in observing insect behavior and life processes. Hopefully, they will lead you to discover other means of exploring the largest and most diverse group of animals in the world . . . the insects.