Large patch is an occasional disease of warm-season turfgrasses (hybrid bermudagrass, zoysiagrass, and St. Augustinegrass) in Oklahoma. The disease can occur in residential, landscape, and recreational warm-season turfgrasses.  In Oklahoma, the disease is most noticeable in early spring when turfgrasses are breaking dormancy and weather conditions are wet and mild. In some years, the disease is also evident in the fall.  However, infection by the pathogen during this time of year may not always result in visible symptoms.

Affected areas may range from inches to many yards in length or diameter (Figures 1 and 2). The turf in affected areas will thin and grass leaves may appear bleached or yellow (Figure 3). Large circular, semi-circular, or arcs of damaged turf will be apparent. When the disease is active, the interface between healthy and diseased turf may appear orange or bronze in color (Figure 4). Orange-bronze borders of the patches are most apparent on zoysiagrass. Symptoms associated with other turf diseases including leaf lesions, a white, cottony growth (mycelium), and “smoke rings” at the edge of the diseased areas will be absent.  Patches are perennial and year to year some areas may expand in size or other areas may diminish or dis-appear.  Affected shoots can be easily pulled from points of attachment (sheaths) and the base of the shoot may appear wa-ter soaked. As plant stand density is reduced, weed encroachment is common both during and after disease development (Figures 3 and 4). 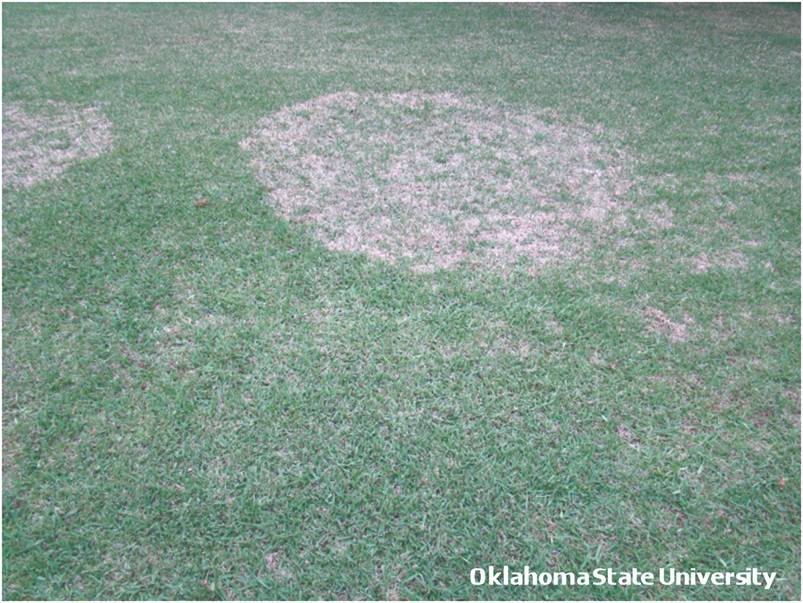 Figure 1. Symptoms of large patch on a mixed sward of St. Augustinegrass and bermudagrass in Southeastern Oklahoma. 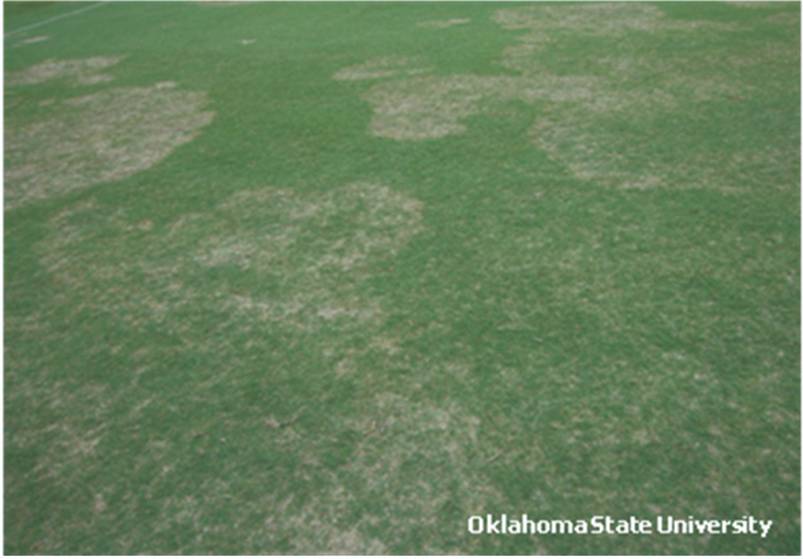 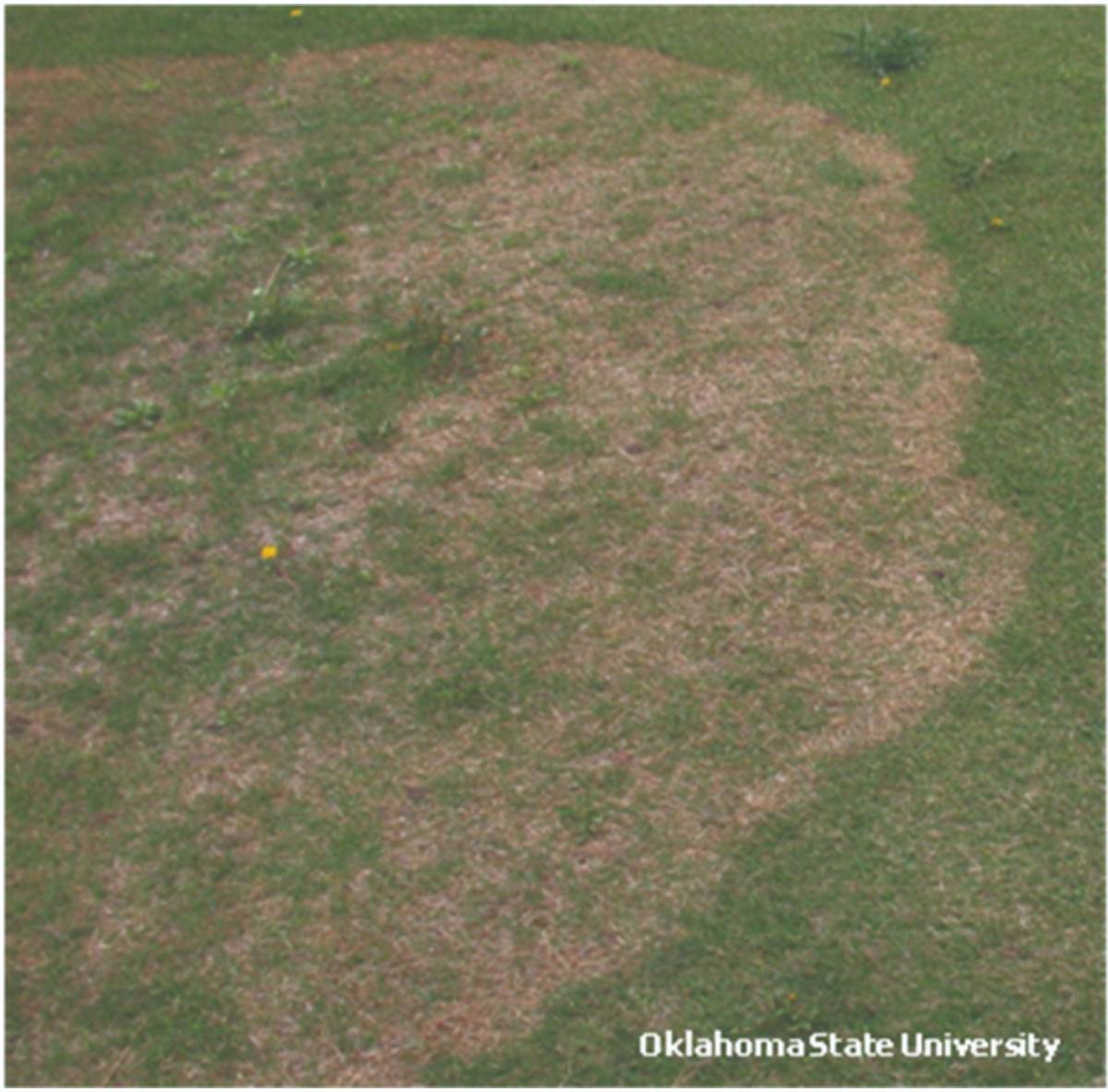 Figure 3. Symptoms of an actively expanding patch on bermudagrass caused by R. solani. Note the weed encroachment in the thinning areas. 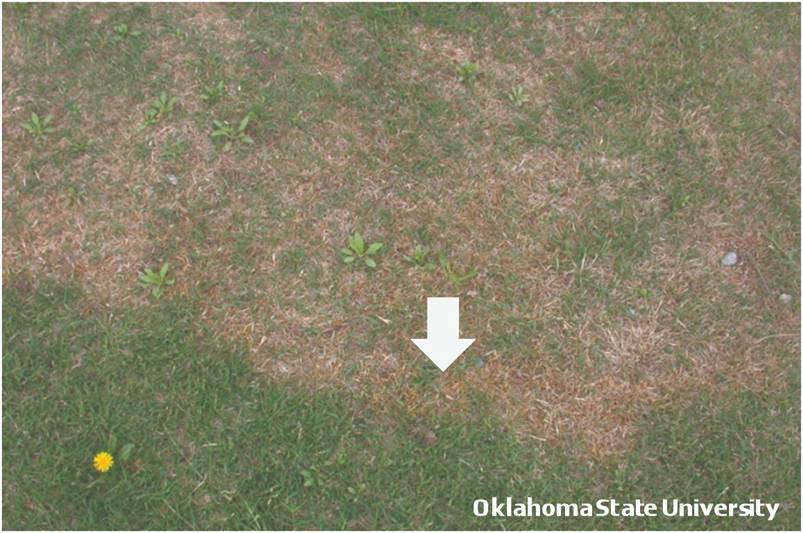 Figure 4. “Bronzing” symptoms (arrow) exhibited by plants at the margin of an actively expanding patch.

The fungus, Rhizoctonia solani is the causal agent of large patch. This fungus and several related species are responsible for numerous turfgrass diseases (including brown patch and yellow patch) that can occur at anytime on all grasses, except during very cold winters. The fungus overwinters as dormant thread-like fungal strands (mycelium) in infected plants or as special survival structures (sclerotia). The production of true spores does not occur. Therefore, spread of this fungus can occur through movement of infected plant parts or soil by equipment, people, animals, water, or wind. Epidemics are typically initiated when temperatures are mild and prolonged periods of high humidity exist. In Oklahoma, infection of susceptible grasses begins in late September when soil temperatures are above 50° F, moisture is adequate, and may continue until dormancy. Fungal activity can resume in early spring but is suppressed by soil temperatures that exceed 85° F.

Turfgrass grown under high nitrogen fertility that is applied too late in the year or very early in the spring is more prone to the development of large patch. Turfgrass that is also excessively irrigated, has abundant thatch, or poor air circulation above the canopy can be predisposed to disease. Extended periods of wet, mild weather can lead to severe epidemics. During summer months the disease subsides, patches will fill in with new grass growth, and the fungus will survive in thatch as mycelium or as resting structures.

Large patch usually does not kill the stolons or rhizomes and surviving plants can fill in the affected areas during summer months. Avoid application of nitrogen fertilizers in early spring when the pathogen is active (wait until soil temperatures are warmer) and after September 15th. When irrigation is required, apply a sufficient amount of water to wet the soil and then water as infrequently as possible without causing drought stress between irrigation events (Consult http://sip.mesonet.org/ for proper irrigation recommendations for your specific situation). Avoid frequent applications of small amounts of water, unless the water is used briefly to remove morning dew. When the disease is active, do not de-thatch or core aerify as this can spread the fungus. Wait and remove excessive thatch or aerify in the summer; these activities may help reduce disease severity. Very little is known about plant resistance to large patch.

Few effective fungicides are available over the counter for the homeowner to use for large patch management. However, effective fungicides are available to the professional turfgrass management community for large patch control. For chemical control to be effective, fungicides should be applied in the fall before disease development is evident. A repeated fungicide application 30 days later may be required if environmental conditions are still conducive for disease. It is recommended that the affected areas are photographed in the spring and that fall fungicide applications are targeted to only those areas where the disease was present. Spring applications are generally not effective. Fungicides should not be the only management tool. An integrated pest management (IPM) program that combines cultural and chemical management and considering other potential pests, should be used to manage large patch effectively without encouraging other turfgrass pest problems. For suggested fungicides, rates, and application intervals, refer to the current circular E-832, OSU Extension Agents’ Handbook of Insect, Plant Disease, and Weed Control.