Ornamental plants have one major job: to be attractive. They are found in homes, businesses and parks and are often used to create spaces in which people can enjoy and relax. To look their best, plants need certain nutrients. Iron is important for all plants, as it is part of chlorophyll, which plays the major role in photosynthesis. It is also found in enzymes that allow the plant to function and grow. Iron is a micronutrient needed only in small amounts.

Iron in the Soil

Iron is abundant in most natural soils. It exists in two main forms: ferrous (Fe2+) and ferric (Fe3+). These positively charged atoms stick to the surfaces of the soil particles, which are negatively charged. It works just like a magnet, holding the iron in place. These strong bonds often hold more than 50,000 pounds per acre of iron in the soil. The red in Oklahoma soils comes from the iron attached to the soil’s surface. Most of that iron is not in a form that plants can easily uptake. To get iron into their systems, plants roots must pull the iron off of the soil surfaces.

Soil pH can affect how well plants are able to take up iron. In Oklahoma, the eastern side of the state tends to have acidic soils. Higher rainfall helps flush out basic elements of the soil like calcium and potassium, leaving a lower pH. The western side of the state tends to have alkaline, or basic, soils with pHs above 7. Western Oklahoma receives much less rainfall than eastern Oklahoma, and the soil contains more calcium, which keeps the pH high. At lower pHs, most plants get enough iron from the soil.
Most plants will not have iron deficiencies in soils below a pH of 6; however, some plants start becoming iron deficient at a pH of 6, while others do not become deficient until the pH exceeds 7 (Table 1).

Table 1. Plants that become iron deficient below 6 or above 7.

Besides pH, other soil factors can limit plants ability to take up iron. Soils with high clay content, often referred to as “heavy”, may have low iron availability. These soils usually have less organic matter, which helps plants get iron into their systems. Adding compost to these soils can help correct the problem. Heavy soils frequently have issues with compaction and drainage. In soils that stay wet or do not drain for long periods of time, roots do not get enough air, reducing their ability to take up iron. Improving the drainage of an area by adding compost can help. Additionally, an overabundance of phosphorous can restrict iron uptake. Phosphorous prevents iron from entering plants, so fertilizing with no phosphorous (20-0-5 for example) fertilizers will allow phosphorous to leave the soil, making it easier for plants to get to the iron in the soil.

Iron deficiency symptoms become more prominent over time. New leaves near the ends of branches or the tops of the plant start to turn yellow first. They will also have a symptom known as interveinal chlorosis (Figure 1). The veins running through the leaves will still be green, while the areas in between turn yellow. As the deficiency becomes more severe, the veins can also begin to lighten and brown spots can start to appear on the leaves. Those brown spots will spread and eventually the leaves will die. 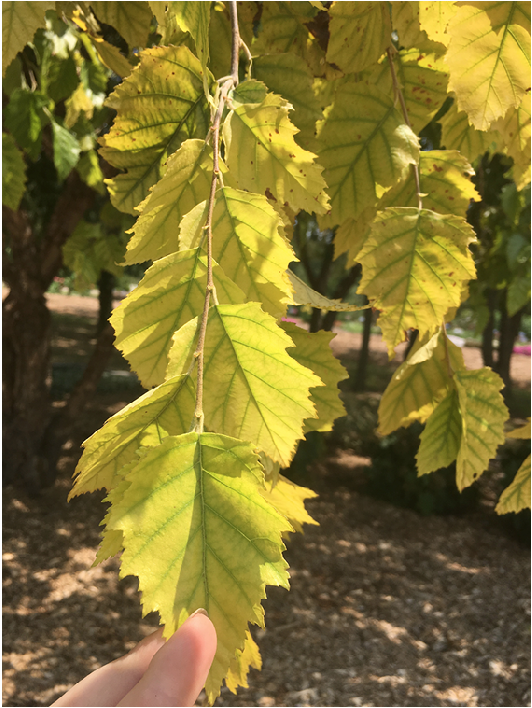 Figure 1. Late stage iron deficiency in a river birch. The veins are still green, while the surrounding areas have turned a bright yellow.

Manganese deficiency and iron deficiency share common symptoms. Newer leaves will have interveinal chlorosis, and in severe cases, will form brown spots. However, manganese deficiencies turn the areas between the veins a whitish or greyish color. Nevertheless, it can still be difficult to tell which nutrient is deficient. A soil test or tissue analysis of plant leaves is the way to definitively know if a plant has an iron deficiency. With tissue analysis, the exact iron levels in the plant are determined. Plants not iron deficient will have 50 ppm or greater iron content in dry matter tests. Soil tests provide information on how best to treat the deficiency. Fact sheet PSS-2207 How to Get a Good Soil Sample provides information on how to take the most useful soil sample. County Extension offices can offer additional assistance, as well as provide soil and foliar sample bags, send the sample to be tested and help interpret the results.

Correcting Iron Deficiency in the Landscape

There are different options for correcting iron deficiencies. Each works a little differently, which is why a soil test is recommended. Understanding why a deficiency is occurring helps in choosing the best method for remedying the deficiency.

If there is an adequate amount of plant-accessible iron in the soil (above 4.5 ppm) and the pH is high, the pH of the soil will need to be lowered. Elemental sulfur or sulfur compounds can help lower soil pH, but have to be incorporated into the soil, as sulfur does not move easily (Table 2). The sulfur forms weak sulfuric acid in the soil, which lowers the pH. Aluminum sulfate is a commonly used sulfur compound for lowering soil pH, but can be more expensive than elemental sulfur. Also, it contains aluminum, so if over-applied, can cause aluminum toxicity.

If the pH is at an acceptable level for the plant and the amount of plant-accessible iron is low, iron will need to be added to the soil. This can be done by using an iron fertilizer. These contain a fairly high level of iron, some of which is immediately available to the plants. The rest becomes attached to soil particles, helping to increase iron levels in the soil. Some common iron fertilizers also contain sulfur, calcium and soil bacteria, all of which help increase the level of plant-available iron.

Iron-deficient trees have another option for correcting iron deficiency. Iron supplements such as ferric ammonium citrate can be injected right into the trunk. This method should only be done by trained professionals, and is a temporary solution. The soil must also be treated, either by lowering the pH or by adding iron. Without correcting the soil, the tree will redevelop the deficiency. Table 3 shows many of the available iron fertilizers mentioned here.

Correcting Iron Deficiency in the Greenhouse

Greenhouse plants can become deficient of all nutrients over time. Iron deficiency is especially a problem with petunia, calibrachoa, pansy, verbena and dianthus (Figure 2). These plants become iron-deficient at fairly low pHs, around 6.2. Iron deficiencies generally occur later in the growing period, since media starts at a low pH and tends to drift higher. If the pH is above 6.2, it can be lowered using an acidifying fertilizer, or by lowering the pH of the irrigation water. If it is not possible to lower the pH, iron supplements can be added. 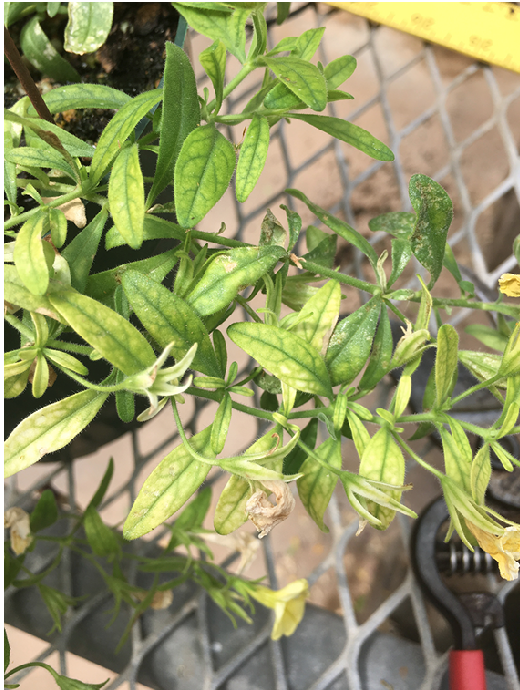 Chelated iron is a common drench, as it is in a form plants can take up immediately. It may need to be applied several times a season, as it can leach from pots, and the iron deficiency can recur. There are several different types of chelating agents available; each one is better for different situations. The most effective is generally EDDHA. It works best when the pH is above 7, but is generally the most expensive. EDTA, DTPA and EDDS work well when the pH is below 7, and are usually less expensive. EDDS is a newer chelating agent and has the added benefit of being more environmentally friendly than other chelating agents. Foliar iron supplements can be applied to the leaves, but can cause yellowing of the leaves if over-applied. It must be applied several times in a growing period to prevent symptoms from returning.

Another product that can supply iron is a newer, controlled-release iron supplement called Osmocote Iron (ICL Specialty Fertilizers). It works similarly to other controlled-release fertilizers and provides a steady supply of iron over five to six months, depending on the temperature. It can be mixed into the media before planting if a deficiency is likely, or top dressed into the pots as an iron deficiency occurs. Osmocote Iron works at a rate of 1 gram per 6-inch pot, and 2 grams per 8-inch pot. If pots are being leached, then a second application may be required. Controlled-release iron supplements give some flexibility and are much less time- and labor-consuming than chelated iron drenches or foliar sprays.