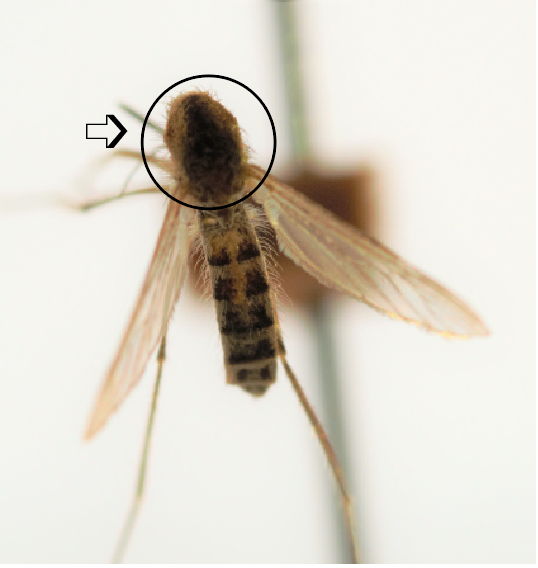 Abdomen: last body region of the insect and has no legs or wings. 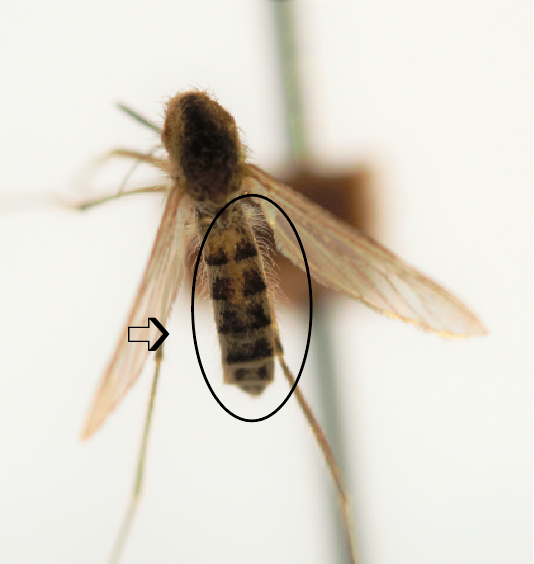 Palpi: Paired structures on either side of the mouthparts (proboscis) 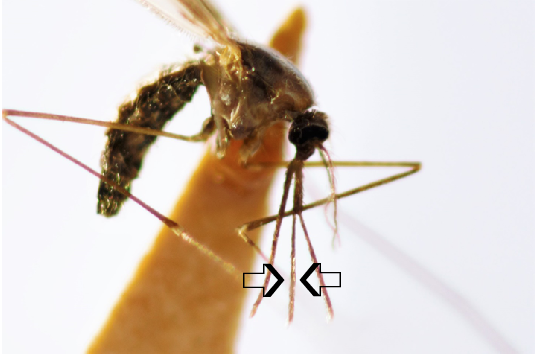 Aedes: Very common genus containing species that are from small to medium in size. The tip of the abdomen is very pointed (marked in picture). There are many important disease vectors in this genus. 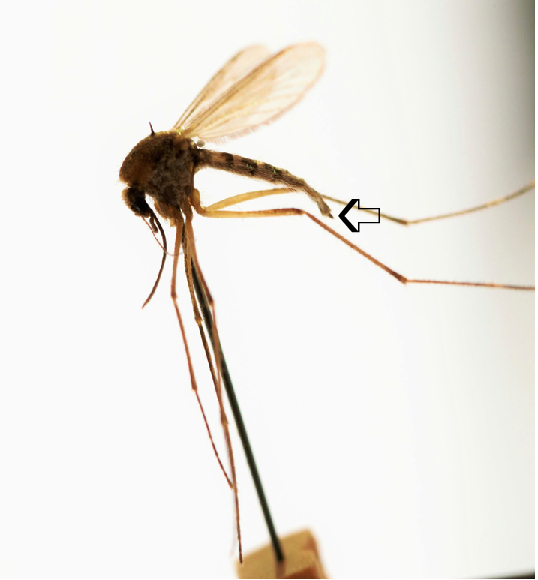 Psorophora: Largest mosquitoes in Oklahoma. Easily identified by their size and thick hindlegs. These mosquitoes are very painful and persistent biters, although they are not commonly hosts of disease. 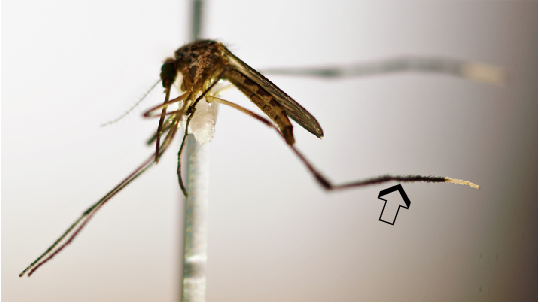 Absence of a pointed abdomen

Culex: Quickly identified by presence of a very blunt abdomen (marked). Usually small to medium-sized mosquitoes. They are usually found in bodies of water that contain sewage and/or are poorly oxygenated. 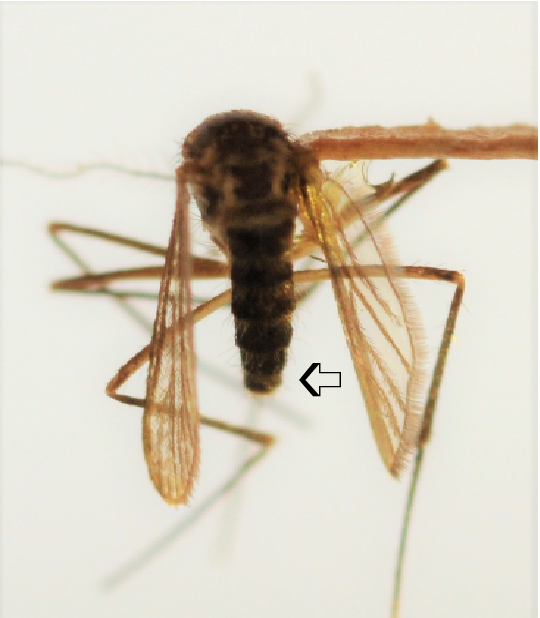 Anopheles: Easy to identify by noting the slender body with long legs. Palpi are as long as the proboscis (indicated by arrow). They are found in a variety of habitats but some species prefer very clear water. 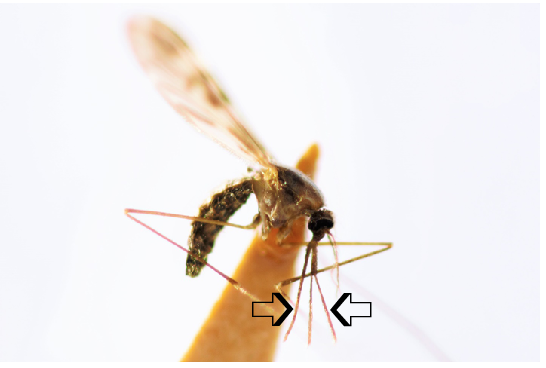 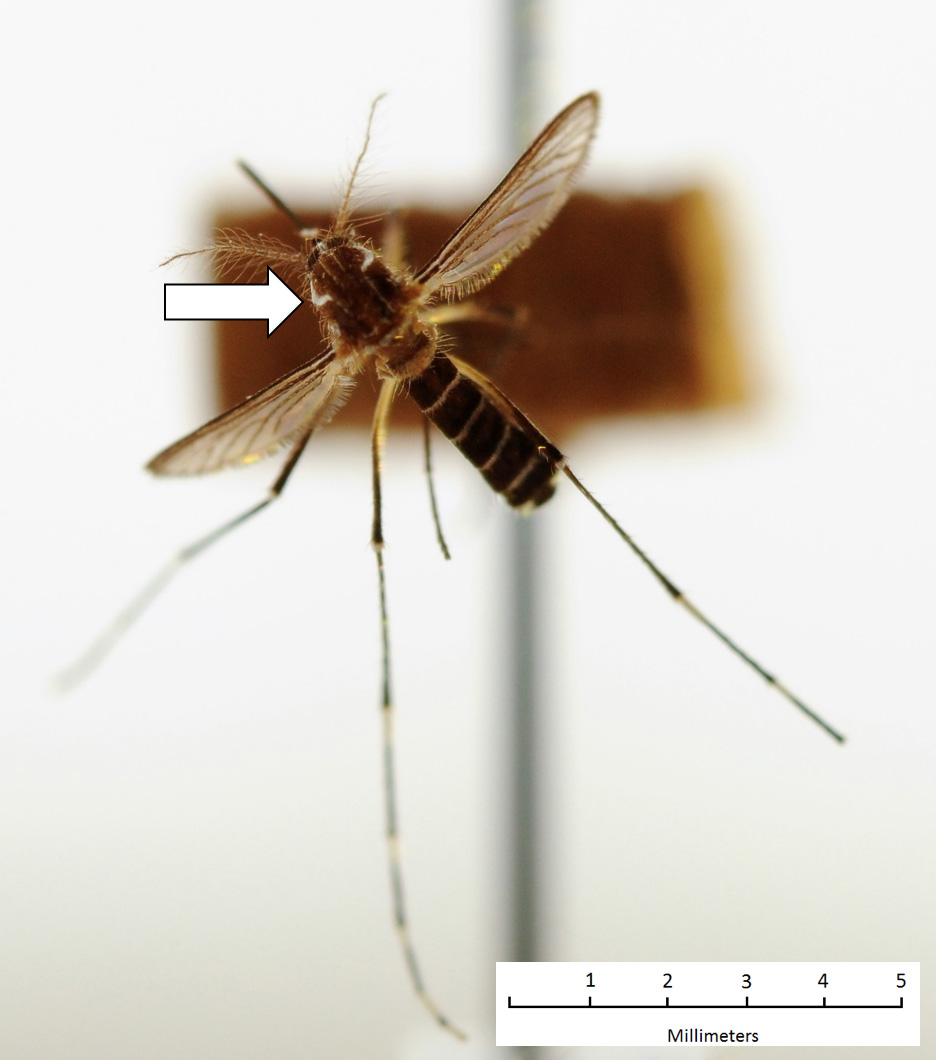 Small to medium black mosquito with white stripes on body and white curved lines that resemble a harp on a black background on top of thorax (indicated by arrow).
Prefers to lay eggs in small containers, similar to Aedes albopictus. Removal of water containers, including old tires, flower pots and clogged gutters is the best control method. Native to sub-Saharan Africa.

Vector of: Chikungunya, yellow fever, dengue and Zika virus.
This species is easily confused with Ae. albopictus. Careful attention should be paid to the white pattern on the thorax. This species bites during the day. It is commonly found associated with tires, where it lays eggs in collected rainwater. 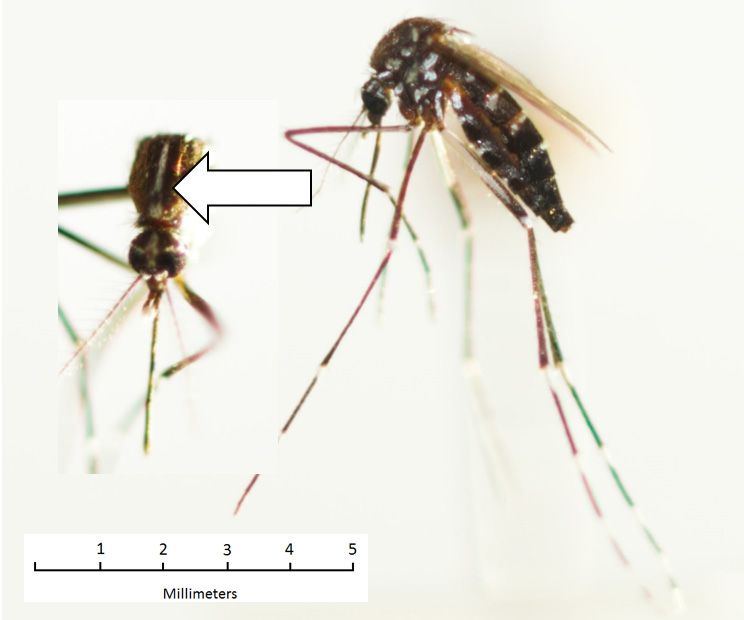 Small to medium black mosquito with white stripes on body and a parallel white stripe on top of thorax (indicated by arrow).
Prefer to lay eggs in small containers, such as buckets and flower pots. Remove these containers for control. Native to Southeast Asia.

Vector of: Dengue, chikungunya, West Nile virus, Eastern Equine encephalitis, Japanese encephalitis and dog heartworm.
Ae. albopictus has been a common pest in the U.S. since 1990. This species of mosquito prefers to feed on humans more than any other host, but will also feed on mammals such as dogs and cats. They will also feed on birds. This species feeds primarily during the day. Larvae are often found in containers left outside by humans for more than a month. Control by removing containers that hold water. 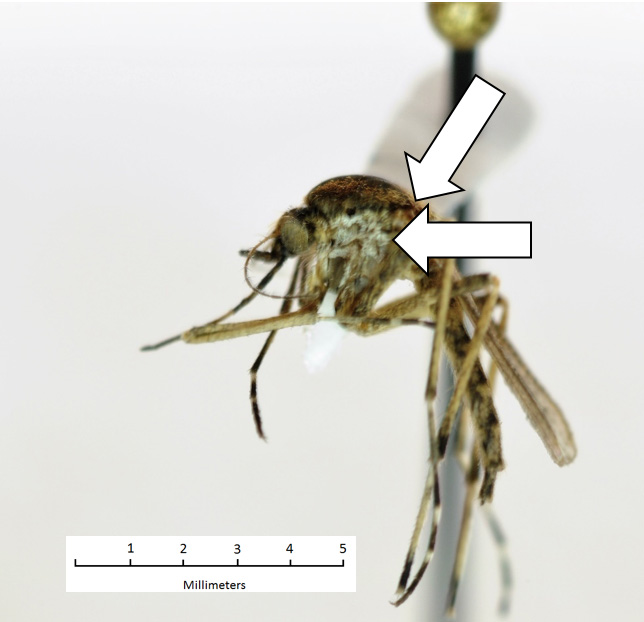 Medium to large mosquito. Distinctive markings on the thorax, which include light, cream-colored sides and a tan top separated by a black line (indicated by arrows).
Larvae develop in a variety of habitats, most importantly containers such as tires. Remove water containers for control. Also, habitat alteration by draining saline marshes has been successful on the East Coast.
Native to the U.S.
Vector of: dog heartworm and Eastern Equine encephalitis.
Areas of Florida were previously uninhabitable due to large populations of these painful biters. These mosquitoes are a vector of dog heartworm and act as bridge vectors between birds and mammals for other diseases it transmits. This species is abundant in brackish environments on the East Coast, but has recently been found in high numbers near Altus, OK. 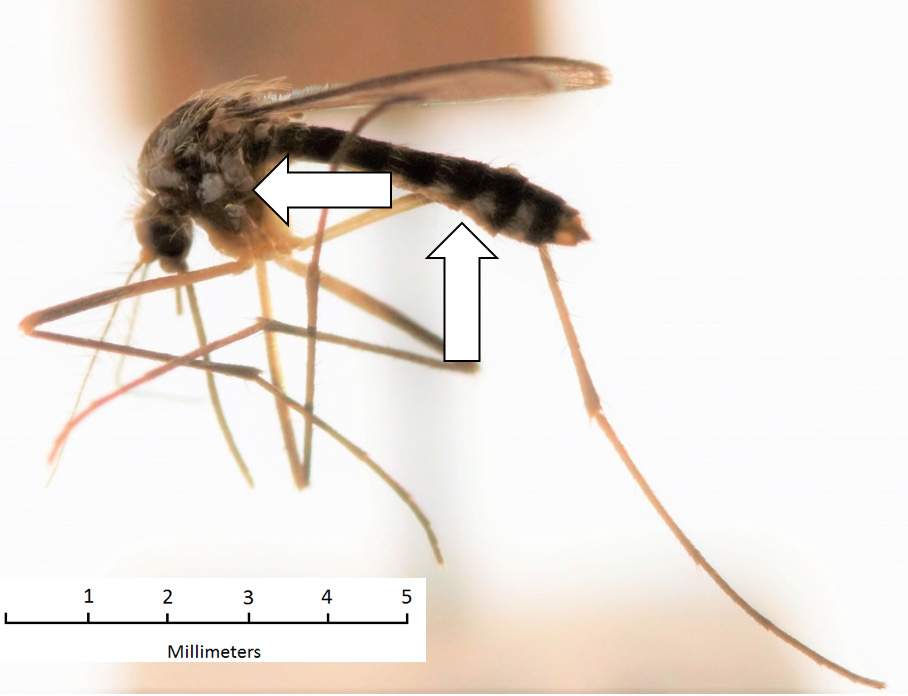 Medium mosquito with silver markings on the sides of the thorax and abdomen (indicated by arrows).
Found in containers such as tires as well as treeholes.
Vector of: La Crosse virus and suspected to carry West Nile virus.Native to the U.S.

The Eastern Treehole Mosquito is the primary vector for La Crosse virus, which has caused serious disease in humans. This is a species of concern in Europe, where it is a newly invading species. They frequently feed on small mammals and birds, and are thought to transmit West Nile virus between these two groups. They are also known to feed on white-tailed deer. It is a nuisance in areas with large amounts of tires. 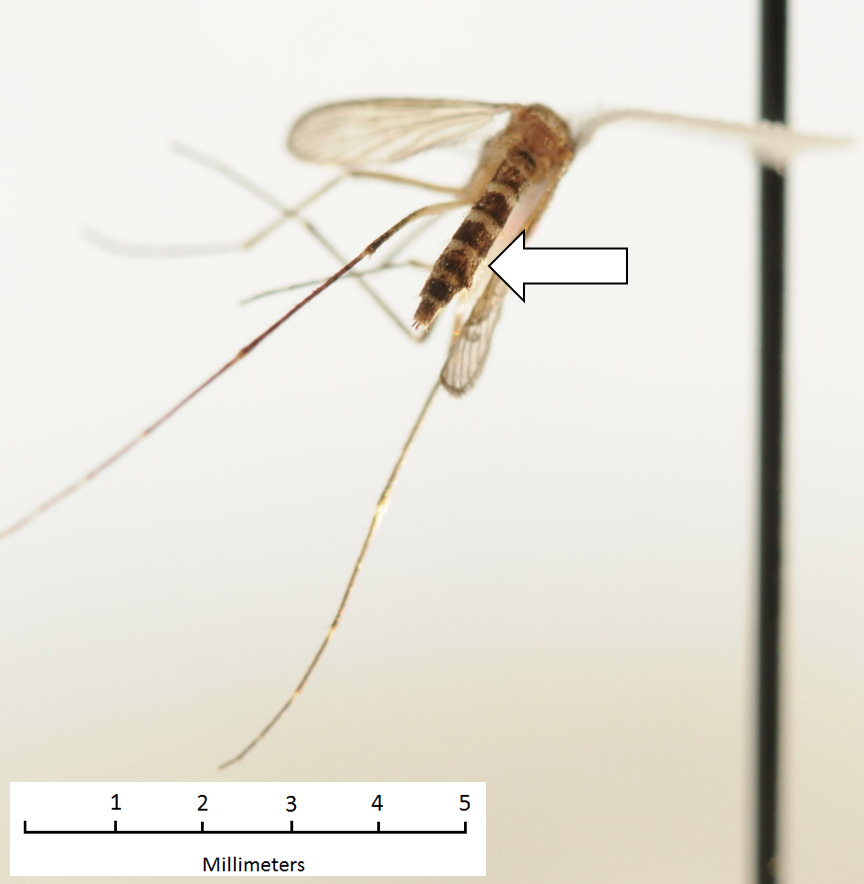 Small, dark mosquito with bands on the legs. Each segment of the abdomen has two distinct light lobed markings (indicated by arrow).
Eggs are laid on moist soil in a variety of habitats and hatch after flooding. Control is done by using larvicide on pools of water that form after rainfall.
Vector of: West Nile virus and dog heartworm.
The origin of this species is unknown.
This species has been collected on every continent except Antarctica and South America. It is a pest throughout the world, and it prefers to feed on large mammals. It is usually one of the first mosquitoes to appear in the spring. 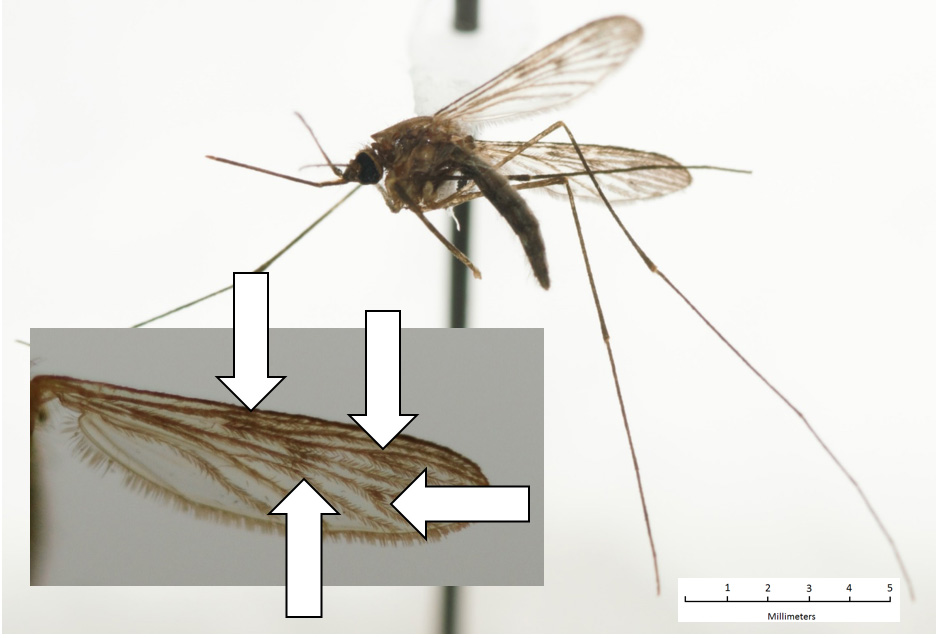 Slender mosquito with long legs. There are at least four distinct dark patches on each wing (indicated by arrows).
Larvae are found in a variety of environments, most commonly edges of ponds and lakes amid vegetation. Females overwinter in places such as barns and treeholes. Control is commonly implemented by spraying pesticides to target adults.
Native to the U.S.
Vector of: malaria and dog heartworm.
Historically, this species has been the most important malaria vector in the U.S. Fortunately, malaria has not been a large problem in the U.S. since the 1950’s. An. quadrimaculatus mostly feeds on mammals and commonly enters homes to feed on humans. 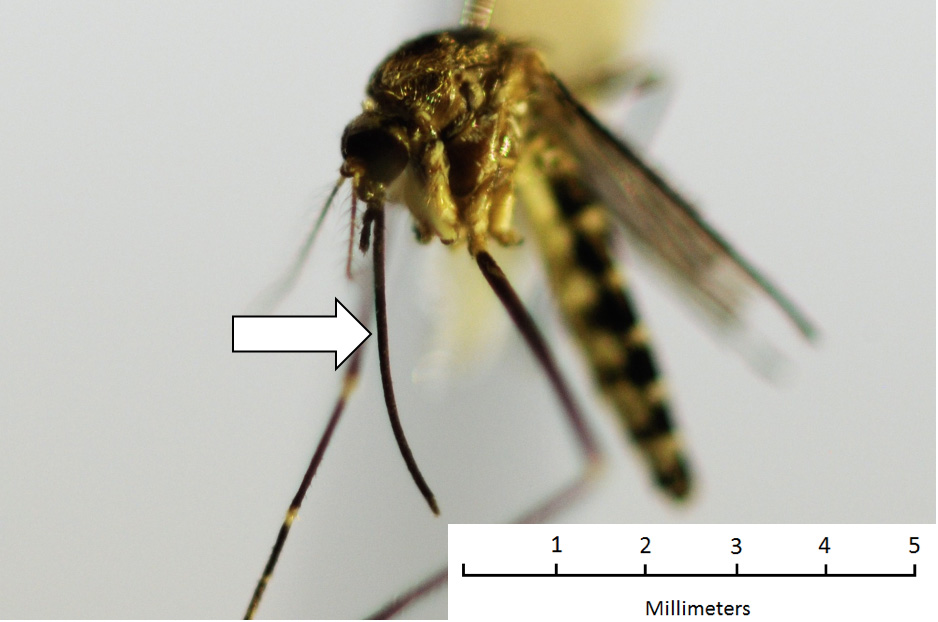 Medium to large mosquito. Looks very similar to the common Cx. tarsalis and also has white bands on the hind legs. Body is light brown with a blunt abdomen. Unlike Cx. tarsalis there is no pale band on the proboscis (indicated by arrow).
Larvae are found in a wide variety of habitats, including temporary pools and containers. It has even been found in salt marshes. Control is achieved through removal of water containers.
May be native to the U.S., but was originally described in Central America.
Vector of: West Nile virus, St. Louis encephalitis and Venezuelan equine encephalitis.
This species was originally reported to only occur in Texas, New Mexico and Arizona. It has been spreading across the U.S. and has been found in Oklahoma. It is relatively new as a pest in the U.S., and its impact on public health has not been determined. 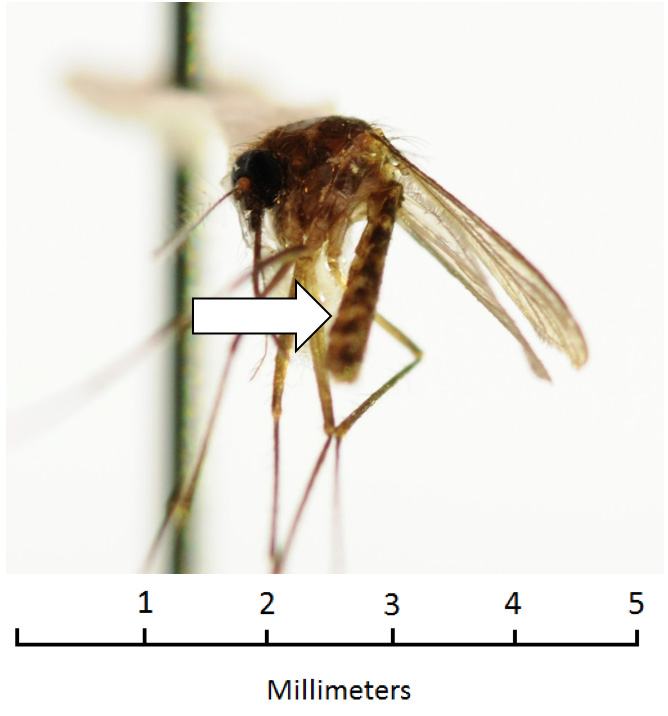 Small, dark brown mosquito with white markings on the side of each segment of the abdomen (indicated by arrow). No markings visible on dorsal part of the abdomen.
Breeds in virtually any aquatic habitat. Control is through removal of water containers and pesticide application for adults.
Native to the U.S.
Vector of: Eastern Equine encephalitis and St. Louis encephalitis.
This species is primarily found in mild coastal regions, but will expand its range to northerly areas such as Oklahoma during warm months. It cannot survive prolonged periods in temperatures below freezing. It feeds on mammals in the summer, then switches to birds in the fall. This species is a very important vector of St. Louis encephalitis. 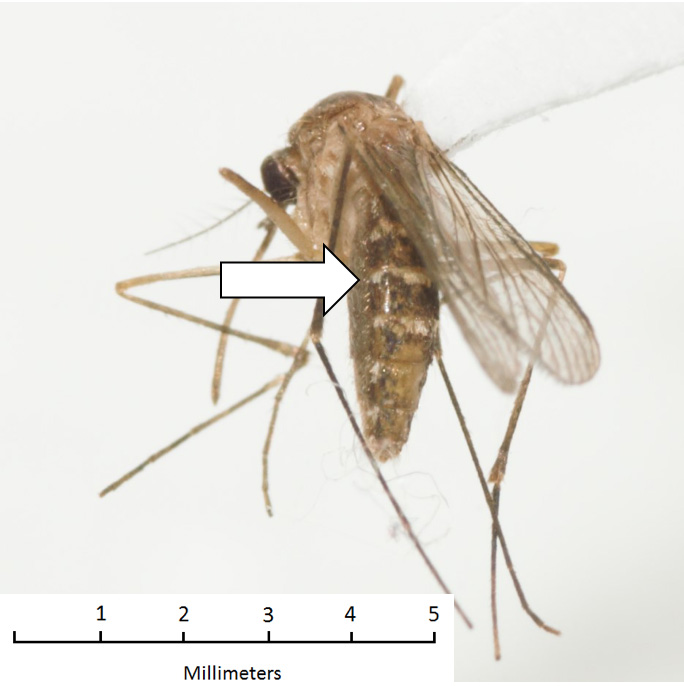 Brown mosquito with cream-colored bent line on each segment of the abdomen (indicated by arrow)
Commonly found in fouled water in containers. Removal of standing water and application of larvicides to open drainage or septic systems is done for control.
Native to Africa.
Vector of: West Nile virus, Eastern equine encephalitis, Japanese encephalitis and St. Louis encephalitis.
This species of mosquito primarily feeds on birds, but also feeds on humans and other mammals. This species is probably the most common vector of West Nile Virus. These small mosquitoes are some of the first mosquitoes to appear in spring. Larvae are commonly found in water containing sewage. 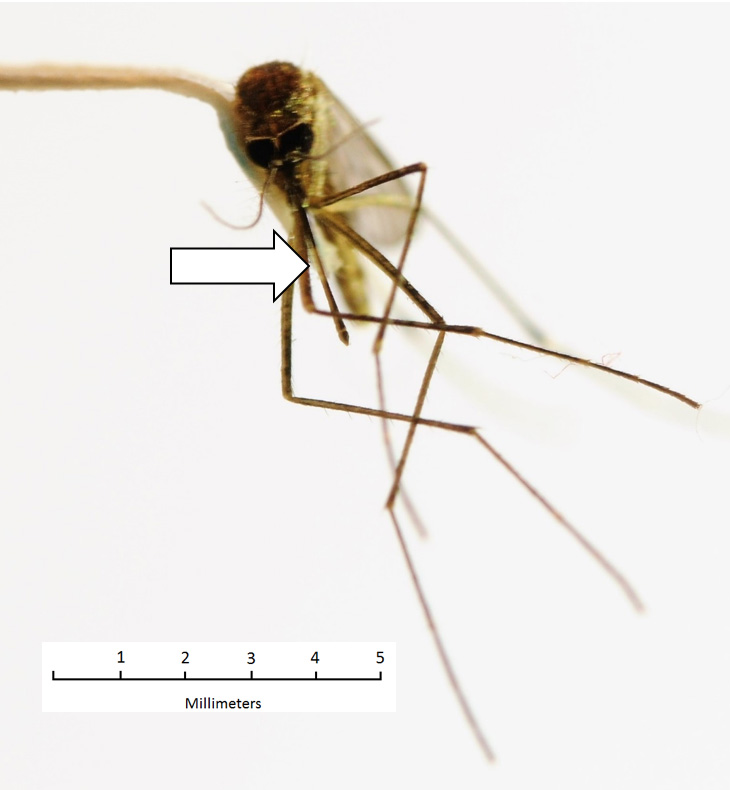 Medium brown mosquito with blunt abdomen. It has white stripes on the legs and has a single white band around its proboscis (indicated by arrow), allowing separation from Cx. coronator.
Found in standing water in grasslands, mountains and forests. Control is achieved through removal of breeding habitats (standing water) as well as applying pesticides to manage adults.
Native to the U.S.
Vector of: West Nile virus, St. Louis encephalitis and Western equine encephalitis.
A Western species that is commonly associated with grassland environments as well as at high elevations in mountainous regions. They feed on birds in the spring, then switch to mammals, including humans, in mid-summer. This is a very important vector species that often infects humans. 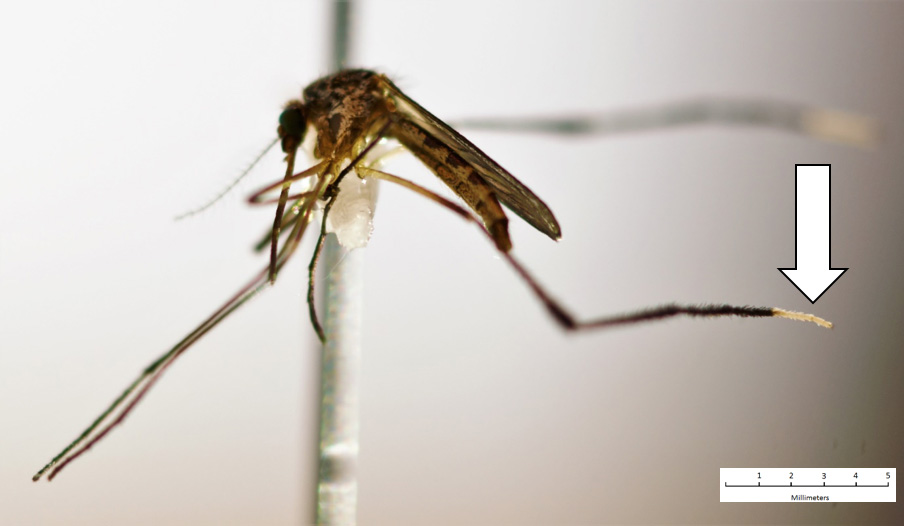 Large, dark mosquito with white bands on the legs, abdomen and one band on the proboscis (indicated by arrow). Wings are very dark.
Breeds in open fields that become flooded. Control through managing standing water and aerial application of pesticides, similar to Aedes vexans.
Native to the U.S.
Not known to transmit diseases to humans. However, it transmits Venezeulan Equine encephalitis and anaplasmosis in cattle.
This species is a very persistent and painful biter. They are known to have killed cattle due to large swarms either causing suffocation or anemia. They have a very fast life cycle, and can develop from eggs to pupae in 3.5 days in the warm summer months. 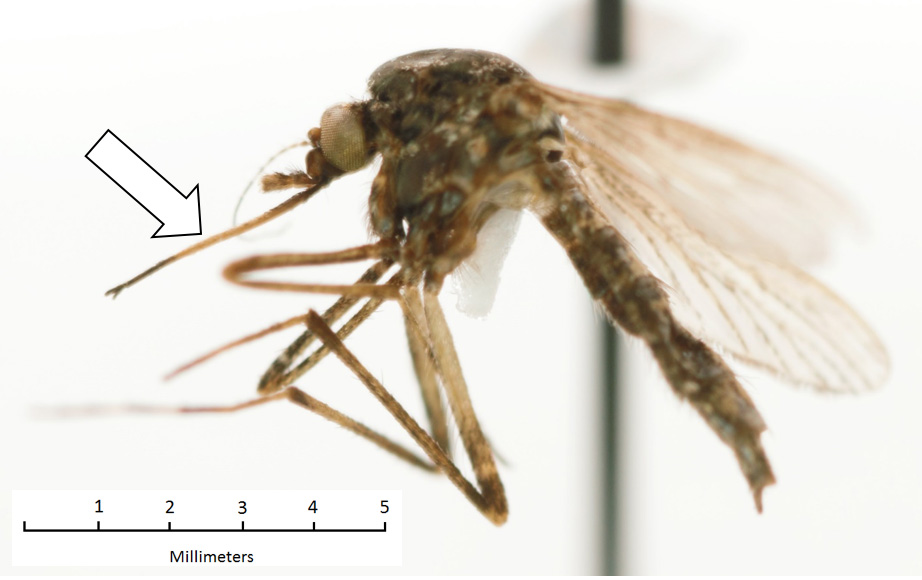 Large, dark mosquito with white tips on the hind legs (indicated by arrow).
Breeds in woodland pools, often away from urban centers. Control through managing standing water and aerial applications of pesticides, similar to Aedes vexans.
Native to the U.S.
Vector of: Venezuelan Equine encephalitis and West Nile virus.
This is a common woodland species. They are very painful and persistent biters. While they are a nuisance, they are not often encountered by humans due to living in woodland environments.

Information intended for home growers regarding concerns about pesticide residues, drift, toxicity and their application methods.