Elderberries (Sambucus canadensis L.) are native to Oklahoma and other parts of North America. The fruit of this lesser known crop is often harvested from the wild and has a variety of uses, such as making jams, jellies, pies, juice, and wine. Elderberries have significant potential health benefits, including high levels of vitamin C, iron and antioxidants.

Elderberries prefer shaded locations with good air circulation around the plants to reduce leaf and disease problems.  Soils high in organic matter are ideal, but elderberries should not be planted in poorly drained areas.

A soil test before planting is recommended.  Procedures for soil sampling and submitting samples are outlined in Fact Sheet PSS-2207, “How to Get a Good Soil Sample,” which is available through your local county Extension office or online. Apply and incorporate any phosphorous or potassium recommended from the soil test the fall before planting.

Eliminate bermudagrass, Johnsongrass and other perennial weeds by frequent cultivation or use of herbicides the season before planting. Before using any herbicide, read the label and follow all label instructions.

In the fall or early spring before planting, mix additional organic matter with the soil such as aged manure or compost.

Elderberry cultivars may be difficult to find due to rather limited demand.  One-year-old plants are best; older plants can be used but are often less vigorous.  If you wish to start your own plants from wild plants, elderberries are easily propagated from cuttings or by layering.

Elderberries can be propagated by hardwood cuttings.  In early spring before budbreak, take 10- to 12-inch cuttings from live portions of the previous season’s growth and plant them 10 to 12 inches apart in rows, leaving the top bud exposed.  Firm soil around cuttings and water as needed to retain a moist medium for rooting. Cuttings can be transplanted early the next spring.

Root cuttings of pencil diameter size, four to six inches long, may be dug in late winter before growth begins.  Place cuttings horizontally in a pot and cover with one inch of light soil or soilless medium and keep warm and moist.  A root cutting may produce two or three plants.

Spring planting is preferred for elderberries.  Planting on raised berms may help in areas where poor water drainage is a problem.  Set dormant plants as soon as they are received from the nursery, or transplant them directly from the propagation bed.  Before planting, remove damaged or broken parts and cut back the top portions to 8 to 10 inches.  Set the plant with the lowest branch at or just below the soil line and water thoroughly to settle the soil around the roots.  Watering should be done weekly if rainfall is insufficient. Elderberries should be spaced eight feet apart in rows and 10 feet apart to allow for cultivation and adequate air circulation.

Elderberries are only partially self-fruitful. Two or more cultivars should be planted near each other to provide for cross-pollination. Since wild plants will be genetically different, two or more different plants will act as pollinizers if they bloom within the same timeframe. If you have propagated plants by taking cuttings from native plants, select cuttings from several areas to ensure genetic variability.

If phosphorous and potassium were added based on a soil test, no additional phosphorous or potassium fertilizer should be needed. However, elderberries will likely require yearly applications of nitrogen. Young plants should receive one to two tablespoons of fertilizers like ammonium sulfate, ammonium nitrate, or urea annually in the spring. Older plants should receive three to four tablespoons of the same fertilizers as the young plants in the spring.  Nitrogen can also be supplied by compost or manures.

The need for fertilizers can be judged by looking at the bush. If the bush is very vigorous, producing a lot of new growth, reduce the nitrogen by half or eliminate it altogether.  If growth is moderate but the plants still appear thrifty, apply the recommended amount. If few new canes are produced and growth appears poor, increase nitrogen application by half.

Elderberries are not drought tolerant and irrigation is necessary during dry periods.  Trickle (drip) irrigation works well and mulching will also help to conserve soil moisture.

Elderberries are not competitive with weeds. Control perennial weeds before planting. After planting, shallow cultivation will help control weeds. Grasses are especially troublesome and need to be controlled.

Mulches help to suppress weeds and retain soil moisture.  There are many types of potential mulches including bark and bark chips, wood chips, sawdust, straw, and others. Apply mulches about four inches deep around the plants. When to apply the mulch is not critical, but annual observation and replenishment will be needed.  Do not mulch too deep because rodents may find it a suitable habitat.

Grasses can be planted between the rows and will let you harvest fruit following rains. Cultivate or spray with an herbicide along the grass edges to keep the grass from encroaching in the rows.

‘Nova’ – Fruit of this cultivar is large and sweet.  Plant is tall, moderately cold hardy, and very productive.  Use York as a pollinizer.  Ripens before ‘York.’

‘York’ – More productive than ‘Adams’ cultivars and as cold hardy.  Largest berry of all cultivars with good quality.  ‘York’ is a tall ornamental with white flowers, black fruit, and showy fall foliage. It ripens late in the season.

The use of native plants is also a viable option and, in some cases, may be preferable to improved cultivars.

Tomato ringspot virus is spread by nematodes and by pollen transfer.  Infected plants may seem weakened and have reduced productivity. A soil test for the presence of Xiphinema nematodes before establishing a large planting of elderberry should be done to guard against this disease.

Stem cankers are caused by many different fungi. A canker can girdle a stem, causing the tissue above the canker to die. Stressful conditions such as winter injury, drought, and flooding, are causes that lead to infection. Infected shoots should be removed and properly disposed of to prevent more infections.

Powdery mildew fungi attack elderberry, yet is not a serious problem.  All infected leaves should be removed in the fall to minimize overwintering pathogens. Root rots may occur if the soil is poorly drained. Verticillium wilt affects elderberry, so do not plant where solanaceous crops were grown in the recent past.

Because elderberries are indigenous to Oklahoma, there are several native insects that feed on them.  Although most of these have natural predators, some plant damage will occur from time to time.

Certain species of aphids feed on elderberry. Usually only a few branch tips are involved, but the feeding may result in distorted leaves. If aphids become problematic, wash them from the plants with a strong spray of water, or prune out and destroy the infested areas.

The larval stage of this insect is a large caterpillar that can feed heavily on foliage.  They are usually associated with wooded areas.  Removal and destruction by hand is an effective method of control.

The larval stage of this insect is a worm that bores into the stems and shoots.  The adult moth lays eggs in mid-summer in canes at least one year old.  Eggs hatch the following spring.  An effective control method is to prune out infested shoots and canes.  Destroy all pruned material.

Other insect pests such as sawfly larvae, stink bugs, eriophyid mite, and fall webworms may also cause problems.

In the first year after planting an elderberry, a small crop will be produced.  Production on mature plants starting in the third year can range from 12 to 15 pounds per plant, and up to 12,000 pounds per acre.  Harvest will occur from mid-August to mid-September, depending on location and cultivar.  Fruiting clusters usually ripen over a period of five to 15 days. 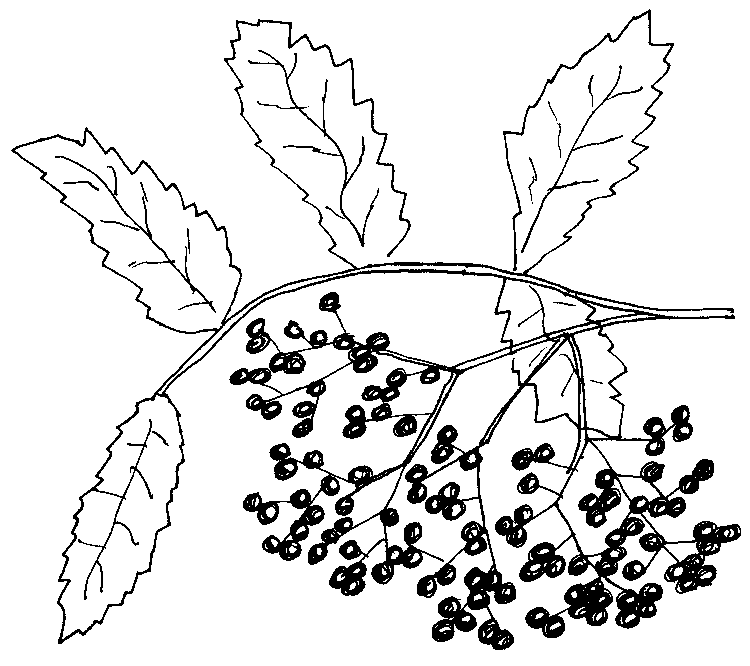 Roots, stems, leaves, and unripe fruit are somewhat toxic and should not be consumed.