Disease of Asparagus in Oklahoma

Asparagus is a well-adapted vegetable for Oklahoma and can be a valuable commercial crop in the state. Asparagus is perennial and a planting may remain productive for more than 15 years. Spear size and yield will decrease after 12 years, but a planting should produce 2,500 pounds of spears per acre. More will be produced each year during the most productive period of the planting. Site selection and soil preparation for new plantings are discussed in Extension Fact Sheet HLA-6018, Asparagus Production. Yield is dependent on the amount of nutrients (carbohydrates) stored in the root system and plant density in a field. Carbohydrates are produced by the previous season’s fern growth and move into the roots as ferns age. Therefore, maintenance of vigorous growth from harvest until fern senescence in the fall is essential for maximizing yield.

Poor vigor can be caused by several stress factors that damage ferns or weaken crowns. These include an excessively long cutting period (four weeks the first year of cutting and eight weeks thereafter is recommended), insufficient water, weed competition, inadequate soil fertility, poorly drained soil, soil compaction, defoliation from larvae of the asparagus beetle and diseases. This Fact Sheet is intended to provide asparagus producers with information necessary to identify and manage asparagus diseases of potential importance in Oklahoma.

Cercospora blight is an important foliar disease of asparagus in Oklahoma. It can be particularly severe in the eastern half of Oklahoma where rainfall and humidity levels favor infection. The fungus over-winters on fern residues left on the soil. Spores produced on this debris infect ferns after harvest, when conditions are favorable for infection. Favorable conditions include relative humidity of 95 percent or higher and average daily temperatures of 77 to 86 F. Symptoms first appear on lower portions of the ferns after row closure and periods of high humidity. Symptoms are small, oval, grey to tan lesions (spots) with reddish brown borders on the needles and small branches. Spores of the fungus are produced on the lesions and are dispersed by wind and rain. Development of the disease generally depends on rainfall and humidity levels during June to August. Browning progresses upward from the lower ferns as conditions favor spread of the disease. Entire ferns may be blighted by late July in a wet year (Figure 1). The disease results in reduced photosynthesis of affected ferns. Yield loss the following spring is a result of reduced crown vigor caused by the early defoliation. Repeated yearly defoliation by Cercospora blight weakens crowns and reduces stand productivity and longevity. First-year asparagus is rarely affected by Cercospora blight. 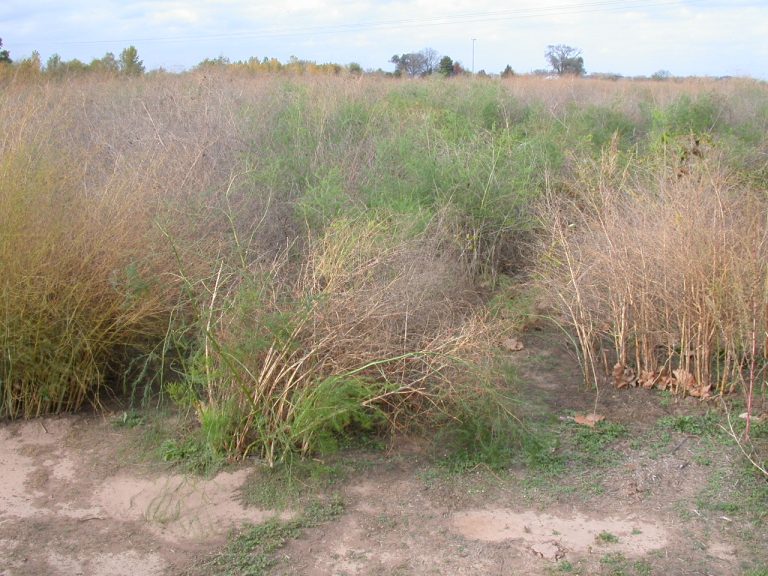 Control: An integrated approach is recommended for management of Cercospora blight. Implementation of several cultural practices will help provide partial control. Schedule overhead irrigations to allow thorough drying of the foliage before nightfall, or use drip or furrow irrigation to keep foliage dry. In eastern Oklahoma, utilization of a wider row spacing of 6 feet, rather than the usual 5, will increase air movement to dry foliage and delay canopy closure. Rows should also be planted in a north-south direction to take advantage of prevailing southerly winds in drying foliage.

Research has shown that burning, but not tillage, of infested residue in the spring delays blight appearance by about one week. However, asparagus residue left on the soil is beneficial for soil conservation, reducing abrasion of emerging spears by wind-blown sand and for maintaining organic matter content of soil.

Foliar applications of a fungicide recommended for control of Cercospora blight provide excellent control. In comparison to untreated plots, yield increases of 2,000 pounds per acre have been achieved in research plots in the harvest season following treatment the previous year with fungicide sprays. Applications should be made at three-week intervals beginning at row closure when the ferns are approximately 4 feet in height. Sprays should be applied in a sufficient volume of water to provide thorough coverage of the foliage. There are no known asparagus varieties resistant to Cercospora blight. Consult the latest edition of the E-832, Extension Agents Handbook of Insect, Plant Disease and Weed Control  for the latest list of fungicides recommended for Cercospora blight control.

Purple spot is another damaging foliar disease of asparagus in Oklahoma caused by a fungus that has sexual (Pleospora) and asexual (Stemphylium) forms. Losses from this disease are from spotting of spears, which reduces their marketability and blighting of ferns after harvest, which reduces crown productivity the following spring. The fungus overwinters on asparagus residue left on the soil where the fungus produces tiny black fruiting bodies that produce airborne spores formed as a result of sexual recombination. Spores released from the infested residue initiate the disease during spring. Symptoms appear on spears as lesions (spots) that have tan to gray centers and dark purplish borders (Figure 2). Purple spot on spears can be severe during cool, wet springs. Twelve hours of wetness is necessary for infection and the disease is more severe with abrasion from wind-blown sand. On expanded ferns after harvest, tan- to brown-colored lesions occur on branches and needles. Lesions are typically surrounded by a purple border (Figure 3) and appear similar to Cercospora blight. The presence of the black fruiting bodies of Pleospora, that appear as tiny black specks visible with the eye or a 10X hand lens are characteristic of purple spot. Spots elongate, merge together, and cause extensive foliage blight (Figure 1). The disease is typically most severe from late August through October. Blighting of foliage before natural senescence in the fall reduces the translocation of carbohydrates into the crowns. As a result, yield in the year following severe foliar blighting can be reduced by 50 percent. Residue management reduces disease development, but is not practical because tillage typically damages crowns, predisposing them to Fusarium crown and root rot. A fungicide program where applications are begun in late July and applied on 14- to 21-day intervals is effective in controlling purple spot. 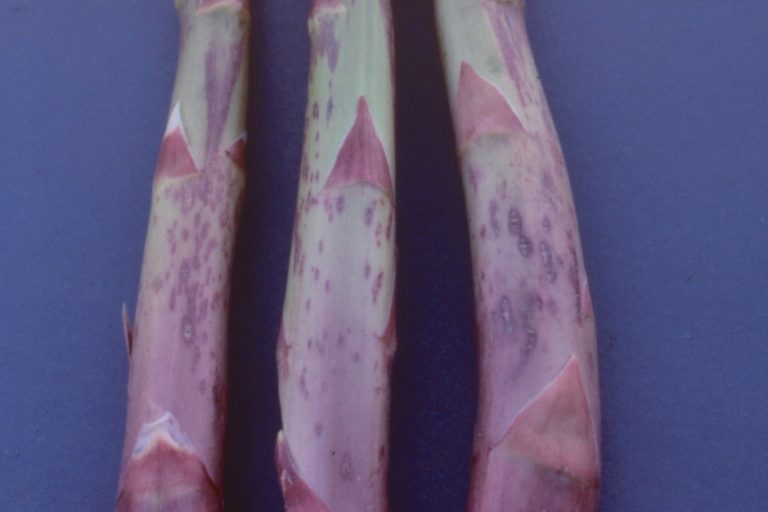 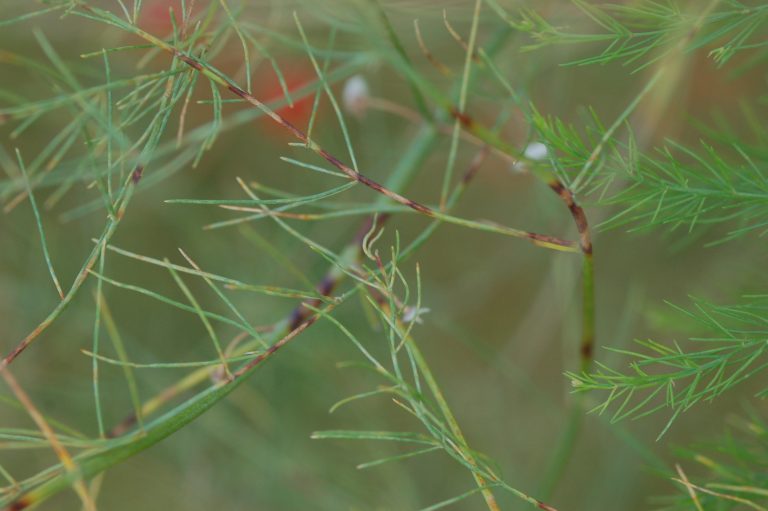 Stem, crown and root rot are caused by pathogenic strains and species of a common soilborne fungus whose populations increase in soil cropped to asparagus. Symptoms of these diseases are seedling blight and stunting, yellowing and death of plants in older plantings. Yellowing usually first appears in midsummer and on one or two ferns per plant. The bright yellow color of affected plants is in sharp contrast to remaining green and healthy plants (Figure 4). Uprooting affected plants reveals a dark, reddish-brown decay of lower stems, crowns, and roots (Figure 5). Reddish-brown internal discoloration of crowns is evident when affected crowns are split with a knife. These crowns eventually decay completely and die.

“Decline” occurs when plant density in the field is reduced and vigor of remaining plants is diminished to the extent that maintenance of the stand is no longer profitable. When an attempt  to replant affected sites is made, stand establishment is difficult and spear productivity is low. The severity of decline is increased by low soil pH, both excessive and insufficient soil moisture, high nitrogen levels and excessive cutting periods.

The fungi that cause stem, crown and root rot persist in soil indefinitely. Diseased crowns and contaminated asparagus seeds are thought to be a means of introducing this disease into clean fields. 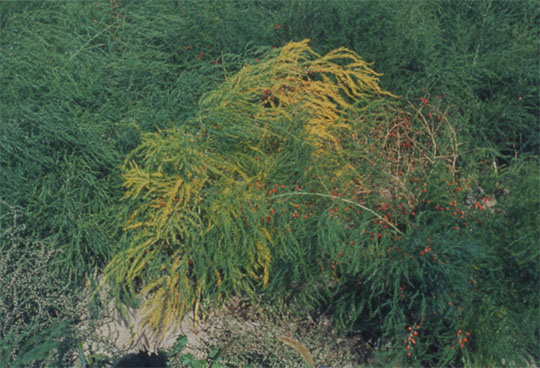 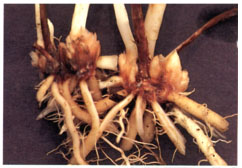 Control: Control of this disease is extremely difficult once it becomes established in a field. Therefore, measures should be taken to exclude it from fields. This is primarily done by planting healthy, vigorous crowns. For direct seeding, soak seeds in diluted chlorine bleach (1 pound of seed per gallon of a 1-part bleach/8-part water dilution) for 40 minutes, dry and apply a fungicide seed treatment before planting. Consider establishing beds with hybrid varieties that have resistance to Fusarium rather than with susceptible open-pollinated varieties. New fields should have good surface and internal water drainage and adequate nutrition provided before crowns are planted. Soil pH should be maintained between 6.5 and 7.5. Recommended pest, fertility and irrigation management practices should be implemented to keep ferns actively growing throughout the season and to minimize stress. If the disease becomes serious, the field should be rotated away from asparagus. Re-establishment of asparagus should not be attempted in fields with a history of decline problems.

Asparagus rust occurs to varying degrees wherever asparagus is grown. The fungus attacks developing ferns after cutting has been terminated. Rust may also develop on ferns allowed to develop during cutting. Rust appears first as raised, green spots (pustules) on stems and branches of developing ferns. Spores from these pustules reinfect ferns and produce brick-red pustules on stems and branches (Figure 6). A different spore type from these brick-red pustules also reinfects ferns and results in increased rust pressure. Rust is easily identified at this stage by observing the rust-colored powdery mass of spores released from these pustules when rubbed against white paper or light-colored clothing. These red pustules turn black in color as the spots age. The black color is a result of the formation of dark-colored resting spores which over-winter and are capable of initiating the disease the following year. Conditions favoring rust development are periods of prolonged heavy dew formation and dry soil.

Damage caused by rust is a result of reduced crown vigor when plants are infected several years in succession. Severe infection over several years will greatly weaken crowns to the extent that yield is reduced. 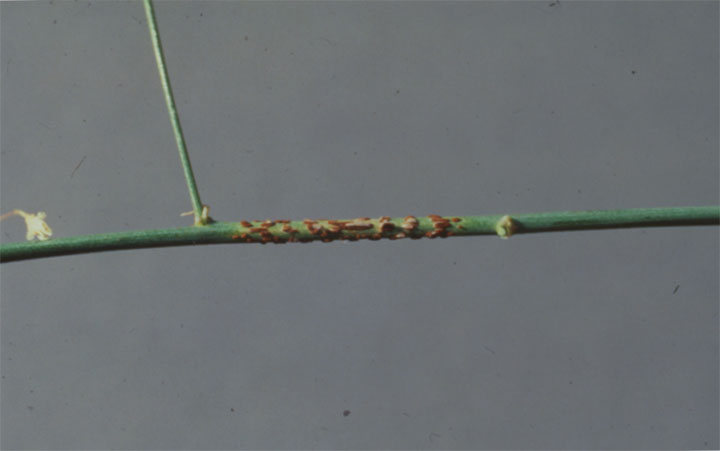 Figure 6. Brick-red pustules on a fern branch with rust.

Control: The best control measure is to plant rust-resistant varieties. Most of the newer hybrid varieties are rust resistant. If a susceptible variety is used, rows should be spaced six feet apart and oriented in a north-south direction to maximize air movement and drying down the rows. During harvest, cut all spears, fern growth and non-harvested plants to ground level or below. This will aid in breaking the disease cycle and may halt rust development. If rust appears on ferns after harvest, the fungicide spray schedule recommended for management of Cercospora blight will also provide rust control.