Gardeners understand the value of composted horse manure for improving soil fertility, tilth, and moisture holding capacity. Horse stall compost has almost a perfect proportion of nutrients to organic matter for garden crops. Horse owners should consider other reasons for composting. (1) Maintaining a compost pile reduces the volume of waste produced on the farm. (2) Composting is a clean alternative to storing manure and dirty bedding in piles. (3) The high temperatures created during composting kills fly eggs, and well-composted cleanings will not attract adult flies.

Composting is easy. There is not a complicated recipe to produce good compost from horse manure and wood shavings. Just add water and stir. The stall waste will compost on its own. Figure 1 shows the temperature and volume changes taking place in a compost pile made with stall waste from horses bedded on wood shavings.

Bacteria create the heat during the hot composting phase. Curing takes place at lower temperatures, and it is the work of fungus, worms, and other animals. Stall waste that has gone through hot composting makes good fertilizer, but the nitrogen and organic matter in cured compost are more stable than in uncured compost. Most gardeners want cured compost because adding this is like giving the garden an extra dose of fertilized soil. It takes six to eight months to produce cured compost from raw stall waste. 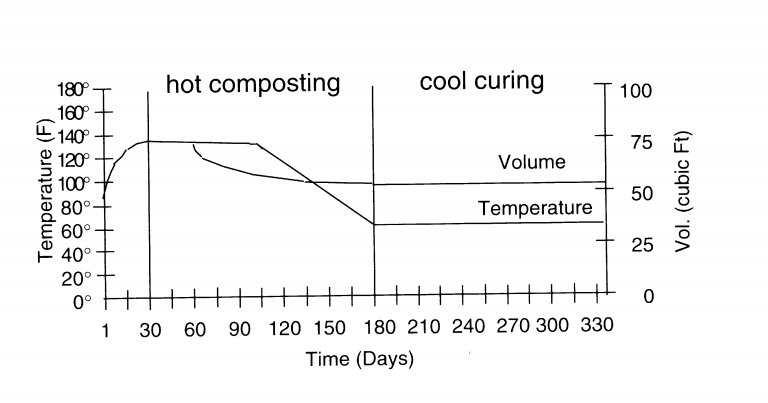 Figure 1. Temperature and volume changes in a static compost pile made with stall cleanings from horses bedded on wood shavings.

The continuous composting system developed at Oklahoma State University reduces the drudgery of making good compost. Figure 2 illustrates the concept behind the process. The idea is to keep adding fresh stall waste to a pile of hot compost. The pile grows as new material is added. The old compost in the back of the pile will cure if no new waste is added to it. After six or eight months, remove the cured compost and start adding stall waste to the backside of the hot pile.

How to build a 18′ Continuous Composting bin

How to understand the physiology, estrous period and recordkeeping practices for proper management of a mare’s reproductive cycle.

CornCropsFertilizationGrains & OilseedsIrrigationSoilWater
VIEW ALL
Back To Top
Back To Top
©