Although centipedes and millipedes are beneficial because they destroy insects and serve as recyclers by reducing decaying organic matter, many people have an aversion to them inside their homes.

Centipedes are worm-like arthropods with a flattened body and a distinct head that bears a pair of long antennae (Figure 1). Jaws containing venom glands are located on the first body segment behind the head. Centipedes, or “100-legged worms,” have only one pair of legs on each body segment. Depending on the species, centipedes can vary in length from one to 12 or more inches, with the total number of legs varying from 10 to 100 or more. The most common species of centipede found in Oklahoma is two to six inches long. Centipedes can range in color from yellowish-brown, dark brown, to iridescent reddish-green. 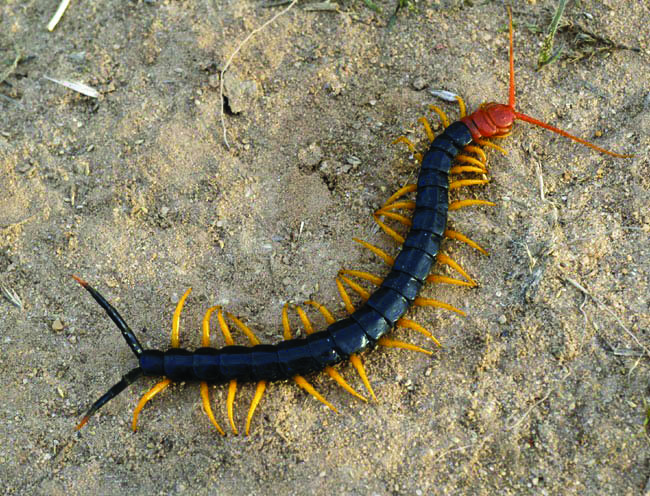 Centipedes are usually found in damp, dark areas under stones, leaf mulch, or logs. Inside homes, centipedes can be found in basements, closets, crawl spaces, or any area where other insects are found. Centipedes are active and rapid predators, feeding on just about any small arthropod; however, they do tend to prefer small insects. Centipedes hide in dark cracks and crevices during the day and search for their prey at night. After using their jaws to capture their prey, they inject a venom into the animal to kill it.

Some species of centipedes are considered venomous to humans, but their bite is not sufficiently toxic to be lethal to children or adults. A bite from any of the smaller species found in Oklahoma usually produces a moderate reaction that, at worst, is similar to a bee sting. The bite of the larger species may produce local inflammation, redness, and swelling – and occasionally systemic symptoms that disappear in four to five hours. Contrary to myth, a centipede walking on your skin will not kill the tissue or cause the skin to rot. They do, however, have relatively sharp claws on their legs that can scratch.

The house centipede is one to one and a half inches long with very long, slender antennae (Figure 2). It has a grayish-yellow body with three stripes running down the back, and each of the 15 pairs of legs is banded with white. Unlike other centipedes, house centipedes have a rounded head and pair of large, conspicuous eyes. This species is capable of hooking the plates together on the upper side of its body to hold the body straight when it runs.

Unlike most other centipedes, house centipedes are capable of reproducing inside a house and they can live both indoors and outdoors. They will often invade houses if the sub-floor areas or basements are damp. They prefer to live in dark, damp areas such as cellars, closets, and bathrooms. House centipedes lay their eggs in these same areas, as well as behind baseboards and beneath the bark of firewood brought inside the home. People will often find adults trapped in bathtubs, sinks, and toilet bowls, or see them running rapidly along walls and floors as they hunt their prey.

Millipedes are worm-like, slender, hard-shelled arthropods with rounded body segments. Millipedes differ from centipedes in that they have one pair of short antennae on the head and two pairs of legs on each body segment (Figure 3). An estimated 1,000 species of these slow-moving creatures can be found in the United States. They are commonly called “thousand leggers,” even though they may only have 60 to 400 legs. Millipede species vary in length from one to two or more inches. They also vary in color from reddish-brown to black. When dead or disturbed, millipedes tend to curl themselves into a tight coil. Although harmless, many millipedes have defensive glands that emit a foul-smelling fluid when disturbed or handled.

Most millipedes feed on damp and decaying vegetation and leaf litter, although some species will attack the roots and lower leaves of living plants. They spend most of their life in the soil. Adult millipedes spend the winter in soil, debris, and leaf litter found under trees.

Female millipedes begin to lay their eggs in the spring. It has been reported that a female millipede can produce as many as 300 eggs at one time. These eggs are laid in the soil in several small clusters of 20 to 100 eggs. In about three weeks, the eggs hatch into tiny larvae with only three pairs of legs. As millipedes grow, they molt from seven to ten times, adding additional body segments and legs with each molt. Millipedes stop growing when they reach sexual maturity. Adults may live for two to five years. It is thought that we only have one generation of millipedes per year in Oklahoma.

Millipedes occasionally wander from their moist living places into homes, but they usually die because of the dry conditions and lack of food. However, there are some occasions when millipedes invade houses in large numbers. In these cases, we often see millipedes migrating, in an uphill direction, as their food supply dwindles or their living areas become too wet or too dry. In Oklahoma, these migrations often result during drought periods following a build-up of the millipede population during favorable spring conditions. We also see millipede migrations in late spring and early fall. At times, heavy rains raise water levels in the soil and force millipedes to seek shelter. During these periods, homes in wooded areas with virtually virgin soil (soil still filled with quantities of decaying vegetation) are particularly susceptible to millipede infestation. During these migrations, millipedes often fall into swimming pools in large numbers and drown.

Millipedes are also attracted to lights, and it is common to have them migrate to lighted swimming pools, patios, driveways, or industrial areas. Even though they may invade houses, they pose no threat. They do not bite, sting, cause structural damage, contaminate foodstuffs, or eat fibers.

Centipedes and millipedes seldom need to be controlled unless they are numerous or becoming a nuisance in the home (or if millipedes are damaging plants in outdoor plantings).

You can reduce the number of house centipedes by eliminating their food sources—other house hold pests. Airing out damp places also helps. Millipedes and centipedes can be swept out or picked up with a vacuum cleaner. Seal all cracks and crevices leading inside the house to prevent centipedes or millipedes from entering. Eliminating moist hiding places around the home will kill or discourage millipedes. Outdoors, this includes removing rotting wood, decaying grass, and leaves from around the house foundation.

YESNO
Fact Sheet
Help! I Think I Have Bed Bugs

One must first be able to identify bed bug identification before learning methods to control it.

A guide to identifying, preventing and avoiding bed bugs.

Use these tips and strategies to avoid bringing bed bugs into the household when shopping second hand and what to do if they have already been brought in.

Learn how to identify bed bugs in the household and use different strategies to remove and control the pest.

Cleaning & Textile CareHome Care & SafetyHome SafetyIndoor Insects & PestsInsects, Pests, and Diseases
VIEW ALL
Back To Top
Back To Top
©