One of the greatest losses from the forested areas and landscapes in Oklahoma is the loss of a tree. Not only is a tree an aesthetic part of the landscape, but it also provides shade for humans as well as habitat for birds and other animals. In the landscape, trees can be the focal points for the entire planting. Therefore, it is tragic that a disease like Biscogniauxia (formerly Hypoxylon) canker and dieback can kill seemingly healthy trees in a very short period of time.

Although there were early records of Biscogniauxia canker and dieback on oaks (Quercus spp.) in Oklahoma, not much attention was given to its potential as an important disease of shade trees until 1979. Reports on the severity of this disease were first received from Pushmataha County in southeastern Oklahoma. A survey of several counties, and specimens received in the Plant Disease Diagnostic Laboratory, indicated that the disease was very active in at least 14 counties in the eastern and central portions of the state. It is now common throughout much of Oklahoma. Although all oak species are susceptible, the disease is more frequently observed on the red oak subgroup.  While occurrence in Oklahoma is usually documented on oaks, other species of shade trees can be affected.  Biscogniauxia canker and dieback can be found on maple (Acer spp.), hickory (Carya spp.), pecan (Carya illinoinensis), Goldenraintree (Koelreuteria paniculata) and sycamore (Platanus spp.) among other hardwoods. Although mature trees are most commonly affected, young trees may also develop Biscogniauxia canker (Figure 1).

The Biscogniauxia canker and dieback fungus is found throughout the U.S. It has been diagnosed from several habitats, including forest sites, trees in pastures, recently developed home sites and established residential areas. In one case in Oklahoma, the severity of the disease eliminated 15 acres of established oak trees surrounding a recently built home. In another case, it eliminated six acres of oaks in the central area of a condominium development.

In Oklahoma, Biscogniauxia canker and dieback is reportedly caused by Biscogniauxia atropunctata (formerly Hypoxylon atropunctatum) and other Biscogniauxia spp. Biscogniauxia canker and dieback is a disease of stressed trees. The fungus colonizes healthy trees and lives in the bark and sapwood for an indefinite period of time without causing damage. In healthy trees, natural defenses are typically present that prevent the fungus from causing disease. When the tree becomes stressed, its defenses are reduced and the tree can no longer resist the fungus. Stress factors include drought, heat, root damage, chemical injury and other diseases. Trees that are attacked by defoliating insects are also more likely to develop Biscogniauxia dieback. The most common stress factors in Oklahoma are drought and heat.  The causal fungi are favored by warm and dry conditions.  In fact, B. atropunctata can grow at temperatures up to 104 F and grows optimally at 95 F.

The fungus invades stressed trees through wounds. Early symptoms may appear as yellowing and wilting of leaves. The leaves will turn brown and the tops of branches are killed during the dieback phase of the disease. This phase may go unnoticed or may be attributed to other problems. The disease will progress down to the trunk and cause a girdling canker, which kills the entire crown. At this point of the disease cycle, the entire tree will turn brown seemingly overnight (although girdling of the trunk actually takes several weeks to months).  Internally, the fungus causes a brown discoloration of the sapwood.  Subsequently, a yellow decay with black zone lines will develop.

When the diseased branches or trunk die, the fungus will form a cushion-like mat under the bark called a stroma (Figure 2). As the stroma develops, it exerts pressure between the wood and bark of the tree. Eventually, the pressure causes the bark to slough off the tree, revealing the stroma. At first, the stroma appears white to brown (Figure 3) and is covered by dusty asexual spores (conidia) of the fungus, which are easily blown to nearby trees. Later, the stroma becomes gray to black in color as the structures of the sexual stage are produced (Figure 4). An older stroma may be completely black in color. Spores are wind-blown, rain-splashed or carried by animals to nearby trees. 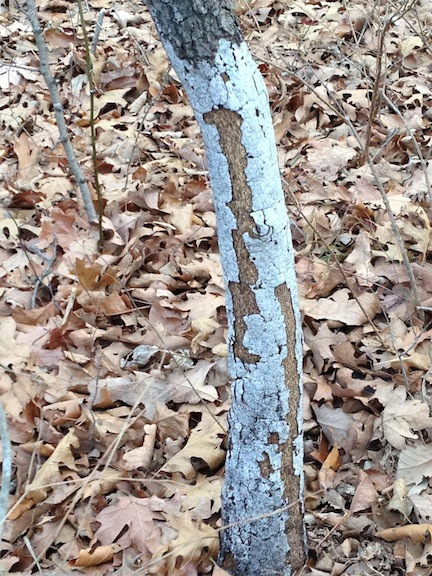 Figure 1: Canopy dieback in a mature oak tree as a result of Biscongiauxia canker and dieback 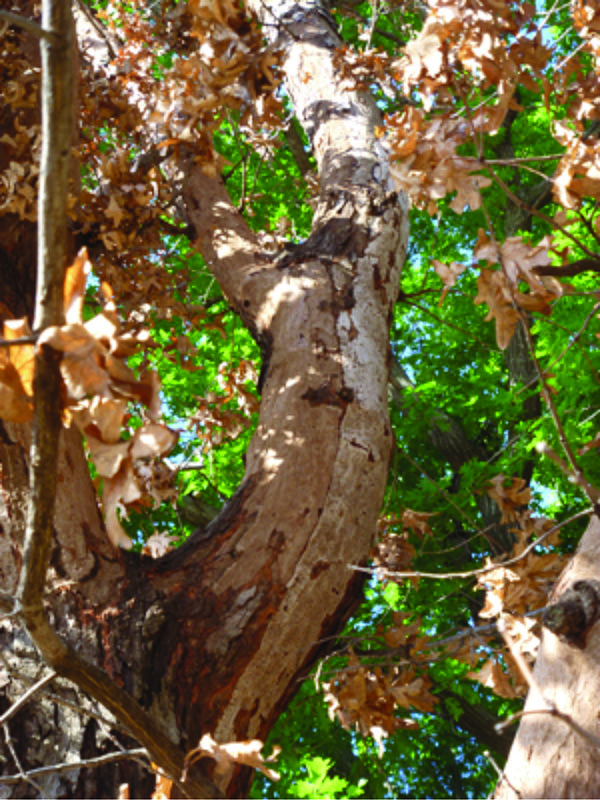 Figure 2:  An exposed stroma caused by a species of Biscogniauxia on a scaffold limb of an oak tree 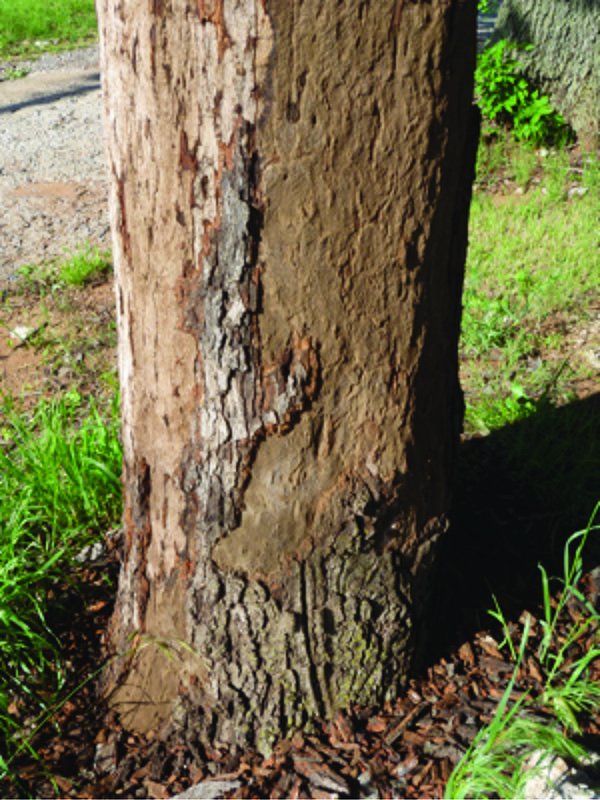 Figure 3: An exposed stroma caused by a species of Biscogniauxia. Note the presence of bark around the base of the tree as a result of the formation of the stroma. 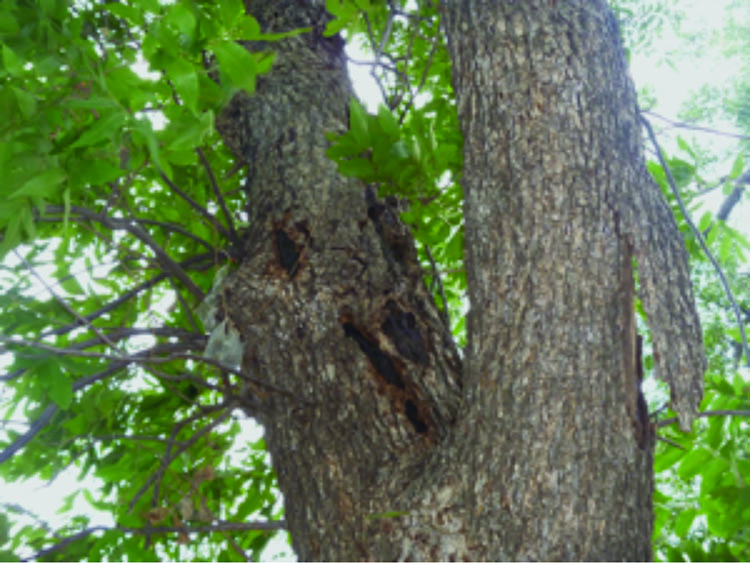 Trees with Biscogniauxia canker are generally beyond repair, particularly if the fungal stroma is visible on the trunk. The fungus causes internal wood decay and infected trees may be unstable. There are no chemicals registered to treat Biscogniauxia canker and dieback of trees. In a commercial operation, where trees can be harvested for wood or pulp, it is recommended that trees be cut before decay reduces their value.

In a home setting, individual trees that have more than 15 percent of the crown area infected should be cut to ground level and burned. Trees with less damage should be given extra care, such as watering during periods of drought, providing adequate fertilization and preventing damage to trunks or roots. Infected branches should be removed by pruning and destroyed. The fungus remains active on dead wood, producing numerous spores.  Destroy diseased wood to reduce spore load in local areas. This lessens the likelihood that healthy trees near infested wood will become infected, however these trees may still become infected by wind-blown spores from other sources.

There is no cure for Biscogniauxia canker and dieback. Therefore the best defense is to maintain trees in a healthy and vigorous growing condition by adequate fertilization and by providing adequate water throughout the year. Avoid wounding trees and prune out dead wood and declining limbs as they appear.

Bees & Beneficial InsectsHoneybeesInsects, Pests, and DiseasesLivestock
VIEW ALL
Back To Top
Back To Top
©