Harmful algal blooms (HABs) are created by unhealthy conditions in lakes and rivers. While algae are a normal part of any body of water, occasionally the amount of algae can grow so large that it becomes visible to the eye. This leads to algal blooms that can cause the water to become green in color (Figure 1), although other colors are possible. HABs are usually a problem because of the unpleasant odors they release and the scum they leave on the shore, although they can sometimes produce toxins, causing discomfort and sickness in people. 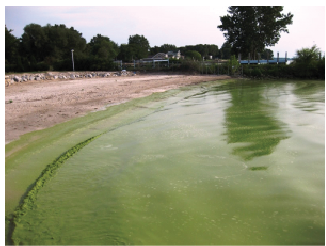 Nationally, the intensity and frequency of harmful blue-green algal blooms (HABs) has been increasing. In the state of Oklahoma, there has been at least one recorded HAB every year since at least 1998. Due to unseasonably high temperatures, 2011 was an especially bad year for severe algal blooms (Figure 2). Certain lakes appear more likely to have HABs. For example, HABs occur frequently in parts of Lake Texoma. However, none of these blooms have resulted in any recorded instances of human health impacts (GCHD 2013). There has not been any reported serious human illnesses caused by contact with HABs. However, there have been several animal deaths attributed to HAB outbreaks. Information about the water conditions at lakes in Oklahoma can be found on the TravelOK website. 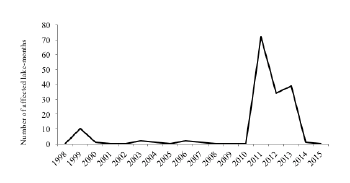 While the health risks of algal blooms may be low, blooms are still costly for local communities. It is estimated the annual direct expenditure cost of HABs in the U.S. is $64 million, due to the need for additional drinking water treatment, loss of recreational water usage and declines in waterfront real estate values (NOAA 2016). In August 2014, local officials in Toledo, Ohio, banned the use of drinking water supplied to more than 400,000 residents after it had been contaminated by an algal bloom in Lake Erie. However, the impacts often are not measured in terms of monetary effects. For example, in 2013, an algal bloom wiped out the fishery at Altus-Lugert Lake; although the fishery is recovering, for several years this important resource has been gone. The loss of fisheries to HABS has real economic impacts, but with no price on sportfish, the loss can be difficult to measure.

The Impacts of Algal Bloom Warnings

Severe HAB events and associated advisories or warnings can impact local economies that rely on water-based tourism and recreation. A 2015 survey of visitors at Grand Lake O’ The Cherokees confirmed that warnings are disruptive to trip planning. When asked if they would have made their current trip to the lake if a “no bodily contact” warning was issued just prior to visiting, 25 percent of visitors said they would not have made the trip. Of those who would not, nearly 20 percent indicated they would not make up the trip at a later date.

Clearly, people do not like HABs when it comes to recreation, and are willing to pay to avoid them, even if it means they do not have to change their travel plans. A 2005 survey of campers at Lake Tenkiller found those who swim and boat on the lake were willing to pay $13 per trip per person for assurances there would be no algal blooms during their trip (Roberts 2008).

A recent study of Oklahoma state parks with lake access found a negative association between BGA warnings and visitation (Daniels and Melstrom). Parks experienced an average decline in visitation of about 19 percent at lakes in the month of a BGA warning, which is equivalent to about 5,500 people deciding not to visit. There is much variability in the observed impacts of BGA warnings on visitation. In general, decreased visitation due to BGA warnings increases the risk local tourism and hospitality businesses will be negatively affected by these events due to lost revenue. It is estimated that the 2011 BGA warnings at Lake Texoma resulted in $45 million of lost sales related to tourism (GCHD 2013) which means  about 8 percent of all annual revenue generated by Lake Texoma was lost, or in other words, a little less than the equivalent of losing one month of tourism business at the lake (LTA 2013).

Even when the impact to local economies is small, the ecological costs of algal blooms can be significant and lasting effects. The destruction of entire fisheries by algal blooms is an infrequent example, but the experience of Altus-Lugert Lake shows that it can happen in Oklahoma. Fishing is a major outdoor recreational activity, and the damage to anglers from loss of fishing opportunities can be large. Suppose the lake were deemed unsuitable for all fishing due to an algal bloom. If an angler’s preferred fishing lake were closed, they would have to be paid upwards of $60 on average to be just as well off as if the lake remained open to fishing, according to a recent study (Melstrom et al. 2015). A mid-sized lake in Oklahoma is visited about 30,000 times per year for fishing, so losing all fishing at a lake like Altus-Lugert to an algal bloom results in a lost value to anglers of perhaps $180,000 per year, without even considering lost sales to local businesses. The larger the lake, the larger the potential damages: for example, it is estimated that the economic value of impacts to recreational fishing from the severe 2011 HAB event on Lake Erie was worth $2.4 million in Ohio (IJC 2014).

In conclusion, the number of algal bloom events has been at historic highs in recent years as shown by the spike of upwards of 90 warnings in 2011 (Figure 2). Although these events reflect serious nutrient problems in lakes, human health complications due to bodily contact are very rare and difficult for public agencies to quantify. Nevertheless, these large algal bloom events are a costly nuisance and can have important economic impacts and damage valuable aquatic resources, such as fisheries. Given the expectation that over the coming decades average temperatures will rise and average precipitation conditions will be slightly drier in Oklahoma, the conditions that contributed to the spike in algal blooms observed in 2011 are likely to be repeated. We should therefore expect the number of algal bloom events to continue to climb, unless nutrient runoff into lakes is reduced by investing in better land management practices. 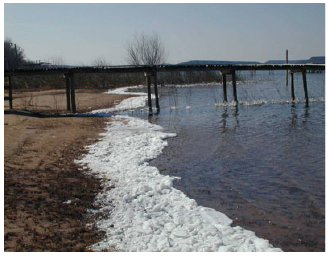 Figure 3. Foam is characteristic of golden alga bloom when water is agitated. Golden algae typically bloom in the winter, when conditions are not favorable for other kinds algae. Photo credit: Texas Parks and Wildlife.

Learn about why your pond is experiencing fish kills and how to determine the issue specific to your pond.

Information to assist with aquatic weed management and the steps to solve the weed problem.

Learn the results of a survey about common pond problems.