Update on Insect Pests in Alfalfa

Degree day numbers have surpassed 500 in the southern half of the state (Fig. 1). Based on a “normal” season, numbers in this range would indicate that we should be seeing 1st to 2nd instar development and signs of early damage. If not already doing so, scouting is recommended. Recent weather events have created varying levels of weevil development. Early season egg hatch may have been affected by extreme cold temperatures, however, as temperatures and adult activity start to increase, alfalfa weevil populations will as well.

Based on scouting reports from the Tillman and Grady County areas, it appears that weevil populations are on the rise (35 larvae/30 stems) with most being first instar. Normally, application decisions are made based on plant height, degree days, and number of larvae (EPP, CR-7177, Scouting for the Alfalfa Weevil in Oklahoma). Due to lack of moisture and minimal plant growth since breaking dormancy, spray decisions may need to be made soon. Small plants may already be showing signs of stunting and leaf defoliation. Larval numbers, even if appearing low, can create a significant threat to alfalfa plants with minimal growth (Fig. 2). 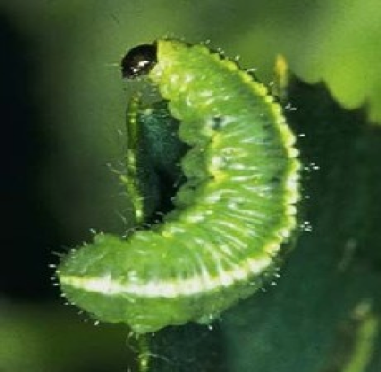 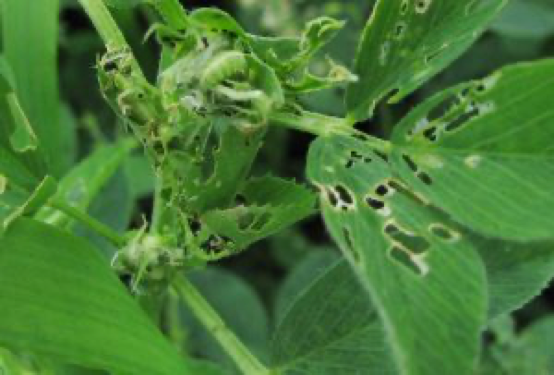 While scouting alfalfa fields in the Central part of the state, I have observed various levels of cowpea aphid occurrence (Fig. 3). Though not widespread in most fields, some plants are showing signs of increased pressure with more than 10 aphids/stem. As temperatures continue to climb in the coming days conditions for a sustained increase in population may develop. 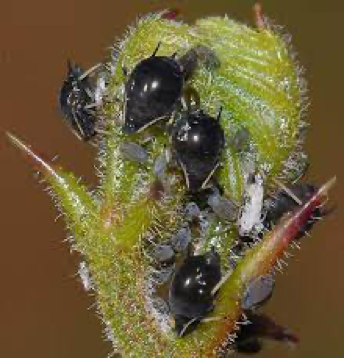 Feeding by this insect can be detrimental to seedling stands. In established stands, individual plants which may already be stunted from lack of moisture and poor growing conditions can quickly take on a bushy appearance, begin to turn somewhat bluer in color, and succumb to the large numbers of cowpea aphids feeding on the plants. They tend to feed in clusters on newly emerging leaves, blooms, and stems and may be sporadic throughout the field. They secrete large quantities of honeydew, which can result in the formation of sooty mold on the plant, further disrupting photosynthesis (Fig. 4).

Thresholds are similar to those used for pea aphid infestations. Heavy cowpea aphid populations generally occur when alfalfa is exposed to poor growing conditions. If these conditions persist, plants may take longer to rebound from the high numbers.

Treatment considerations should be based on the number of aphids per stem. On established alfalfa, that has 10 inches of growth, up to 50 aphids per stem can be sustained before treatment is needed. Most of the plants I’m seeing currently have about 3-4 inches of growth. If plants are heavily stressed from lack of moisture and minimal growth, treatment may be required.