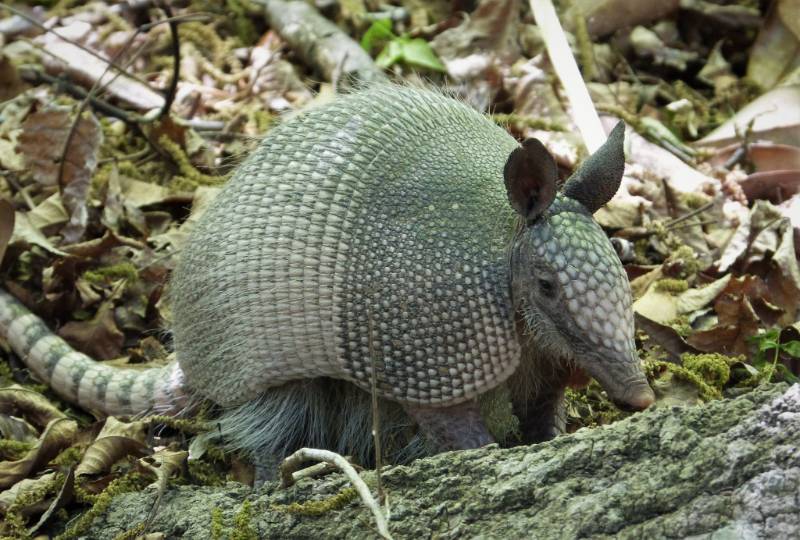 One of the most common wildlife damage complaints during the summer months concerns armadillos. Armadillos usually cause problems during the late hours of the night as they dig for insects and larvae in lawns.

Armadillos may be active year around, but they are most active during the warmer months of the year. During the heat of the summer, homeowners begin irrigating their lawns. This makes lawns especially attractive to the armadillo. The lawns are usually mowed and thus there is little vegetation to impede foraging. Additionally, the irrigation results in the soil being loose and easy to dig. Finally, the irrigation often keeps larval insects close to the soil surface.

Once armadillos find a suitable foraging spot, they normally will return repeatedly. Many times the damage is only superficial as the holes are seldom more than a few inches in depth. In the case of sod forming turf such as Bermuda, the damage is typically repaired by the turf rather quickly. In the case of cool season grasses such as fescue, the damage is more long-term.

While exclusion fences or other barriers may provide relief for small garden beds, lawns are normally too large for this to be a viable option. Modification of the habitat, such as removal of ground vegetation can work. But this is usually not a good solution for most residences as the vegetation is likely ornamental. If possible, the homeowner might consider decreasing irrigation of their lawn to attempt to interrupt the foraging cycle of the armadillo. This will sometimes provide relief and may work for drought tolerant lawns.

There are no known repellants that are effective for armadillos. Soil insecticides for grubs are promoted to reduce the food source for the armadillo. However, this is a poor practice unless you have a serious grub problem as you will be eliminating many beneficial insects and other soil dwelling creatures in the process. Shooting is very effective, but limited by local ordinances within city limits. Thus, trapping is the primary method of control in many situations.

Fortunately, armadillos can be trapped. The first step is to identify what areas of the lawn are being most visited by the animal(s). A live catch trap measuring 10” x 12” x 32” should be set in that area. No bait is needed, but funnels can be used to direct the animal into the trap. You can make a funnel by setting a 1x6 or larger board on its edge and directs the animal to the trap.  They have very poor eyesight and once they bump into the board, they will either go left or right hopefully towards your live trap.  You might also use natural barriers such as fences or landscape materials as a funnel.  Close the traps during the day to help avoid catching pets and other wildlife.  Set them at dusk and check the traps early in the morning for armadillos.

In Oklahoma, armadillos may be controlled all year without a special permit. Do not handle the armadillo once caught as they can become infected with the bacteria that causes leprosy. Once caught the animal can be humanly euthanize or released into a suitable area with permission of the landowner.