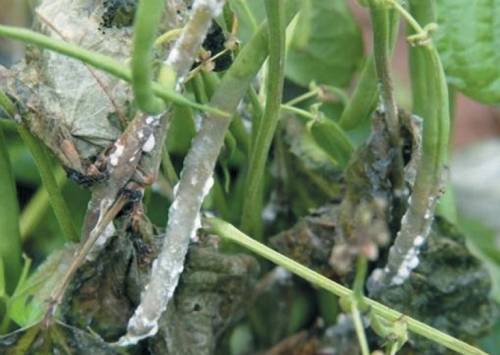 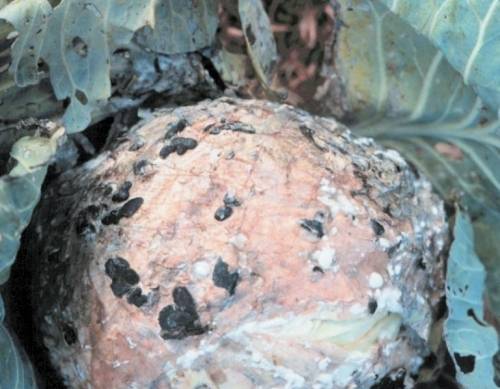 Early symptoms include wilting and yellowing of lower leaves. The plants appear limp and white, cottony fungal growth may be present on the basal plant surfaces. Black structures called sclerotia may be observed within the cottony growth. The sclerotia of S. minor are small and measure 1/16 to 1/8 inch in diameter. Sclerotia of S. sclerotiorum are much larger (up to ½ inch) and are irregularly shaped. The disease is favored by cool and moist weather.

The two pathogens have different lifecycles which is important because it determines where the inoculums (spores) may be coming from. The sclerotia of S. minor directly infect plants and cause disease. In contrast, the sclerotia of S. sclerotiorum rarely infect a plant directly. Rather, they produce small (1/16 to 1/8 inch) mushroom-like fruiting structures at the soil surface. These structures are called apothecia and they produce ascospores which are ejected and can be blown on wind currents. The ascospores can survive for up to 2 weeks before initiating an infection. The ascospores invade plants through dead or dying tissue, such as senescing lower leaves. Diseases caused by S. sclerotiorum may be more difficult to manage because the ascospores may be coming from the soil in the field or blown on wind currents from locations outside the field.

Do not plant seed that may be contaminated with sclerotia. This is more common on seeds or pods that contact the soil or are underground such as peanut seeds. Do not plant susceptible plants in contaminated fields. Crops should be rotated to non-hosts. Sclerotia are viable for 2-3 years or longer in the soil. When selecting varieties, use those with a more upright growth habit and an open crop canopy as opposed to a sprawling or prostrate type growth habit.

The disease is favored by wet and humid conditions. Growers should keep planting beds as dry as possible. A level planting bed is desired because this will help evenly distribute water. Improve drainage if possible. Irrigate in the morning which promotes drying of the soil surface and foliage.

Avoid excess fertilization with nitrogen. The application of nitrogen promotes foliar growth and a dense canopy. Plants in these conditions are more likely to suffer from mold problems.

Plowing can be helpful in burying the sclerotia preferably 10 or more inches deep. Sclerotia that are buried deeply generally will not germinate and are often destroyed by microorganisms. This method is more effective with S. minor than S. sclerotiorum.

If the problem is identified as caused by S. sclerotiorum, ascospores may be blowing in from nearby fields or weedy areas. Controlling weedy hosts can sometimes be beneficial at reducing the number of spores blowing in.

There has been some research with biologicial control agents for control of Sclerotinia species. Commercial formulations of the fungus Coniothyrium minitans have shown some success in reducing the level of S. sclerotiorum in fields. The product is applied pre-plant and biological control agents should be used in combination with other control strategies to be effective.