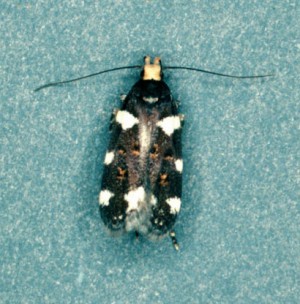 In Oklahoma this insect often causes severe damage to the foliage of redbuds. The characteristic injury is folding the edge of the leaf onto the upper surface and fastening it down with strands of silk. Where the infestation is heavy there may be from two to four folded areas on a leaf. Leaves may also be tied to each other or to nearby surfaces. In the folded areas the larvae feed on the upper surface layer of the leaf. This brings about the drying out of the leaf and it turns brown. When the damage is severe the leaves die and drop from the trees. 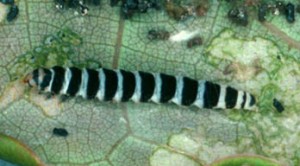 The redbud leaffolder overwinters as a pupa attached to a fallen leaf. They may become detached from the leaf and come to rest in debris or on the surface of the soil. Adults emerge in late April and early May and lay eggs on the leaves near the veins during May. The first generation continues through June. Second and third generation eggs are laid in a thin web in a folded leaf. The second generation occurs in late July and August and the third in September and early October. The third generation overlaps the second in the fall. During rainy weather a fungus disease sometimes attacks and kills the larvae. 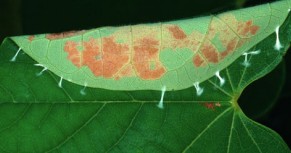 The adult is a small moth with dark brown wings which have 10 small white spots. The head and collar are also white. It is slightly over 1/4 inch long and has a wingspread of about 1/2 inch. The eggs are oval, white, and very small. Small larvae are white but during the latter part of the next to last instar dark alternating cross bands appear. The mature larva has alternating white and black bands and is about 1/2 inch long. The dark brown pupa is held to a leaf by a sparse, loosely made web.