Spring Dead Spot (SDS) is a common disease of bermudagrass, but rarely of buffalograss or zoysiagrass in Oklahoma.  Spring dead spot primarily occurs in highly managed residential, commercial, and recreational bermudagrass lawns.  Lawns that are seldom fertilized, irrigated, and receive herbicide treatments are less likely to develop severe levels of SDS.  In Oklahoma, SDS is most noticeable in spring and into the early summer as bermudagrass breaks dormancy.  New symptoms of SDS do not appear in growing stands of bermudagrass in mid-to-late summer or fall in Oklahoma.

Affected areas may range from inches to many yards in length or diameter (Figures 1 and 2).  The turf in affected areas will be dead and bleached white in color (Figure 1). Large circular, semi-circular, or arcs of dead turf can be present (Figure 3). Patches are perennial and year to year some areas may expand in size or other areas may diminish or disappear.  Affected plant parts, such as rhizomes, crowns, roots, or stolons are dark black and rotted when removed from the soil (Figures 4 and 5).  As the patches expand and more dead area develop, weed growth within the patches during spring and summer months is common (Figure 6) and may require the use of pre- or post- emergent herbicides. 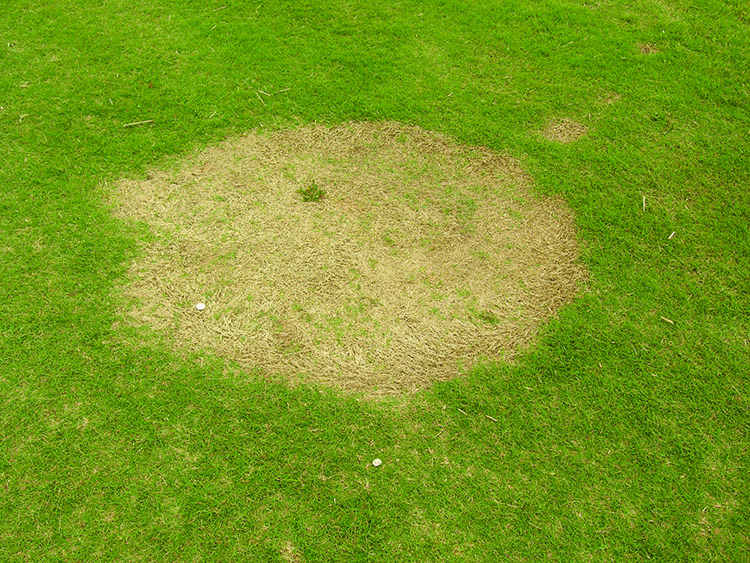 Figure 1. Spring dead spot symptoms on bermudagrass. Note the bleached color of the dead plants inside the patch. 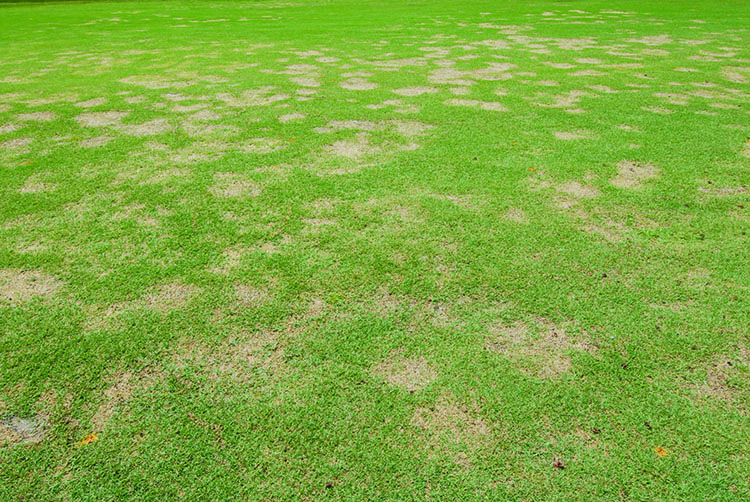 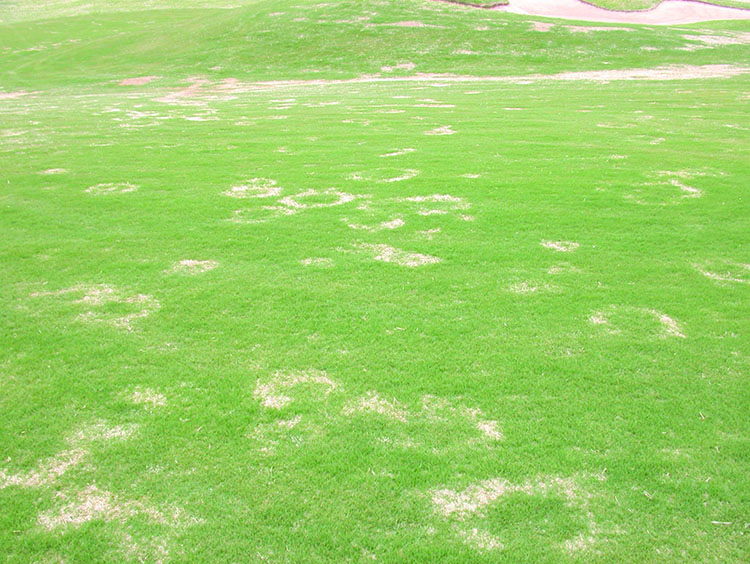 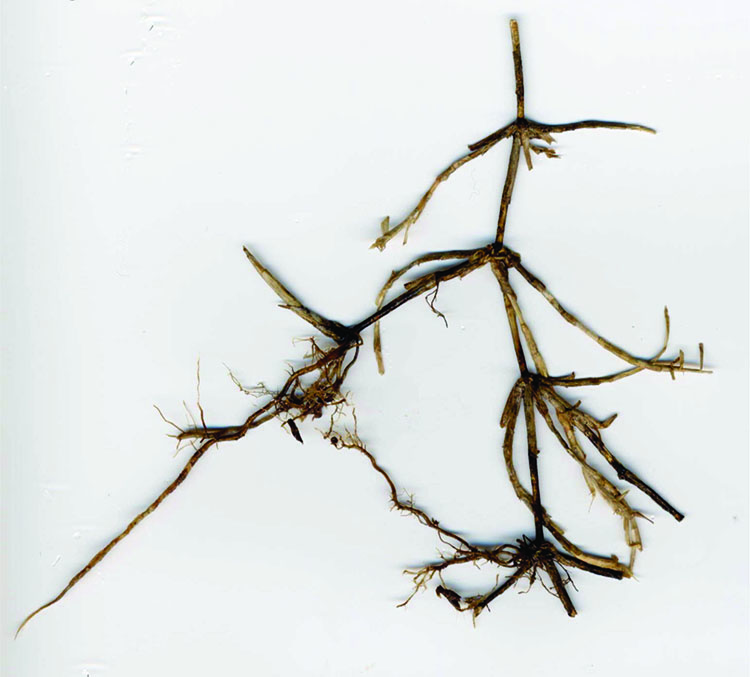 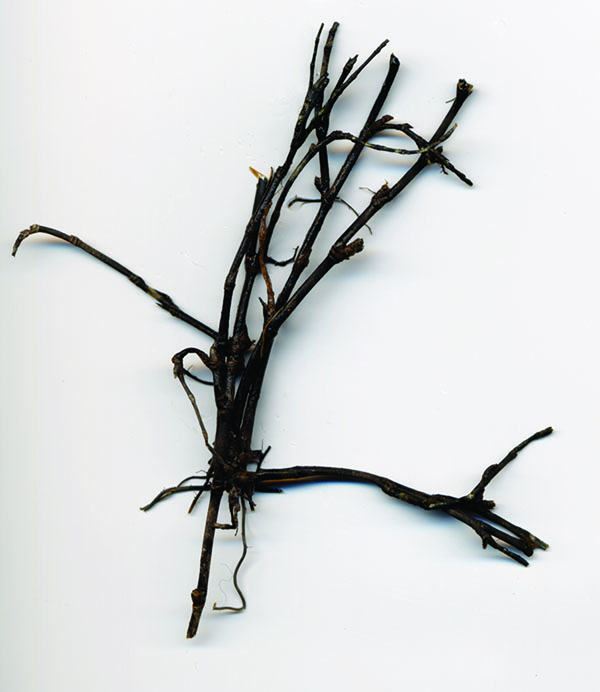 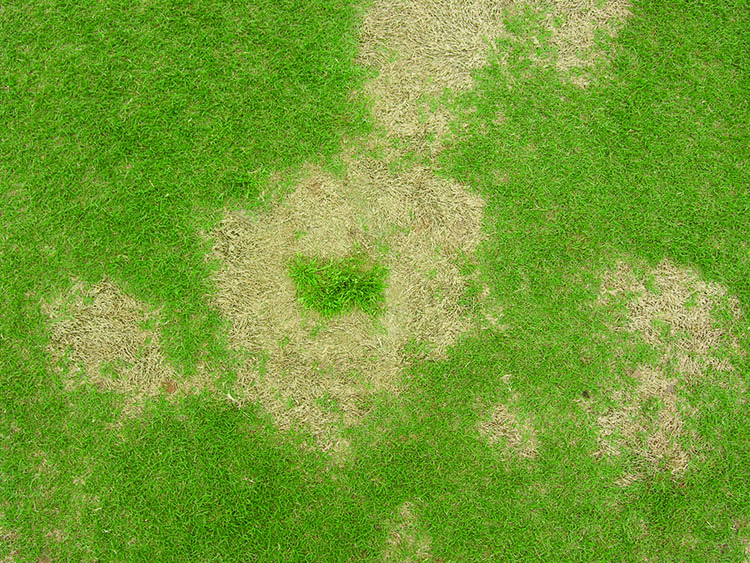 Two fungi, Ophiosphaerella herpotricha and Ophiosphaerella korrae are the principal causal agents of spring dead spot in Oklahoma. Ophiosphaerella herpotricha is found throughout the state while O. korrae has primarily been found in the eastern portion of the state.  O. korrae, when identified, is often mixed with populations of O. herpotricha.   The production of spores is thought to be rare for O.herpotricha but more common for O. korrae.  Therefore, spread of these fungi primarily occurs through movement of infected plants or infested soil by equipment, people, animals, and running water.  Infection of the turf begins when soil temperatures are mild (~70 °F).  In Oklahoma, infection of susceptible grasses begins in late September and will continue as long as soil temperatures are above 50° F. Fungal growth and plant infection resumes in early spring, may slow growth of plants, and will eventually subside once soil temperatures climb above 70° F.

Turfgrass grown under high nitrogen fertility or that receive late-season applications of nitrogen to extend green color, are more prone to the development of SDS. Certain bermudagrass varieties have better partial resistance to SDS than others.  However, more cold tolerant varieties generally have less SDS than non cold-tolerant varieties (See www.ntep.org).  During summer months SDS subsides — smaller patches will fill in with new grass growth. Larger patches may not fully recover in a single season and the fungus will survive in infected plants as mycelium.

Spring dead spot often kills crowns, stolons, or rhizomes of infected plants.  Surviving plants around, or in, dead areas are primarily responsible for re-growth into the affected areas during late spring and summer months.  Balanced soil fertility programs in early summer will increase the speed of recovery and aid bermudagrass in outcompeting weed encroachment (see Fact Sheet  HLA-6420). Avoid late season applications of nitrogen fertilizers. It is generally recommended to not fertilize after September 15 in Oklahoma.  For small lawns and when patches are identified before they are large, symptomatic areas can be dug and the soil and plant material removed in and around the dead area. The disease has been found in soils with a range of pH levels, and acidification of soil to control the disease is not currently recommended.  However, maintaining a proper soil pH range for bermudagrass can encourage plant vigor and reduce plant stress. When the disease is active, do not de-thatch or core aerify as this can spread the fungus. Wait and remove excessive thatch or aerify in the summer; these activities may help reduce disease severity. Numerous cultivars are commercially available that have partial resistance to spring dead spot. No cultivar should be expected to be immune. Reseeding or resodding with a partially resistant variety is advised for situations where a very susceptible turfgrass is present and levels of disease are unacceptable.

Few effective fungicides are available for the homeowner to use for spring dead spot control. However, fungicides are available to commercial turfgrass maintenance operators for SDS control.  Fungicides in the Fungicide Resistance Action Group (FRAC) 3 (e.g. demethylation inhibitors or DMIs) should be applied in the fall before soil temperatures drop to 70° F for chemical control to be effective.  A second fungicide application 30 days later will result in better control than a single fall application.  It is highly recommended the affected areas are photographed or otherwise mapped in the spring and fall fungicide applications are targeted to only those areas where the disease was present.  Recent research has indicated a single spring application is generally not effective, but a single spring plus a single fall application is as effective as two fall applications.  Because they only provide partial control, fungicides should not be the only management strategy.  An integrated pest management (IPM) program that combines both cultural and chemical management strategies will provide the best results without encouraging other turfgrass disease problems, such as dollar spot or large patch.  For suggested fungicides, rates, and application intervals, refer to the current OSU Extension Agents’ Handbook of Insect, Plant Disease, and Weed Control (E-832).