Phymatotrichum root rot, also known as cotton root rot and Texas root rot, is caused by the fungus Phymatotrichopsis ominvorum.  The fungus attacks more than 2,000 species of broadleaf plants, but does not affect monocots (grasses).  The disease is economically important to cotton, alfalfa, peanut, ornamental shrubs, and fruit, nut and shade trees.

The fungus is capable of persisting for a long period of time in the soil.  It is most destructive in soils that are of limestone origin (calcareous), highly alkaline (high pH), and are exposed to high summer temperatures.  Therefore, soil type and cold temperatures limit the geographic distribution of this disease to areas in the southwestern and south central United States.  In Oklahoma, Phymatotrichum root rot is mostly restricted to the southern tier of counties in the Red River Valley.  The disease has been reported in the following counties: Atoka, Bryan, Carter, Choctaw, Comanche, Cotton, Garvin, Jefferson, Johnson, Kiowa, Love, Marshall, McCurtain, Muskogee, Pushmataha, Stephens, and Tillman.

Symptoms of Phymatotrichum root rot occur  most often from June through September after soil temperatures reach 82 F.  In row crops, symptoms appear as patches of wilted plants, which rapidly die.  Trees and shrubs may die more slowly.  The leaves of affected plants dry, turn brown, and remain attached to the plant.  Affected areas expand to form circular areas of dead plants (Figures 1 and 2).  Newly wilted plants develop at the leading edge of the affected areas as the infection centers enlarge during warm, moist periods.  Grassy weeds may invade areas killed by the fungus.  Affected areas continue to enlarge in subsequent years as the fungus grows through the soil from plant to plant.  Reported rates of spread for alfalfa may be as much as 2 to 8 feet per month in mid summer and 5 to 30 feet per year in cotton.

A unique feature of this disease is the production of spore mats that may form on the soil surface near dead plants.  The spore mats are circular  patches of white moldy growth of varying size.  The spore mats turn tan in color before they dissipate after a few days. 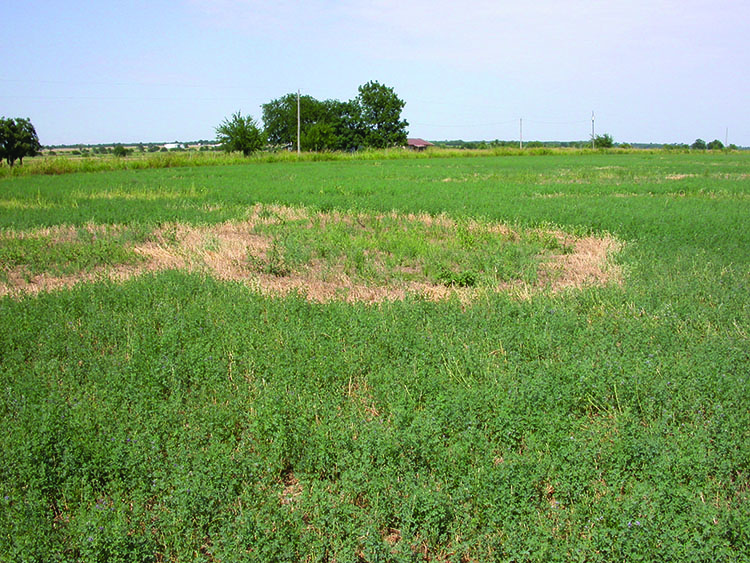 The fungus survives almost indefinitely in the soil as small (1 to 5 mm in diameter), resistant, seed-like structures called sclerotia.  Sclerotia have been recovered from soil at depths of up to 8 feet.  In the summer, mycelium from germinating sclerotia or from fungal fragments overwintering on roots of perennial plants infects nearby roots. The fungus enters the roots of infected plants, decaying the bark and penetrating the woody portions of the root.  Nutrients derived from infected plants support the growth of the fungus through the soil to infect new plants.  The function of spores produced on spore mats in the disease cycle is unknown.

The fungus appears to be indigenous to certain fields and there is little known on how the fungus spreads to new fields.  However, disease may develop following the transplanting of infected plants.

Although there are several management practices available that help reduce the occurrence and severity of this disease, none are highly effective.  Attempts to control the disease with fungicides and soil fumigation have not been successful.  The most effective strategy is to define areas infested with the fungus and plant crops and plant species that are not susceptible to the disease.

Use of a moldboard plow (6 to 8 inches deep) has reduced the disease.  Deep plowing immediately after harvest is thought to disrupt the formation of sclerotia in the upper soil profile.

Crop rotation for three to four years with a grass crop such as grain sorghum has been beneficial in some instances.  Rotation may not reduce levels of sclerotia in the soil.  The effects of crop rotation are thought to result from the addition of organic matter to the soil, which increases the activity of soil microorganisms that compete with or inhibit the fungus.  The direct addition of organic matter to soil and the incorporation of green manure into soil are thought to produce the same  beneficial effect.  The decomposition of green manure also may liberate chemicals that inhibit the fungus.

Barriers of resistant crops can be used to limit the spread of the fungus.  Grain sorghum is typically planted in border rows surrounding infested areas.

Planting early and the use of early maturing varieties have been used in some crops to escape the disease.  The goal is to harvest before the disease becomes active in the summer.  In Oklahoma, vegetable production systems in the spring may be useful.

Addition of fertilizers and other amendments such as sulfur have been used in attempts to change the alkalinity of the soil, but results have been variable.  Nitrogen applied as anhydrous ammonia may be beneficial for cotton production.  However, one of the more effective treatments was devised in Arizona in 1939 for infected trees and shrubs and for replanting valuable plants into infested sites.  A ridge of soil is formed around each plant at the drip line.  The entire basin within the ridge is covered with cow manure or similar organic matter to a depth of 2 inches.  Ammonium sulfate and sulfur, each at a rate of 1 lb. per 10 sq. ft., is broadcast over the manure.  The basin is then flooded with sufficient water to soak the soil to a depth of 3 feet.

Trees or shrubs showing slight symptoms of the disease also can be cut back to one-half the top growth to compensate for roots lost to the disease.  The soil should be kept moist for several weeks after treatment.  Recovery is usually complete within the season.  This technique is most effective when applied before the root rot is extensive.

Resistant varieties have not been developed for crops that are normally susceptible to the disease.  Therefore, crop and plant species that are naturally resistant must be selected.  The following list is intended to aid in selecting resistant plants and avoiding susceptible ones for areas known to be infested.