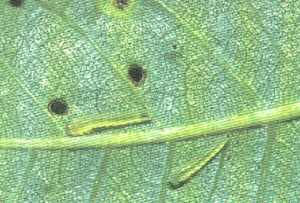 The larvae feed on foliage of many trees including pecan. Hosts include black and English walnuts, butternut, pecan, pin oak and various species of hickory.

Excessive numbers of these caterpillars can defoliate the trees and severely affect tree vigor, yield, and nut quality. The earlier the defoliation, the more harmful the damage will be. Trees can withstand 2 or 3 consecutive years of heavy defoliation before they die. Epidemics were rare when standard, petroleum-based insecticides were used; however, now that many of the biorationals have been heavily adopted for insect control in pecan, these insects have assumed a more prominent role. It is unlikely that they will assume the status of a major pest.

There is one generation of this pest per year in Oklahoma. Wasps emerge in early spring to deposit their eggs on new foliage. Larvae feed on the leaves in April and May. The larvae are often gregarious and feed in groups, but do not spin webs in which to feed. Larval feeding on the foliage causes initially, very tiny holes in the leaves. As the caterpillars mature and if numbers are excessive, then leaves can assume a very tattered appearance, looking like they were shot with a shotgun. This generally occurs in Oklahoma prior to catkin formation. Mature larvae leave the trees and pupate in the soil to overwinter.

Sawfly adults are small stingless wasps that are generally darker in color. They do not appear to have the constricted waist of many stinging wasps. Female sawflies have a snort, stout, saw-toothed ovipositor. They use these to cut into plant material and deposit their eggs. The larvae are small translucent green caterpillars. Unlike the caterpillars of moths and butterflies, sawfly larvae possess six sets of abdominal prolegs. Butterflies and moths will have 1 to 4 set of abdominal prolegs. The larval stage of this insect can often assume a slug-like appearance, looking somewhat shiny and expanded at the head end. As they increase in size (up to 2/3 of an inch) the caterpillars will have assumed a somewhat spiny appearance.