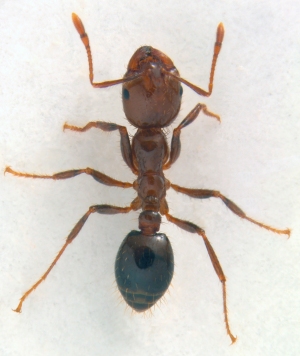 The red imported fire ant (RIFA) is native to the state of Mato Grosso in Brazil. It was introduced into the United States at Mobile, Alabama, about 1940. The exact date and method of introduction is not known. It spread rapidly through the southeastern U.S. during the 1940s and '50s and is presently found in 13 states from southern North Carolina and Florida west to portions of California. The first infestation found in Oklahoma was in the Waurika area of Jefferson County in July, 1985. Surveys during the fall of 1985 found single colonies in Bryan, Marshall, and McCurtain Counties along the southeastern edge of the state. The RIFA has continued to spread to the north and west. As of 2007, it has been found in over 40 counties as far north as Tulsa, Payne, and Blaine Counties and as far west as Jackson County. Many of these infestations are thought to be associated with movement of nursery stock and/or turf. Many of the more northern infestations are in small, isolated areas, usually in cities. Many of these have been treated and it is not known if all of these areas currently have active infestations. Some widespread, active infestations are present in the southeastern counties, especially from Love County to McCurtain County along the southern edge of the state.

The RIFA is a small ant with workers varying from 1/8 to 1/ 4 inch long. It is usually dark reddish brown in color and has two nodes on the petiole and a two-segmented antennal club. They are similar in appearance to many of our common house and field ants and are especially difficult to distinguish from the Southern fire ant (Solenopsis xyloni), which is native to most areas of Oklahoma.

New colonies are formed by one (or more) winged, mated females (queens) following a mating flight. The mated queens find suitable nesting sites, shed their wings, and begin digging underground chambers in which to lay eggs. The first eggs and larvae are cared for by the queen. They emerge as small workers after 3 to 4 weeks. Thereafter, the workers care for the queen and the brood, forage for food, and expand the nest.

An undisturbed colony can increase in size rapidly and may contain 10,000 or more workers after one year. Winged reproductives will also be produced sometime in the second half of the first year. A mature colony (3 years old) may contain 100,000 to 500,000 workers and several hundred winged forms. 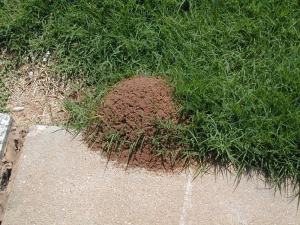 Mounds. As the workers extend the nest, the excavated soil is brought to the surface and a mound begins to develop. The mound may be small and inconspicuous for the first year or more, especially in sandy areas. In soils with considerable clay content, the mounds often reach 12 inches high and 12 or more inches across. Mounds in sandy soils are flatter and wider. The mounds are not denuded of vegetation and may have grass growing up through them. Each mound has several foraging tunnels that extend in all directions away from the mound just under the soil surface. These have openings to the surface at irregular intervals and may extend outward for 200-300 feet The RIFA will nest in almost any type of soil but mounds are not common in heavily wooded areas. They prefer open, sunny areas such as pastures, parks, lawns, meadows, and cultivated fields. 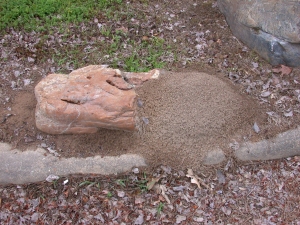 Spread. Imported fire ants spread naturally during their mating flights. This spread is usually one mile or less but flights of up to 12 miles have been recorded. The flights occur most commonly in the spring or early summer, one or two days after a rain when the weather is warm and sunny and the wind is light. The ants can also float downstream in masses or on debris during floods. The RIFA is also spread by man. The winged females appear to be attracted to shiny objects and will sometimes settle on cars, trucks, railroad cars, etc. in large numbers. These ants can be carried for long distances as the vehicles move from place to place. Ants can also be moved with nursery stock or grass sod and in soil on soil-moving equipment. The spread of the RIFA is likely to be limited by dry conditions to the west and by cold temperatures to the north. These factors may operate to cause this species to be only an intermittent problem in southern Oklahoma. However, there are some indications that it may be able to survive in most of the same areas as our native fire ant and the eventual limits of its distribution are uncertain at this time. It seems likely that we will have mounds of RIFA found along the southern tier of counties each year. Incidence and numbers will likely vary from year to year based on winter temperatures and spring/summer heat and moisture conditions. A cold winter followed by a drier than normal spring and a hot, dry summer would likely reduce the possibility of ant survival.

The most important problem with the Rl FA is its sting. The workers can sting repeatedly and attack anything that disturbs their mounds or food sources. Symptoms of the sting include burning and itching, followed by the development of a pustule that may take a week or more to heal. Scratching these pustules can lead to secondary bacterial infections and can leave permanent scars. As usual with insect stings, certain persons are hypersensitive to fire ant venom and may suffer chest pains or nausea or lapse into a coma from one sting. Birds and small animals can be harmed, or occasionally killed, by fire ant stings. They will also sting poultry and domestic animals. The presence of fire ants in crops or gardens may prevent hand picking of fruits and vegetables because of the threat of stings. The presence of mounds may damage harvesting equipment. In cities, fire ants sometimes nest in electrical circuitry, and they have been known to short out air conditioners, get in telephone junction boxes, traffic and light control boxes, and in transformers. They sometimes nest under sidewalks or highways and as the colony dies out, the area of the nest will sink and cause a pot hole. Damage to plants occurs under some conditions. They will feed on germinating seeds, causing damage to corn and soybeans. They also feed on buds and developing fruits of crops such as beans, berries, okra, and citrus. They may girdle young trees in an attempt to find a source of water. Fire ants also feed on the honeydew produced by aphids. They often tend aphids on plants and the aphids damage the plants by their feeding activities.

In general, nonchemical methods are ineffective against fire ants. Digging up or tilling mounds usually results in dispersal of ants or movement of nests; however, boiling water is reportedly a fairiy effective treatment for individual ant mounds. Approximately 3 gallons of hot water poured on a mound will eliminate nests about 60% of the time. Surviving nests would need retreatment. This method may work in certain situations, but care must be taken not to pour hot water on desired plants. Also extreme care should be exercised when handling large volumes of hot water to avoid serious burns.

Best control has been achieved with chemical treatment of nests and surrounding areas. Usually, the best control will be obtained if treatment is made within 2 or 3 hours after sunrise or within a couple of hours of sundown. Individual mounds can be treated using drenches, surface sprays, granules, or baits. Because these ants can make deep gallery systems, drenching usually achieves more reliable results than surface sprays. An easy effective method to drench a mound is to use a liquid insecticide diluted in water (per label directions) and applied from a sprinkling can. Thoroughly wet the center of the mound with 2-3 quarts of drench. Allow a few minutes for this to soak into the soil then use 1 -2 gallons of drench over the rest of the nest. After allowing this to soak in a few minutes, pour the remainder of the drench (1 -2 quarts) in the center of the nest. Insecticide granules can be sprinkled on the top of and around a mound. These should be applied at rates specified on the product label. Treatment should be followed by a gentle watering of the mound. Please contact your local county extension office for current information.