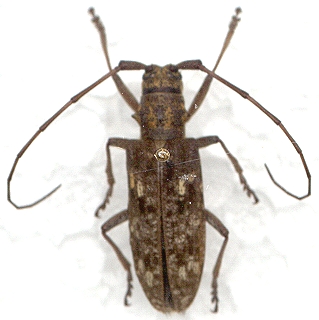 There are several species of longhorned wood borers in the genus Monochamus which attack and breed in various conifers. The larvae (roundheaded wood borers) are commonly known as sawyers or pine sawyers. The name sawyer has been used to describe the larvae because they frequently make loud noises while they are feeding. The adults and larvae are most commonly associated with or infest freshly cut, felled, stressed, dying, or recently dead trees. Young larvae feed on the inner bark, cambium, and outer sapwood, forming shallow excavations (surface galleries). These galleries are filled with coarse fibrous borings (saw dust) and frass. As they grow older, growing larger with each larval molt, they start to bore back toward the surface, thus forming a U-shaped tunnel. After the last stage of larval development, they form a pupal cell at the outer end of the tunnel near the surface of the wood. After pupation, the adult emerges by chewing a hole through the remaining wood and bark. Pinewood nematodes (pine wilt disease) have caused the decline and death of numerous pines in Oklahoma and throughout much of the rest of the U.S. The disease is unique in its complexity, since it involves a plant-parasitic nematode, one or more insect vectors (primarily pine sawyers), woodstaining fungi, and possible other organisms. 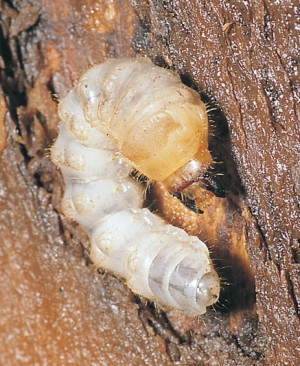 Pine sawyers are secondary invaders that lay eggs in conifers that are declining as a result of any kind of stress. The pine sawyers are non-diappausing insects and do not have a synchronized emergence. Thus, there can be larval feeding and adult emergence during warm periods year-round. During mid-summer, it is estimated that the beetles complete a life cycle (egg to adult beetle) in 50 to 60 days. The majority of the adults emerge and are active from May through late September. However, since there is staggered emergence during this period (non-synchronized emergence), all life stages can be present over the summer, and during warm periods in the winter some adults may emerge. For this reason, it is virtually impossible to ensure control or limit spread of these beetles by pesticidal means. The emerging adults exhibit two behaviors which consist of visiting healthy pines and feeding on the bark, and/or visiting stressed/dying trees and feeding, mating, and laying eggs in small cavities the females chew in the bark. 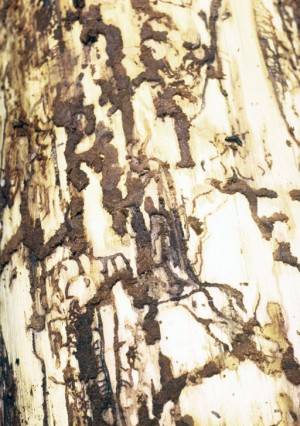 Adult beetles are cylindrical, hard-shelled, and sometimes colored in contrasting bands, spots, or stripes. Adult beetles are commonly referred to as longhorned beetles because their antennae are usually at least half as long as the body. In some species, it is nearly one and a half times as long. The larval stages of the beetle have no legs, are white to yellowish in color, and are fleshy and rather round-bodied.