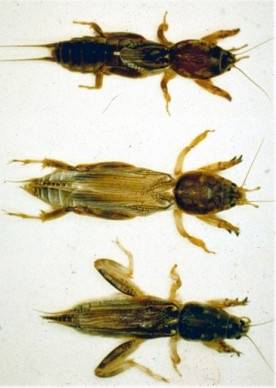 The northern mole cricket prefers damp areas along the margins of streams, lakes, or ponds or in low areas in grasslands. They can damage well-watered lawns, golf courses, etc. by dislodging plants or seedlings as they burrow beneath the soil surface. Dislodged plants become dry and soon die. Mole cricket burrows may be very evident, especially in newly seeded or sprigged turf. Mounds of dirt are pushed above the turf and the damaged area is easily scalped. The prairie mole cricket occurs in tall grass prairie and prefers dryer areas. It does not survive plowing or heavy grazing and is now found mostly in hay meadows and other undisturbed areas. It does no economic damage to these areas. 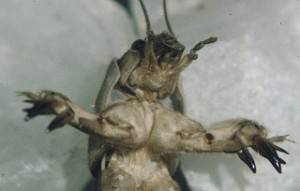 Mole crickets spend most of the year burrowing just below the surface of the soil. They are active above ground in the spring (April and May in Oklahoma) for mating and dispersal flights and to some extent in the fall (September and October). Eggs are laid in burrows in the soil in the early summer. Southern mole crickets mature in about one year while the northern and prairie species probably have a two or three-year life cycle.

Mole crickets are large, brownish insects. They are rather cricket-like in shape but have mole-like, digging front legs. The adults have wings and many are powerful, though clumsy, fliers. The body is covered with short, dense hairs. Some species have darker or lighter markings on the thorax.

Southern mole cricket [Scapteriscus acletus]. The front tibia has two claws that are separated by a space that is almost as great as the width of the claw, and is "U" shaped, and the hind femur is shorter than the pronotum. There is no process on the front femur. Length 1-11/4 inches. This species has been reported from either Cherokee, OK, or Cherokee County but is not known to be established here. It was introduced into the southeastern United States in the early 1900's and now occurs along the coast from Texas to North Carolina. It might eventually reach southeastern Oklahoma and specimens from this area should be examined with this possibility in mind.

Tawny mole cricket [Scapteriscus vivinus] The front tibia has two claws that are separated by a space narrower than their width, and is "V" shaped. This species has not been reported in Oklahoma. It was introduced into the southeastern United States in the early, and is considered to be the most damaging mole cricket of turf in the southeastern U.S.