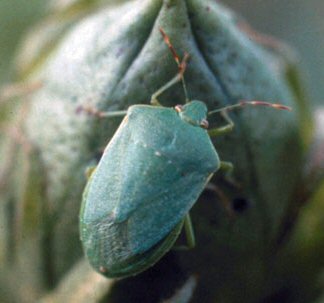 Damage to stone fruit is caused by adult stink bugs since the nymphs are not mobile enough move to early producing fruit trees like peaches or nectarines. In grapes; however, adult stink bugs will often lay their eggs early in the season and many small nymphs will begin to suck the juices out of the maturing fruit.

Feeding by stink bugs on fruit, such as peaches early in the season (prior to shuck split), causes the flower or developing fruit to abort. After shuck split, sting bug feeding causes a characteristic dimpling and subsequent catfacing injury to tree fruits. Mature fruits will have depressed lines and multiple corky areas resulting in a gnarled and mottled appearance. In grapes and other small fruits, feeding by stink bugs can cause blackened areas that reduce the quality of the fruit; however, severe infestations may cause entire clusters to shrivel from the extensive withdrawal of liquids. I n grapes, stink bug nymphs will readily hide when disturbed, therefore, careful inspection is necessary.

Stink bugs overwinter as adults in protected areas such as fence rows, grassy field borders, under stones or bark of trees. They become active during the first warm days of spring and can be seen in orchards around the time of bloom through shuck-fall. A few bugs may be present from May through June (primarily brown stinkbugs), but the green stink bug is more prevalent in mid to late June and tapers off in fruit trees in July and August with only one generation per year. A second generation of brown stink bugs may occur in July and August. Egg laying can occur anytime when adults are present from May through July and August. Female bugs may move readily between weeds and other alternate hosts, and fruit trees.

This true bug measures from 1/2 to 3/4 inch in length and about 1/2 inch wide. Stink bugs will vary in color from bright green to a dull brown and have a characteristic shield (five cornered) shape. The green stink bug is, as the name implies, green and has piercing mouthparts that they use to remove juices from the tissue once the mouthparts have pierced the surface. Although green stink bugs are common in fruit production systems, other species, such as the brown stink bug create the same damage. The brown stink bug can be mistaken for a beneficial stink bug known as the spined soldier bug. The latter species is easily distinguished from the pest by the general body shape and width of the mouthparts. In the predaceous species, the front portion of the triangular shield is often pointed sharply at the outside edges and the mouthparts are distinctly wider. In addition the spined soldier bug has a distinctive dark spot on the wing tips. The nymphal stages are similar to the adults but lack wings and may also possess bright red, yellow or orange markings on the abdomen. They may range in size from about 1/8 inch long to nearly 1/2 inch long when mature.