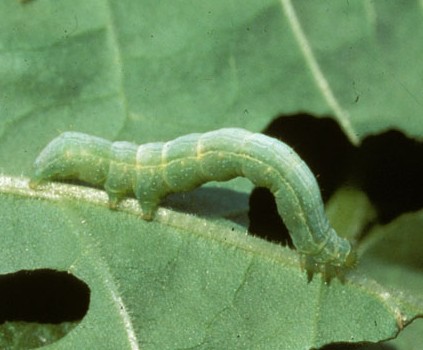 Cole crops such as cabbage, collards, broccoli, cauliflower, and turnips are commonly infested. Cabbage loopers also feed on other vegetables such as lettuce, spinach, celery, parsley, beets, peas, potatoes, and tomatoes. Other hosts include alfalfa, soybeans, and cotton.

Cabbage looper feeding injury closely resembles that of the imported cabbageworm; young larvae scarify the leaves and older larvae eat irregular shaped holes of various sizes. Young plants can be killed by loopers if they destroy the growing point, or they can cause branching in brassicas by early feeding on the growing point. Problems in cabbage include loopers feeding on the head, larvae getting down in the heads at harvest time, and frass (excrement) in the heads. Often, if not controlled, larvae are in broccoli heads at harvest. The larvae are not easily washed out and will go to market with the broccoli. Damage to leafy vegetables is obvious from insect-eaten leaves (large areas can be eaten out). Tomatoes are damaged by larvae feeding on the leaves and by exposing fruit to the sun resulting in sun scald.

This species overwinters as pupae in the soil or in cocoons on host plants. Adults emerge about the middle of April and larvae are present by late April or early May. The moths are active at night and each female may lay 275 to 350 eggs singly on the upper surface of leaves. Larvae feed for two to four weeks before pupating. The pupal stage lasts for two weeks. With warm temperatures, development of all cabbage looper stages - from egg to adult - takes about 18 to 25 days. Looper activity (egg laying and larval feeding) will decrease as cool weather (50 F) becomes common. There are three to five generations per year and activity continues through most of October in most years.

Cabbage looper moths have a wingspan of 1 1/2 inches. The forewings are grayish brown with a silvery spot resembling a "V" or figure 8 near the center. The hindwings are pale but become darker near the outer margin. Eggs are round, greenish white, and slightly smaller than a pinhead. Newly hatched larvae are green. As they mature they develop white stripes, two on top and two on each side. They have only three pairs of prolegs, two pairs on the abdomen and one pair at the anal end. Larvae move in a characteristic "looping" motion. They reach about 11/5 inches long at maturity. The pupal stage is encased in a loosely woven, white cocoon on the host plant.