Wheat streak mosaic (WSM), High Plains disease (HPD), and Triticum mosaic (TriM) are virus diseases transmitted by the wheat curl mite (WCM).  All three of these diseases can affect wheat in Oklahoma by causing yield reductions ranging from insignificant to total loss.  WSM and HPD also can impact corn and other crops, and TriM can impact barley.  These diseases typically occur in the panhandle and western OK, but also occasionally spread as far east as Ponca City and Kingfisher.

The WCM (Figure 1) is tiny (1/100 inch long), sausage-shaped with two pair of legs and can best be seen with the aid of a 20X magnifier. WCMs are usually found in protected areas of the host plant such as a curled leaf, a leaf whorl, or between leaf veins.  They infest wheat, corn, barley, oats, and foxtail millet, as well as grass hosts including jointed goatgrass, sandbur, and Canada wildrye. WCMs can increase rapidly when conditions are favorable, going from egg through two nymphal stages to adult in as little as eight to ten days at 78 F.  WCMs rely totally on air currents and wind to move from plant to plant, floating much like dust particles. 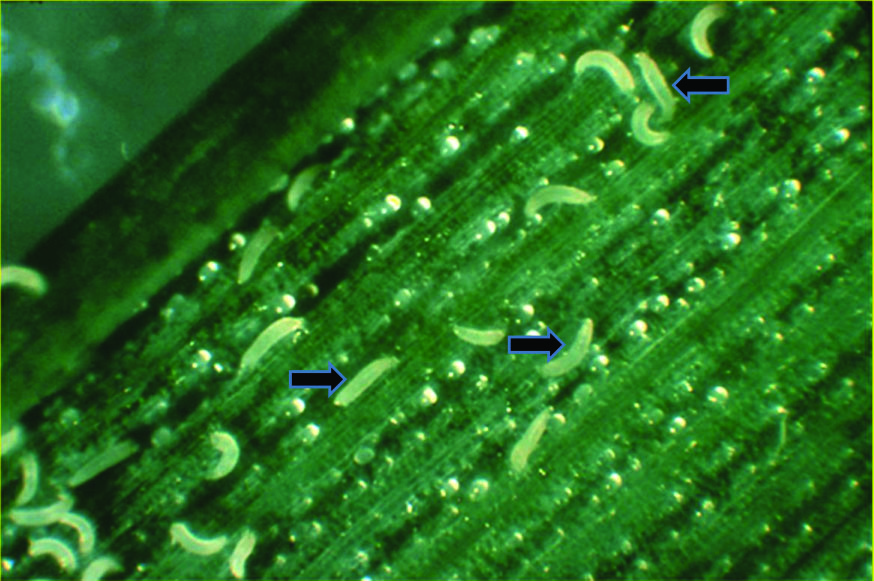 WSM is caused by Wheat streak mosaic virus (WSMV).  This virus, like the WCM, has a wide host range of crops including wheat, corn, oat, barley, rye, pearl millet, and sorghum.  Multiple grassy weeds also can be infected and include jointed goatgrass, grama grass, sandbur, green foxtail, barnyard grass, love grass and smooth crabgrass.  WSM, either alone or in combination with the other two virus diseases, can cause severe yield losses in winter wheat especially when infection occurs in the fall as indicated for WSM in Table 1.

A Severity rated on a scale of where 0=no symptoms, 3=severe symptoms of WSM.

B Values followed by an asterisk differ significantly from the “not infected” treatment.

HPD is caused by Wheat mosaic virus (WMoV). It was previously called High Plains virus and sometimes is referred to as HPV.  HPD has been recognized as a disease of wheat and corn in the southern plains since the early 1990s.  HPD can be found by itself or in combination with WSM, and is more detrimental to corn than to wheat when infecting alone.

TriM was first identified in 2006, when wheat plants of the variety RonL with temperature-sensitive resistance to WSM showed WSM-like symptoms.  Dr. Dallas Siefers located at the Hays Experiment Station in Kansas isolated and characterized this virus, naming it Triticum mosaic virus (TriMV).  TriMV causes symptoms in wheat similar to those caused by WSMV and WMoV, and can be found by itself or in combination with the other two viruses.  Less is known about TriMV regarding its host range and other factors because it was so recently discovered.  However, the disease cycle of TriMV appears to be similar to WSM and HPD.

When WSMV infects wheat by itself, symptoms typically include yellow streaks with a green background (indicative of a later/mild infection – Figure 2A) or greenish streaks with a yellow background (indicative of an early/more severe infection).  Other symptoms on wheat leaves caused by all three viruses are similar and include yellowing, desiccation of foliage, and leaf death (Figure 2B-2C).  Stunting also is a typical symptom and can range from severe (if infection occurred in the fall or early spring) to mild (if infection occurred later in the spring).  It is not difficult to determine that plants have symptoms of these viral diseases in the field, but laboratory testing is required to identify the specific virus(es) present.

Figure 2A. Symptoms of wheat streak mosaic (WSM) and high plains disease (HPD) on wheat (A and B, respectively) and of HPD on corn (C). Symptoms of Triticum mosaic on wheat are similar to those of HPD (B). Credit and permission to use photos B and C from Dr. Stan Jensen, University of Nebraska. 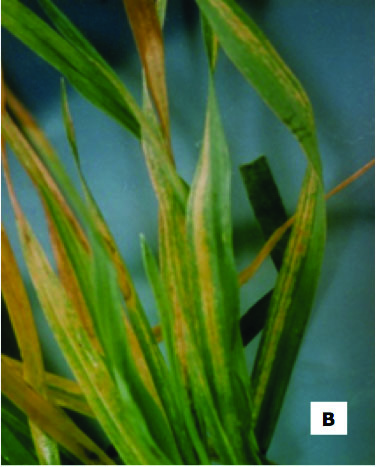 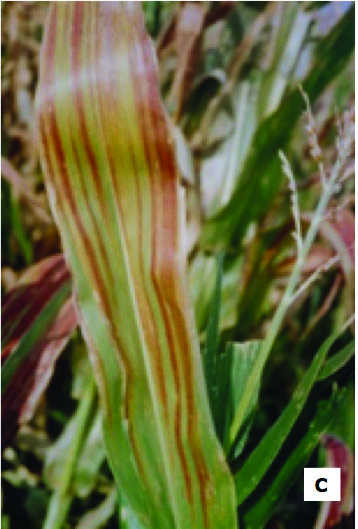 The disease cycles of WSM, HPD, and TriM are similar.  WCMs infected with these viruses survive on volunteer wheat, corn, or other grasses and spread to fields of wheat or corn on wind currents.  This can occur in the fall or spring, but the impact of these diseases on winter wheat is most severe when infection occurs in the fall (Table 1).  This often occurs as the result of virus-carrying WCMs spreading from volunteer wheat growing in the field from the previous crop.  Such volunteer wheat is called a “green-bridge” as it allows WCMs to spread to the planted crop of wheat.  After infection, the virus lives and replicates inside of the host.  Symptoms of any of these viral diseases typically do not appear until the spring whether infection occurred in the fall or spring.  As temperature increases in the spring, symptoms become more severe.  WCMs and the viruses are thought to over-summer by surviving on volunteer wheat and alternative hosts.  Seed transmission of WSMV has been demonstrated, but typically is <1 percent (1.5 percent is the highest transmission observed).  This could be significant if wheat seed is moved to an area or country free of WSM, but within the state of Oklahoma seed transmission is not considered significant because of the widespread nature of all three diseases.

Limiting losses from WSM, HPD, and TriM are related to limiting WCM infestations.  Hence, destruction of volunteer wheat and/or corn reduces the chance of mite infestations.  Mites have a life span of 14 days, so destruction of volunteer wheat or corn at least 14 days or more prior to emergence of seedling wheat is imperative to help limit infection by these viruses in the fall.  A late planting date (01-Oct or later in northern OK and 15-Oct or later in southern OK) and mowing/killing grassy weeds and grasses in ditch rows and in field corners also can help limit infestation by virus-carrying mites in the fall.  It also is imperative to be a good neighbor and control volunteer wheat or corn that is adjacent to a commercial wheat field to help limit these diseases in neighboring wheat fields.  Finally, several varieties with genetic resistance to WSM have been released and are available. However, these varieties are not hard red winter wheat or are not well-adapted for production in most of Oklahoma outside of the panhandle. For more information on the reaction of varieties to these and other diseases, see OSU PSS-2142 or KSU MF991.