The pecan nut casebearer, Acrobasis nuxvorella Neunzig, is one of the most devastating nut-feeding insects that occur in pecans. The pecan nut casebearer (PNC) is found throughout pecan growing regions from Florida to southern New Mexico. In Oklahoma, adult casebearer moths deposit eggs during late May or early June. Eggs are deposited on the tips of nuts shortly after tree pollination. After hatching, the larvae burrow into nuts. Each larva may damage an entire cluster. The primary means of controlling this insect is the use of a well-timed application of insecticide based on infestation levels from each individual orchard.

Adult casebearer moths (Figure 1) are gray to dark gray, have a dark ridge of scales on the forewings, and are about 1/3 inch in length. Mating and egg deposition occurs during the night, and female casebearers can deposit 50 to 150 eggs during their five to eight day life span. Eggs are small and oval shaped (0.36 X 0.65 mm). The first generation of eggs are laid singly at or near the calyx lobes of nuts after pollination (Figure 2). PNC eggs are white when first laid, then gradually change to a red color three to five days before hatching (Figure 3). When larvae hatch they are white to yellow in color (Figure 4) and feed initially on buds. Full grown larvae are olive gray to jade green and reach about 1/2 inch in length (Figure 5). As the larvae grow and move to developing nuts, the will bore into the base of one or more nuts. Black excrement (frass) and silk at the base of nuts indicates larval entry (Figure 6). They remain within the nut and feed for four to five weeks. Full-grown larvae will pupate inside the pecan and emerge as moths 9 to 14 days later. 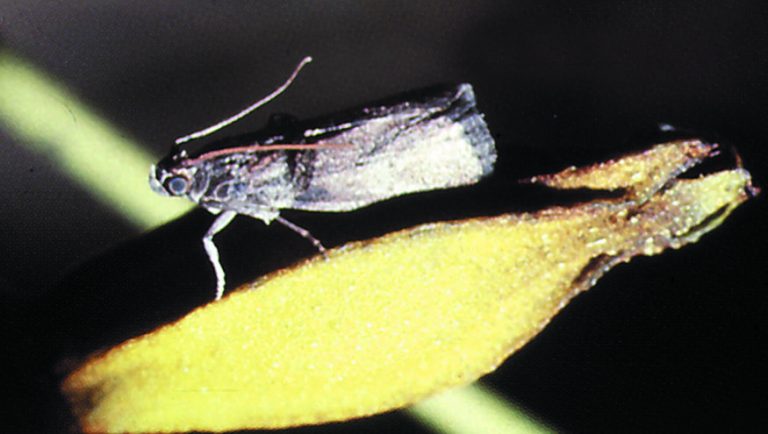 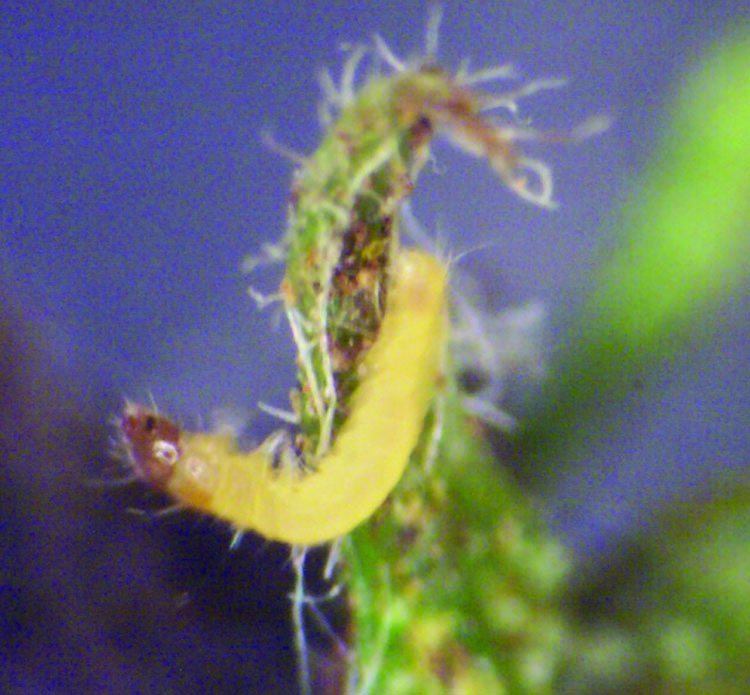 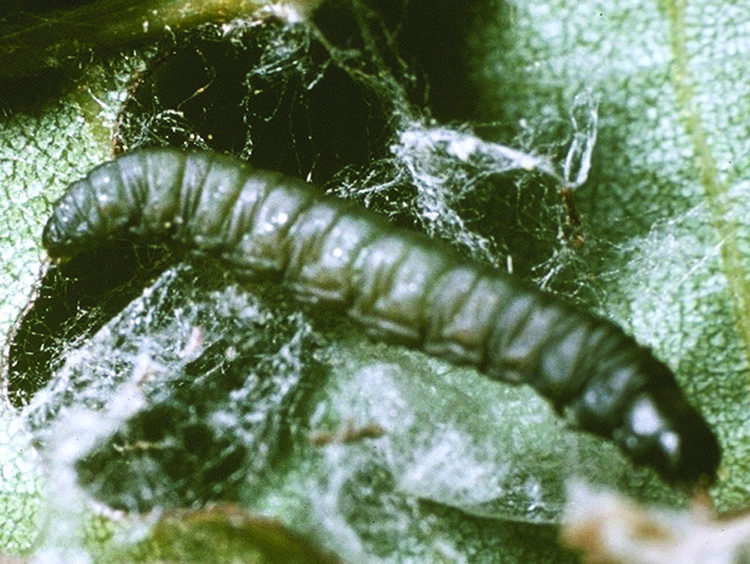 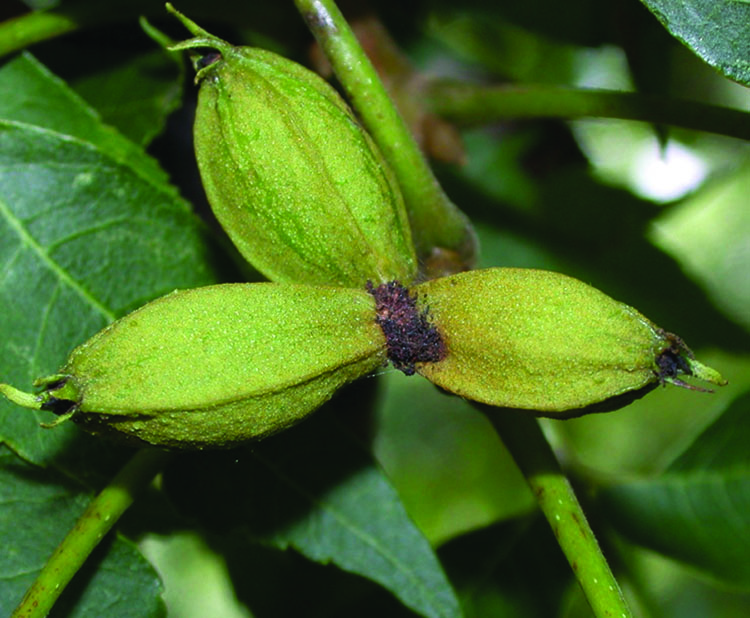 In Oklahoma, the pecan nut casebearer completes two to three generations per year. Overwintering larvae develop into pupae, and ultimately moths that emerge from late May to early June. After tree pollination, female casebearer moths begin laying eggs on pecan nuts. These eggs result in first-generation larvae that feed on pecan nuts and generally cause the most damage.

Second-generation PNC begin appearing in mid-July. Larvae feed primarily on pecan shucks. Unless populations are extremely high, little damage is created from second-generation larvae. Third-generation PNC hatch 30 to 40 days later and feed for a short time (if they feed at all) on shucks. Late in the season, each small larva forms a tightly woven, protective silken case (hibernaculum) near a bud or leaf scar for overwintering. These larvae emerge from hibernacula in the spring and feed by tunneling into shoots. Pupation of the overwintering generation occurs in these tunnels formed from feeding, and adults emerge the following spring to deposit the first generation of eggs on pecan nuts.

In Oklahoma, egg-laying by PNC begins around the end of May in southern counties and ranges to June 15 in northern parts of the state. In central Oklahoma, egg deposition usually begins around June 4 or 5, depending on weather conditions. Excessive rainfall or cold temperatures may delay development of the overwintering generation.

Scouting for PNC eggs should begin one to two weeks before nut entry by larvae. This requires looking for eggs on the nuts and using a hand lens to determine the maturity of eggs. To determine infestation levels, nut clusters should be examined. A cluster is infested if any eggs are found or evidence of larval entry is observed. Examine 10 nut clusters per tree across several trees. If 2 or more clusters are infested before 310 clusters have been examined, an insecticide application should be made as soon as possible. If less than two clusters are found infested, sampling should be repeated in two to three days.

Nut clusters with eggs should be tagged with a ribbon or tape and checked daily to determine egg maturity. Insecticides should be applied within one to two days after the eggs hatch.

Use of Pheromone Traps

Pheromone-baited traps for PNC are available. The pheromone (sex attractant) mimics the chemical emitted by female casebearer moths and attracts males to a sticky trap. Trap captures can be used to detect the arrival of PNC into an area, aid the grower in estimating population numbers, and provide a signal of when first significant nut entry by larvae may occur. The following guidelines should be followed in using pheromone traps, scouting for eggs, and nut entry to determine when or whether insecticide applications are warranted to prevent economic damage from PNC.

Insecticide applications should be properly timed to achieve the best control. Whenever possible, biological insecticides or insect growth regulators should be used for controlling PNC instead of synthetic pyrethroids, carbamates, or organophosphates. The latter materials, while effective, can result in reduction of parasite and predator populations. Due to loss of beneficial organisms, this increases the possibility of rapid population growth of aphids and spider mites. In addition, carbamate and pyrethroid insecticides can be reserved for pecan weevil control later in the growing season where efficacy of these compounds is essential for control.

The active ingredient in some biological insecticides is a toxin found in the bacterium Bacillus thuringiensis, commonly referred to as B.t. While B.t. formulations (Javelin®, Dipel®, etc.) are effective against larval stages (caterpillars) of moths, these compounds are sensitive to environmental conditions. Larvae must consume these materials and once consumed, the toxin disrupts the gut wall of the insect, which leads to death. Heavy rainfall and sunlight cause these materials to break down quickly before they have been consumed. For these reasons, timing of application is critical. Biological insecticides pose little threat to natural enemies, wildlife, and humans. Therefore, orchards treated with these compounds can be grazed following treatment.

Other insecticides that are quite specific to caterpillars include Intrepid® and Confirm®. These materials contain an insect growth regulator that mimics a natural insect hormone, 20-hydroxyecdysone, which induces molting and metamorphosis in insects. It is highly active on insects in the order Lepidoptera (moths and butterflies). Its unusual mode-of-action causes induction of a premature lethal molt within hours after ingestion of treated crop surfaces. This material has been excellent for control of PNC, hickory shuckworm, walnut datana, and webworms. When used in a tank-mix with a spreader/sticker, Confirm has shown an excellent residual capacity, lasting for up to 21 days after application. For a list of available insecticides, consult Extension Fact Sheet CR-6209, or on the Internet, go to the Pecan IPMPIPE site at: http://pecan.ipmpipe.org/.

Parasites and Predators for Control

Limited information exists on natural enemies for PNC. Although some beneficial organisms have been observed and collected from orchard populations of PNC, sufficient numbers for controlling PNC have not been documented. In 1983,
researchers collected 23 hymenopteran parasitoids and one dipteran parasitoid from first generation PNC larvae in Texas. These parasitoids were found to provide about 40% control. Currently, commercial rearing of parasitoids specifically for PNC is rare; however, they are found occurring naturally in several orchards. This represents another reason why limiting use of insecticides is recommended.