Stem and Pod Diseases of Soybean

Diseases that attack stems and pods of soybeans in Oklahoma are caused primarily by fungi. These diseases are favored by rainy weather, and may reduce seed quality and yield when severe. However, dry growing conditions that often occur in Oklahoma limit the amount of damage they cause. Severity of disease development is influenced by varietal selection and environmental conditions. Correct identification and early detection are critical in the proper management of soybean diseases. This fact sheet is intended to aid soybean producers in recognizing the diseases that commonly attack the pods and stems of Oklahoma soybeans. Diseases that attack seedlings and roots are described in Extension Fact Sheet EPP-7660, and diseases that attack foliage are covered in EPP-7672.

Pod and stem blight is a common disease in Oklahoma and a leading cause of seed damage and reduced seed quality. The fungus overwinters on seed or on old soybean crop debris. Infection usually occurs during the growing season and is favored by warm and wet weather.  However, symptoms do not appear until plants reach maturity  Delayed harvest during wet years increases the severity of this disease and leads to problems with moldy seed.

The most characteristic symptom of pod and stem blight is the development of black fruiting structures of the fungus that are arranged in linear rows on the stems (Figure 1), petioles, and pods. Seeds from diseased pods crack and shrivel, and are frequently covered with white mold. The moldy seed often will not germinate or will produce weak seedlings that are infected with the pod and stem blight pathogen. 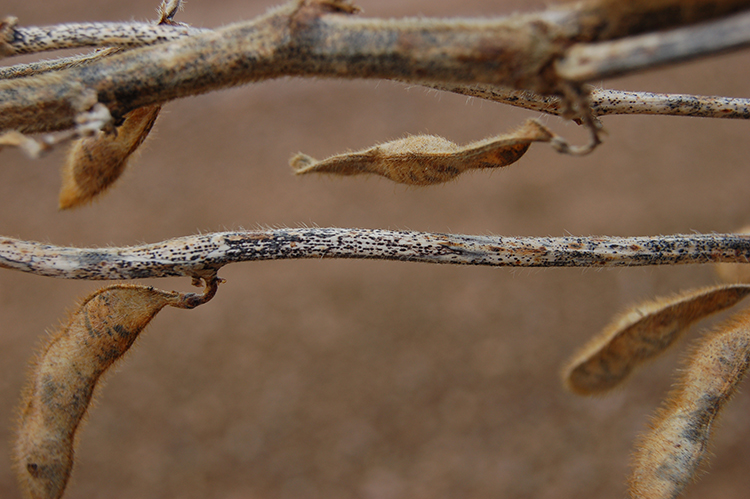 Anthracnose is a common pod and stem disease in Oklahoma soybean fields. Stem infections are of minor importance, but pod infections can reduce seed quality and yields. Although seedling infections do occur, anthracnose generally attacks more mature plants during the latter part of the growing season. Warm, wet, and humid weather conditions occurring during bloom and early pod set favor the development of this disease. 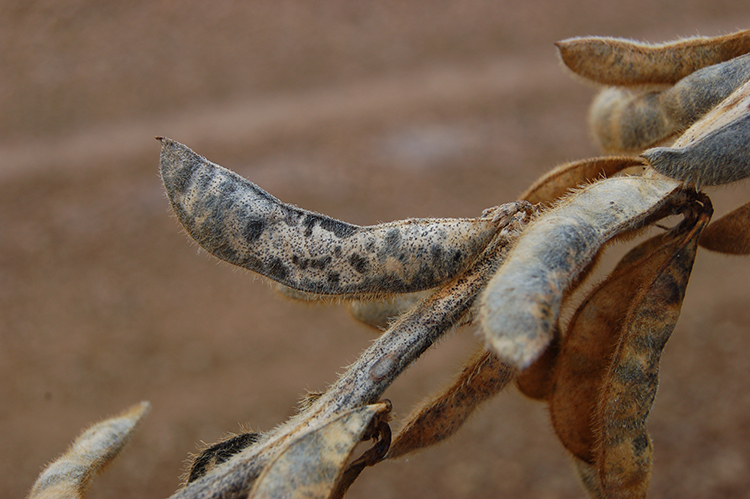 Crop rotation reduces the incidence of anthracnose. Anthracnose can also be controlled by applying fungicide to the foliage between bloom (R1 to R2) and early pod fill (R5). Fungicide application is more likely to be of benefit in protecting seed quality than in producing economical yield increases. Consult the OSU Extension Agents Handbook of Insect, Disease and Weed Control (Extension Circular E-832) or the Soybean Production Guide (Extension Circular E-967) available from your local county Extension agriculture educator for a current list of registered fungicides.

Stem canker, also known as southern stem canker, is damaging when severe because it kills plants prior to pod fill. Fortunately, the disease has not been common in Oklahoma.  Stem canker is favored by the presence of infested soybean residue on the soil surface and warm, rainy weather during late vegetative to early reproductive stages of crop development.

Symptoms first appear as reddish brown spots at nodes along the main stem during reproductive stages.  Spots enlarge into elongated, reddish brown cankers up to several inches in length (Figure 3). Leaves develop yellow and brown areas between the veins, roll inward, die, and remain attached to the stems. A toxin produced by the fungus contributes to the development of foliar symptoms and plant death. Yield losses occur when plants are killed prior to pod fill. 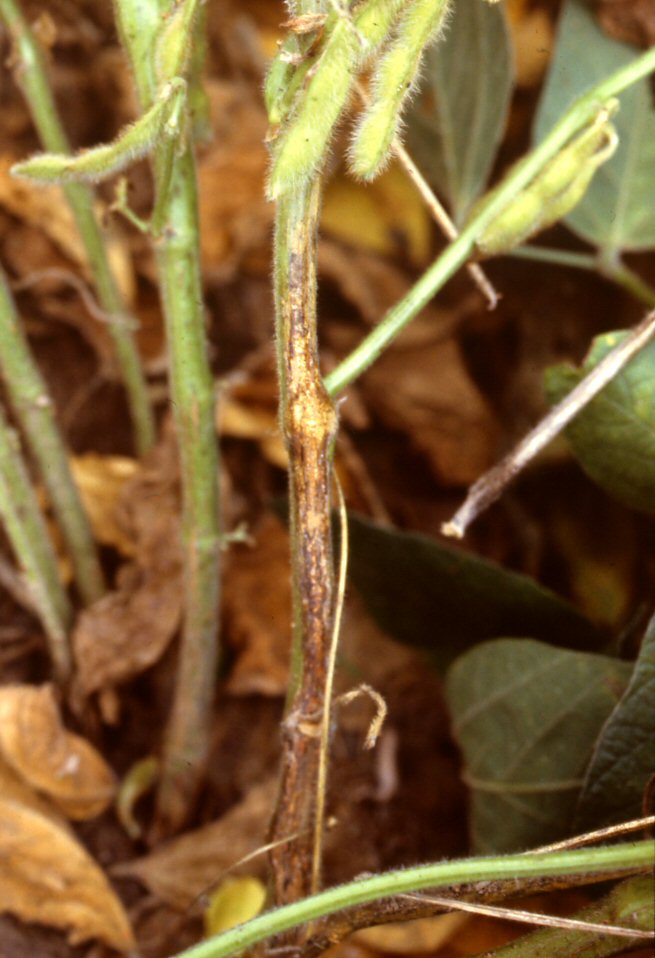 Control of stem canker is best achieved by planting resistant varieties. Varieties with excellent resistance have been released, particularly in full-season maturity groups. This has led to the gradual elimination of susceptible varieties from commercial production. Crop rotation and residue management are also beneficial for control of stem canker.