Scaled quail are known for their distinctive plumage. Both males and females have an overall blue-grey appearance with black tipped feathers on their breast, neck, and nape.  The “cotton top” name originates from the distinct white or grey crest that protrudes from the top of their head.  While males and females have very similar plumage, females have a lighter colored chin patch and a smaller amount of white on their crest. Scaled quail weigh 6 to 8.5 ounces (males are larger than females), which is slightly more than the average Northern bobwhite.  In western Oklahoma, the scaled quail and northern bobwhite (Colinus virginianus) (hereafter bobwhite) have overlapping ranges, and it is not uncommon to find bobwhites within scaled quail coveys, or vice versa.  While both species survive in arid locations, scaled quail in particular have the ability to persist in hot and dry weather that coincides with drought years.  Scaled quail generally prefer more open areas with lower shrub density and more bare ground compared to  bobwhite.  Where both species occur together, scaled quail can hybridize with northern bobwhites in low numbers.  These hybrids are often infertile, resulting in low levels of hybridization between species.

Scaled quail have a number of common vocalizations.  During the breeding season, male scaled quail will make a whistle similar to a “squak” or “whock.”  This is primarily uttered to attract females during the breeding season.  Another common call is a gathering or separation call that sounds like “chip-churr” or “chekar,” similar to the bobwhite covey call.  A final call is the “tsing” or warning call which is often used when a predator is sighted nearby.

Scaled quail are one of the most common quail species within the United States. These birds can be found in Kansas, Colorado, Arizona, New Mexico, Texas and Oklahoma.  While the highest Oklahoma population densities of scaled quail are typically found in the panhandle and south-western portions of the state, there have been documented sightings as far east as Jefferson and Alfalfa counties. Across their range, scaled quail have experienced long-term population declines. Results from a Breeding Bird Survey indicate populations may be declining as much as 3 percent annually.  Some potential contributors to scaled quail population declines include land use change, climate change, improper grazing and predator community changes. Little is known about specific population densities in Oklahoma.  Populations of scaled quail fluctuate with yearly variations in precipitation.  Increases in precipitation typically result in increases in population densities.  This boom and bust cycle is a natural occurrence for a number of quail species in the southwestern U.S.

Scaled quail are short lived species living approximately one to two years.  Annual adult survival has been documented to range from 25 percent to 36 percent.  Low survival rates are compensated by high levels of reproductive output during the breeding season.  This makes nesting one of the most critical times in a quail’s life.  Scaled quail typically begin nesting in late April and early May, continuing until late September or early October.  Nests range in size from 12 eggs to 14 eggs, however clutches as large as 22 eggs have been reported.  Eggs are white to cream-colored, usually with many light brown flecks or spots across the surface.  The average incubation period is between 22 and 23 days.  While females incubate the majority of nests, incubation by males has been documented.  Nesting success is often low, with nest success ranging from, 14 percent to as high as 64 percent, and re-nesting is common.  Very little is known about scaled quail reproductive behavior, but it is commonly agreed they are primarily monogamous, forming seasonal or temporary pair bonds with a single partner.  These temporary pair bonds provide the extra benefit of bi-parental care as males are commonly involved in brood rearing and vigilance.

At hatch, chicks weigh approximately 0.25 ounce, and as a precocial species, chicks will leave the nest within a few hours of hatching.  Chicks experience the highest mortality rates in the first ten days of life, as they are incapable of flying and are susceptible to exposure.  At about 14 days to 16 days they can sustain short flight in the form of hops and jumps and begin to develop significant feather insulation.  Chicks grow rapidly reaching adult weight at 22 weeks to 28 weeks.  As broods become older, they commonly grow larger in number as a result of brood mixing and adoptions.  Brood mixing allows adults with low numbers of chicks to leave their chicks with a formed brood, enabling females to potentially re-nest.  During the fall and winter, scaled quail begin to form coveys for predator and thermal protection.  While coveys have been reported to be as large as 150 individuals, an average winter covey in Oklahoma is typically between 19 to 37 individuals.  At night, coveys and broods will often roost in large groups or in small clusters of two to five individuals, which are often located in close proximity to other members of the covey.  Scaled quail commonly move large distances annually.  This often occurs prior to nesting during spring dispersal.  Some scaled quail have been documented moving as far as 60 miles, with movements between 10 miles to 25 miles being common.

Scaled quail have a diverse diet throughout the year.  During the spring and early summer months, primary food items include: insects, fruits, herbaceous vegetation and forbs. Herbaceous vegetation and forbs in particular play an important role in scaled quail diets in the spring and summer as they provide essential vitamins and minerals along with being a source of water.  In fact, quail derive much of their daily water needs from the food items they consume.  Additionally, nesting adults require large amounts of crude protein during egg laying and incubation.  Invertebrates such as grasshoppers, beetles and ants are an important food source for breeding adults and for developing chicks.  Chicks consume these insects to rapidly develop. Studies have shown that a quail chick’s diet should consist of 28 percent crude protein for optimal growth and survival.  High levels of protein enable quail chicks to fledge more rapidly, thus reducing their exposure to predation. During the fall and winter, scaled quail switch their diets to seeds and grains.  Some important seeds include; sunflower, croton, amaranthus, ragweed, common broomweed, snakeweed, and grain crops (milo and wheat).  Fruits and berries such as prickly pear and fragrant sumac are also consumed during late summer and early fall.

In much of western Oklahoma, sand sagebrush, fragrant sumac and sand plum are important vegetation cover for broods. During a typical day, broods will feed on insects, succulent forbs and grass during the early morning.  Green grasses and forbs typically have the highest water content allowing broods to acquire their daily water needs.  As the day progresses and temperatures begin to increase, broods will move to sand sagebrush, sand plum, yucca or fragrant sumac to locate thermal/loafing cover.  Quail chicks are very susceptible to heat stress, especially during the first 30 days of their life as they are unable to fully thermo-regulate.  Once temperatures begin to drop in late afternoon and early evening, broods move from mixed shrub vegetation types to feed before nightfall.  Bare ground is one of the most important aspects of any feeding area. The presence of bare ground allows chicks to move and forage effectively.  Bare ground is typically present in sandy soils, but in tighter soils, some type of disturbance such as fire or grazing may be needed. 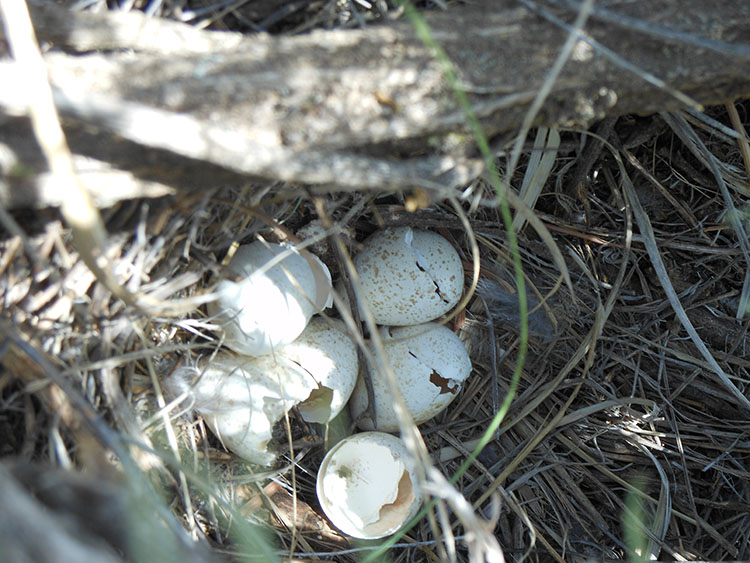 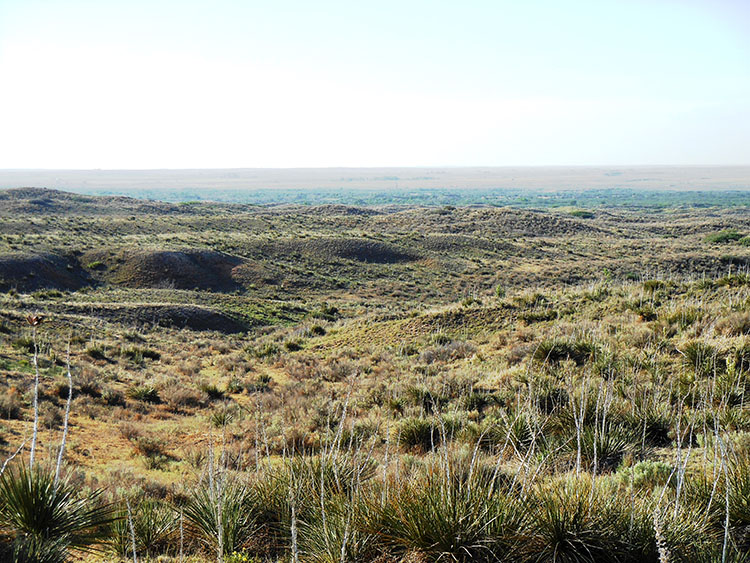 Loafing, escape and thermal cover are critical to scaled quail populations throughout the year.  Within western Oklahoma, this cover can be found in the form of sand plum, sand sagebrush, fragrant sumac and yucca. The shrub patches should be adequately wide (at least 6 feet to 9 feet) to provide protection from predators as well as shade for thermoregulation.  For ideal habitat suitability, shrub cover patches should be at least 10 percent to 15 percent of total land cover and should be distributed evenly across the landscape.

Preferred roosting vegetation cover varies throughout the year.  During brood rearing, scaled quail prefer to roost in open short grass with low levels of shrub cover.  This is commonly found in the form of sand sagebrush and yucca vegetation.  The sparse shrub cover and low vegetation height allows coveys to detect and avoid approaching predators.  These roosting locations tend to vary daily and as temperatures fluctuate throughout the season.  As nighttime temperatures decrease, scaled quail have anecdotally been known to roost in denser vegetation that provides warmth on cool nights.

In summary, scaled quail utilize a wide range of vegetation types throughout their life.  Mixed shrubs such as sand sagebrush, fragrant sumac, sand plum and yucca provide vital thermal and escape cover.  Mixed grass and forb vegetation types provide foraging and brood rearing sites with a rich array of food items for developing chicks.  To provide suitable habitat for scaled quail, it is important to have a varied assortment of vegetation types across the landscape that can be utilized throughout the day and year.